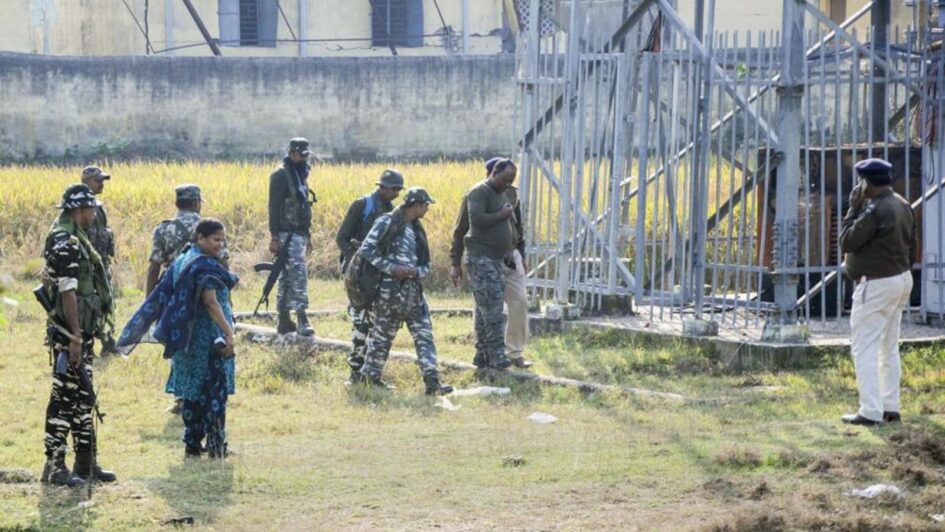 Aurangabad District, November 23, 2021: A squad of CPI (Maoist) cadres blew up a mobile tower and a community center-cum panchayat bhawan in Bihar’s Aurangabad district Monday midnight, police said on Tuesday. The blasts were triggered during the 72-hour bandh call given by the party in four states-Bihar, Jharkhand, Chhattisgarh and Uttar Pradesh-to protest the arrest of CPI (Maoist) politburo member Prashant Bose alias Kishan da, his wife Sheela Marandi and four aides in Saraikela district and the encounter in Maharashtra’s Gadhchiroli on November 13 where 26 Maoists were killed.

Scores of CPI (Maoist) cadres entered Jurahi village falling under Madanpur police station in Aurangabad district, which is close to the Jharkhand border, just past midnight and blew up the community center building and a mobile tower, said Aurangabad SP Kantesh Mishra on Tuesday. The SP added that though the tower was badly damaged, no one was injured as the building was empty when the high-intensity blast occurred.

The Maoists later disappeared into the nearby forest raising slogans against the government and security forces. According to villagers, the attack was apparently aimed at snapping telecom network to disrupt flow of information about their activities to security agencies.

Meanwhile, the 72-hour bandh call given by the Maoists, which began from November 22/23, evoked mixed response in the state. Though normal life was hit in some rural areas, urban areas were largely unaffected. In Barachatti and Sherghati sub-division of Gaya district, shops and business establishments were closed and traffic including on the 100 km stretch of Grand Trunk road (NH-2) was very thin. Several markets in Aurangabad, Arwal, Jehanabad, Nawada, Jamui, Lakhisarai and Munger districts remained closed.

Rail divisions across the state have also been asked to stay on alert during the 72-hour bandh. The rail section which are likely to be worst affected are Kiul and Jhajha falling under Danapur division and the Pandit Deen Dayal Upadhyay-Sasaram-Gaya rail section falling under Dhanbad division, said chief public relation officer (CPRO) of East Central railway.

Rajesh Kumar, the chief public relation officer of East Central Railway said that speed of trains in sensitive areas has been reduced to 75kmph from the normal 110-130kmph after a squad of CPI (Maoist) cadres blew up a portion of a railway track at Latehar (Jharkhand) and West Singhbhum districts on Saturday. According to the CPRO, speed restriction between 7pm to 6am and deployment of RPF and GRP personnel in important trains are among several safety steps that railways will implement during this period.

Earlier on Saturday suspected members of banned CPI (Maoist) blew up portions of railway tracks at Latehar and West Singhbhum districts and disrupted train services on Barkakana-Garhwa and Howrah-Mumbai routes.

“Railway tracks and bridges have been put under strict vigil from security point of view. Day and night patrolling has also been intensified. All necessary precautions are being taken to run passenger and goods trains safely,” Rajesh said.

RPF security commissioner, IG, S Mayank said an advisory has been issued and security personnel have been directed to focus on the Grand Chord line, which runs from Asansol to Deen Dayal Upadhyay junctions via Dhanbad and Gaya districts.