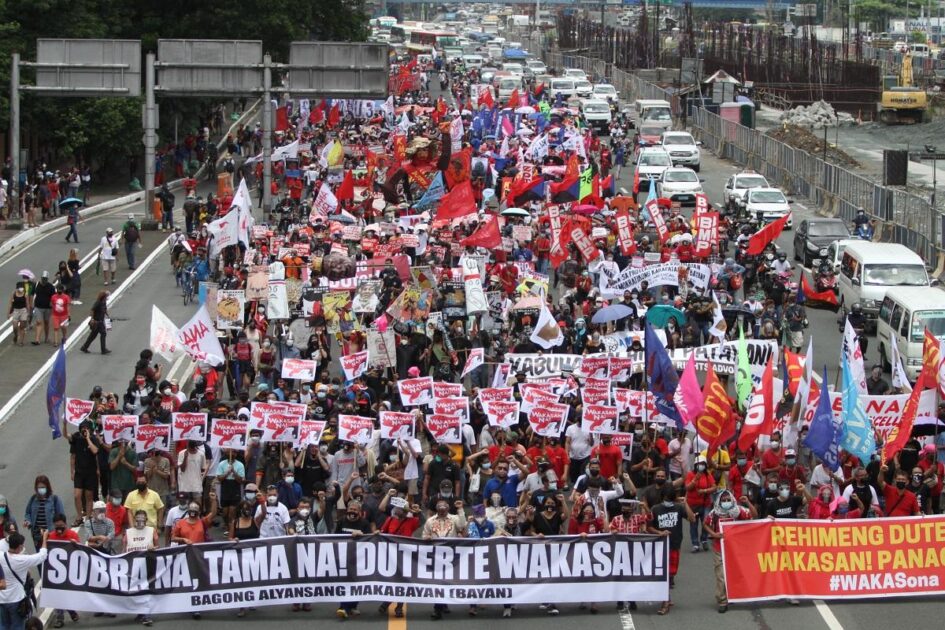 1. The number of daily new Covid-19 cases in the Philippines hit another record-high of 22,415 yesterday. This number is anticipated to further rise in the coming weeks with the prevalence of the more contagious Delta variant and in the face of the continuing failure of the Duterte regime to effectively respond to the crisis situation. With the gross lack of testing, the actual number of infections is likely two to three times bigger.

2. The Duterte government has shown complete lack of interest and ability to manage the pandemic. It has become an emergency-level imperative for the Filipino people to take urgent action to oust the corrupt and inept Duterte government the soonest possible time before the Covid-19 pandemic continues to worsen and completely overwhelm the country. The health crisis and continuing deterioration of the health system is clearly a political problem demanding a political solution.

3. The regime’s 2022 budget proposal shows complete disinterest in squarely addressing the pandemic. People are utterly incensed that the budget of the Department of Health (DOH), the Research Institute for Tropical Medicine (RITM) and the UP-Philippine General Hospital (PGH) were slashed while funds for counterinsurgency and infrastructure projects were increased significantly. On top of this, Duterte allotted himself a largesse of unauditable “confidential” funds.

4. Announced plans to resort to “granular lockdowns” are set to fail because there is a gross lack of testing and tracing which makes them arbitrary and ineffective. Local lockdowns could only be effective at the outset of the pandemic when infections were isolated and not widespread. Local lockdowns are set to be more stringent, oppressive and accompanied by abuse of power. People will suffer from greater hardships as local government units lack resources to assist those who will lose their jobs. However, with rising number of cases and continued lack of public health measures, the regime is bound to return to equally ineffective general lockdowns.

5. Scheduled investigative hearings in the Senate are being anxiously awaited for by the people. The people demand to know the lurid details of how Duterte and his underlings abused their power to realign billions of pesos of government funds to purchase overpriced medical supplies from favored Chinese companies. The people want to know how the bureaucrat capitalists profited from their money while they suffered from lack of public health measures, rising costs of medical treatment, joblessness, loss of income, lack of economic subsidies, growing poverty and hunger.