Cuba is not alone: KKE MEP speaks at the European Parliament’s Committee on Petitions (VIDEO) 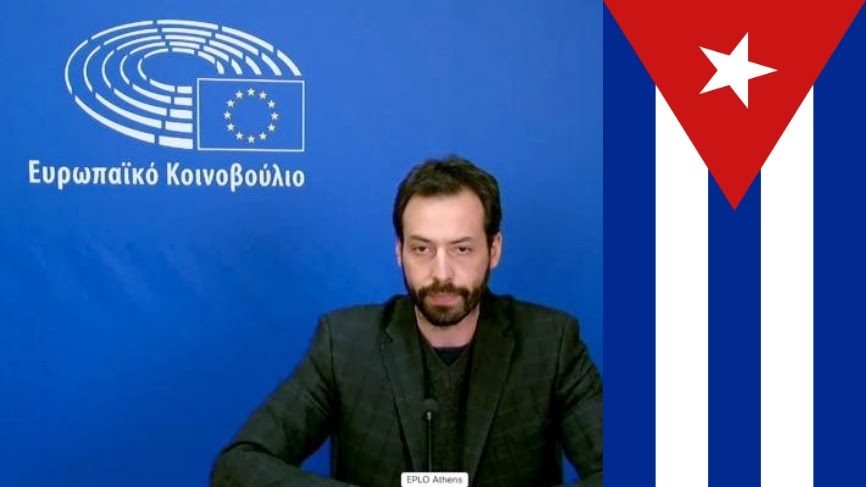 December 2, 2022 – From In Defense Of Communism
246 views
The European Parliament Group of the Communist Party of Greece (KKE) intervened in support of Cuba at a meeting held at the Committee on Petitions (PETI).

More specifically, as 902 portal reported, KKE MEP Lefteris Nikolaou-Alavanos denounced the criminal US blockade against Cuba, expressed the solidarity of the KKE towards the struggle of the Cuban people against imperialism and exposed the lies and slanders released by the EU and various MEPs, from social democrats to the far-right, concerning supposed “human rights violation” in Cuba.

These attacks against Cuba, the KKE MEP pointed out, are deliberate and geopolitically motivated, with the EU seeking to instrumentalize the consequences of the criminal US blockade. Therefore, Nikolaou-Alavanos said, there is a need for further escalation and strengthening of solidarity towards Cuba, for the immediate lift of the blockade and any kind of sanctions imposed by the imperialists.

The intervention of the communist MEP was quite inconvenient for some of the participants, including well-known anti-communist eurodeputies from the European People’s Party (EPP), the European Conservatives and Reformists (ECR) and the Liberals (Renew), who unsuccessfully attempted to interrupt him by shamelessly claiming that…  “communist propaganda will not be tolerated in the European Parliament”!

In his rebuttal, the KKE MEP noted: “It’s proven once again that all those who supposedly defend democracy and the exchange of views, resort to shouting, insults and characterizations when they can’t articulate a counterargument […] I listened carefully to what the petitioners – representatives of the “Cubanos por la democracia” organization – said, as well as the position of the representative of the European External Action Service. They didn’t say anything new. They repeated the known lies about “human rights violations” in Cuba. They distort the facts and insult the Cuban people who have vigorously resisted the economic and trade blockade imposed by the US and their allies. Against natural disasters, cyclones and serious accidents. Because it is the blockade that deprives basic services and goods, food, medicine and impedes the economic development of Cuba”.

Watch the full intervention of MEP Lefteris Nikolaou-Alavanos in Spanish:

EU’s concern for the rise of far-right extremism and racism is hypocritical, says KKE MEP

KKE: Solidarity with Cuba – Imperialist plans will not pass!

Not by Bread Alone, but Mainly by Platitudes