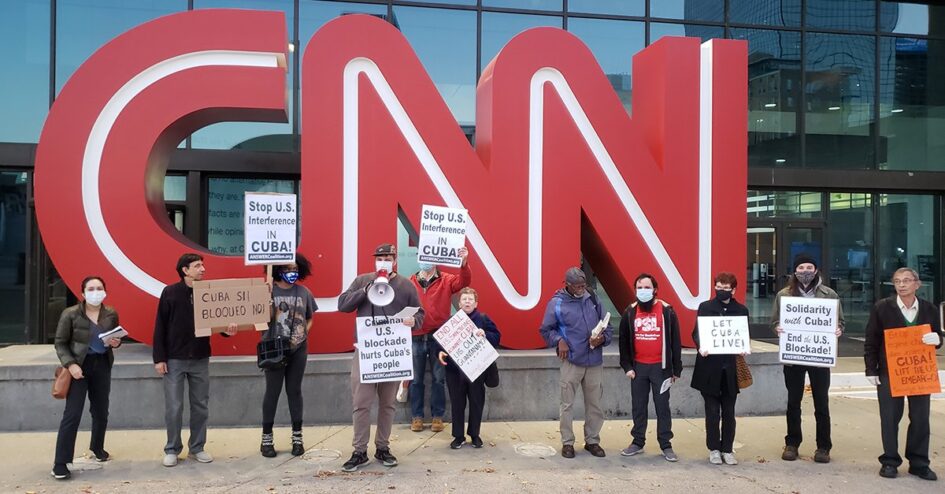 On Nov. 15, supporters of Cuba’s independence mobilized in approximately 20 cities in the United States to show their opposition to plots by the U.S. government to destabilize the country. The protests, which also took place internationally, demanded an end to the cruel U.S. blockade of Cuba.

November 15 was the day that fully vaccinated Cuban children returned to school and tourists were welcomed to the island — a crucial lifeline for the economy. Counter-revolutionary groups organized by the CIA were hoping to stage street demonstrations that day to cause maximum damage to society, but in Cuba and around the world they completely failed to draw mass participation despite endless promotion by the international corporate media. In the end, the streets belonged to the revolutionaries!

Washington, D.C: Defenders of Cuba came to a rally and counter-protest against right-wing, anti-Cuba demonstrators. The action was sponsored by Black Workers Center Chorus, DC metro Coalition, Code Pink and Friends of the Congo. Participants drowned out the right-wing protesters, outnumbering the counter-revolutionaries 10 to one.

Atlanta: At a rally called by the ANSWER Coalition and Party for Socialism and Liberation, housing activist Graham said, “When I see that Cuba can house all of its people even in the face of a criminal blockade and then I look here at home and see thousands on the streets in the richest country in history, I am deeply ashamed.” (Feature image: Atlanta, Nov. 15, rally calls attention to the role of capitalist media in promoting lies about Cuba. Liberation photo.)

During a rally in San Francisco, Gloria La Riva called in from Cuba. With the sound projecting over the busy intersection of Powell and Market, she described the calm in the streets, the flop that was meant to be a counter-revolutionary day of action and the sense of achievement and pride from the Cuban people toward the revolution for its response to the COVID pandemic and its incredible resistance against constant regime change plots. La Riva also underscored that the interests of workers in the United States lie in solidarity not with their imperialist government, but with the Cuban revolution. The action was organized by the ANSWER Coalition and attended by a wide range of organizations including Cuba & Venezuela Solidarity Committee; Venceremos Brigade – Bay Area; Saving Lives Campaign – Bay Area; International Committee for Peace, Justice & Dignity; Party for Socialism and Liberation; Task Force on the Americas; Committee in Solidarity with the People of El Salvador; Democratic Socialists of America – San Francisco; CodePink; Peace & Freedom Party and Labor Council for Latin American Advancement.

Listen hereto a Nov. 16 interview with Gloria La Riva on KPFA radio, where La Riva gives a first hand account of the situation on the ground in Cuba.

New York City: Opponents of U.S. intervention came out for a rally called by the New York – New Jersey Cuba si Coalition. Many protesters came with handmade signs proclaiming their support for the Cuban revolution and Cuban people. Notable in the crowd were Puerto Rican diaspora revolutionary activists. NY has the largest Puerto Rican communities outside of Puerto Rico, and many Nuyoricans see their struggle as inextricably linked with the Cuban struggle, as evidenced by the much beloved “Dos Alas” mural in East Harlem. This mural, depicting the faces of Pedro Albizu Campos and Che Guevara, has endured repeated defacement by right wing Cuban Americans, only to be restored over and over by the El Barrio community. Cuban, Puerto Rican, and Latin songs such as Guajira Guantanamera could be heard throughout the rally.

Boston: Activists mobilized by the ANSWER Coalition-Boston were expecting counter protesters but there were none. Instead, during one of the speeches they heard a young man shout “Viva Fidel!” from inside the Commons. He and his friends came and joined the protest until the end. Sussen from the July 26 Coalition, addressed the crowd: “Hands off Cuba! Hands off Guantanamo! Let’s visit Cuba! Cuba just opened its doors today and they are celebrating 90% of their population has been vaccinated against COVID. Kids are back to school vaccinated.”

Los Angeles: ANSWER organizer Cristian Alcaraz spoke about the absence of homelessness in Cuba, in contrast to the conditions in the United States. The rally was held in a location in downtown LA where unhoused people regularly gather.

At a speakout in Providence, Rhode Island, Max Binder of the PSL stated: “We stand with the Cuban people against U.S. intervention, because their struggle is our struggle. As working and oppressed people, we stand with Cuba because they stand with us.”

In Philadelphia, a rally was held at the Liberty Bell where members of Democratic Socialists of America, the ANSWER Coalition, Party for Socialism and Liberation and Workers World Party gathered to demand an end to U.S. intervention in Cuba. A counter-revolutionary demonstration was scheduled to take place at the same time and location as the pro-Cuba rally, but the right-wing action never materialized.

San Diego: Supporters of Cuba went out into the streets to educate people about the situation in the country. Zach Farber, journalist with Liberation News noted: “Overall people were extremely receptive … the moment we mentioned Cuba their eyes would light up.”

CPUSA denounces plots against Cuba, hatched in the U.S.

Cuba: In Yunior, We are Seeing the Creation and Performance of a Counter-Revolutionary

Biden, stop the U.S. war on socialist Cuba! End the funding of counter-revolutionaries and…