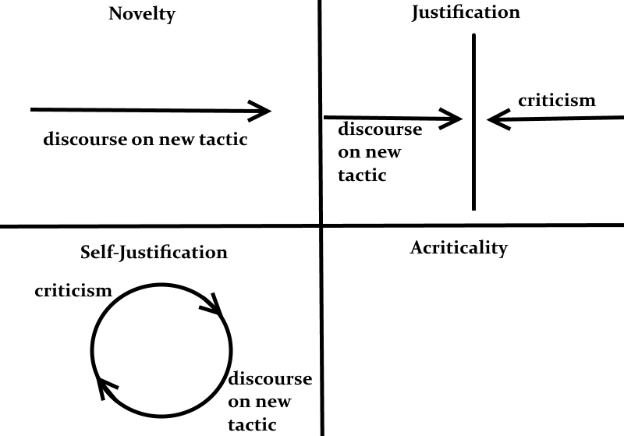 In earlier articles I have referred to the central problem of organizational materialism as “what are you really doing”, and the central project of organizational materialism as disregarding the justifications built around practices to look at real practical activity.  But it really isn’t so simple as that. The question ‘what are we really doing’ brings up another, connected line of thought: how do practices lodge themselves within movements and become popular, even across ideological divisions? We can’t handwave this away as being merely opportunism, or merely groups acting unthinkingly.  Despite the short historical viewpoint of most radical organizations, they are not staffed by fools, and despite the forever war that is the “is theory useful” discourse, practical discourses (about what we are doing and how we are doing it) are a constant din. And due to the short historical viewpoint and quick turnover of most activist organizations outside of small sects, we can’t argue that this is merely a product of history existing nightmarelike over the souls of the etc.  So a viewpoint which includes ideological & material differences must also include an explanation for how new practices become popularized across ideological differences, and how varieties of practices remain in use despite changes in the left’s organizational composition and ideologies.  This is a first step towards understanding this, one of my attempts to analyze the ‘micro-level’ of political organization.

In my studies I have argued that there is a trajectory that occurs to the discourses around these practices which has followed in a similar pattern in each individual case.  This trajectory goes from larger examples of strategies and means of organizing down to tactics and even the ways that individual terms ‘work’ within the left. This trajectory goes:

This trajectory occurs as a practice is used more and more, as they become less a tactic consciously used and more something which we unconsciously move to.  At first, a practice comes to us seemingly new. It may not be new, might be something relearned or recovered from an earlier stage of activism or ported over from another scene or country, but the effect is the same: there is a rush of thought on the applications of the practice or concept, a triumphant attitude suggesting that it has solved some major problem (which, indeed, it might have), and a generalized excitement.  We can see this in conversations about blockading highways during the early period of BLM protests, or about excited conversations on tumblr at the uses of materialism for analyzing LGBT politics.

But this period of excited novelty soon gives way to discussions, criticisms, challenges. This creates a discursive relationship between the criticism of the tactics and those who seek to defend it from those critiques.   Take, for instance, the arguments during the 90s about whether or not the left should use violence during direct actions. But the problem with these criticisms during a period of practical monopoly (where one strategy or kind of organization dominates the whole sphere, think parties in Europe during the 50s, or activism in the United States during the later half of the 20th century, or internet circles during the 10s) is that these discourses, these arguments between criticism and justification, slowly push in a direction which erases the real content of the criticism.

In a state of practical monopoly alternatives rarely exist readymade, the excitement about a novel tactic or strategy is precisely because what existed before had been ineffective.  But without a real alternative to cover the problems with the existing strategy, the conversations become more and more myopic.  Note that the conversation was whether to have violent or nonviolent direct actions, not necessarily whether direct action on its own was the worthy tool for every situation.

This leads to self-justification, the period in which both the criticisms and defenses of a tactic end up being turned into reinforcements of the tactic’s importance.  If the balance of organizational power persists, this leads to the last phase, wherein the tactic isn’t even seen as an object to be defended or criticized, but is done out of habit, as we wait for the newest novelty to come to us.

This cycle of novelty->justification->acriticality sees the left constantly chasing its tail, as it re-orients and revamps its goals around the new tactics bequeathed to us. But it also leads to the death of content, as phrases and tactics cease to mean what they originally meant and become a kneejerk response.  This occurred with ‘nonviolent civil disobedience’, which ceased to be a tactic among tactics to become the Left’s only response to any problem during the 90s, just as much as it happened with the phrases ‘nuance’ and ‘materialism’ within the social media left, which began as specific analyses and critiques and slowly degraded into meaning nothing at all.

This cycle is the product of a specific environment.  The existence of practical monopolies might be a natural cycle, but the degree to which this has afflicted the left comes out of the left’s organizational monopolization.  In my lifetime, the left has meant two things: intellectual circles, whether in universities or on social media, and activist organizations.  This axis has proven remarkably susceptible to this cycle.  But this critique is no less true in Europe, which has been dominated by party politics for years.  The ‘fix’ for this cannot be some newer new bauble, whether ideological or tactical. It has to come from a further diversification of the left’s organizations.