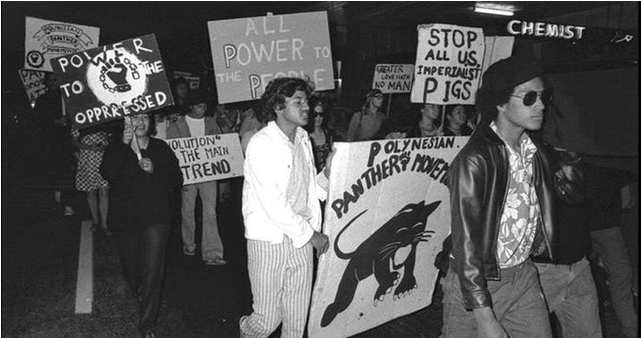 Beginning in 1974, New Zealand police armed with dogs repeatedly accosted Pacific Nation people, in their homes, in the early morning. The operations were carried out to arrest alleged visa overstayers. After these raids some of the adult victims were deported, their children being placed in state care homes. The early morning terror tactic became known as the “Dawn Raids.” I never saw such a dawn raid, but was present at something similar.

In 1973 I was visiting political friends in Auckland. One night a keen young anti apartheid activist called Joris De Bres took me on a regular action they called “Pig patrol”. At dusk, we drove to a run down old working-class pub and parked nearby. All was quiet as we got out of the car, seconds later all hell broke loose. Three police cars and a van roared up, screeched to a halt and their occupants ran into the pub, front and back doors both. There was shouting, screaming and crying heard within, several pub patrons, all of them brown, were dragged out and thrown in the van.

In those days we didn’t have cell phones to record with, one of our party scribbled down notes. A cop detached himself and came angrily over to us. “Are you with civil liberties ?” The idea of Pig Patrol was to try and curb the police attacks by presenting independent witness of the events. That may have had some limited effect but didn’t stop the on going onslaught.

This year, nearly half a century on, at a special ceremony in Auckland, the New Zealand Government apologised for the dawn raids. At around the same time, Pacific nation people were in the news for another reason. In a move aimed at filling low paid farm jobs, temporary labourers from Samoa, Tonga and Vanuatu will be able to enter New Zealand from next month.

This news, which has “really delighted” the fruit growing industry, reminds me of a grey 1974 winter day in Lower Hutt. I was splashing through mud, among old railway huts, looking for a Tongan worker who could speak English. The huts were being used as temporary worker accomodation. Comfortless and cold, the little sheds were home to young Tongan men for six months, while they worked at the nearby Ford Motor company. As an assembly workers union delegate it was my duty to try and represent these workers. Few of them spoke any English, which made representation difficult.

Things came to a head one night when we were working overtime. I got called across to the body shop, a young Tongan there had gashed his arm on a jig. The company medical adviser said he’d be okay to carry on with a bandage. I said no, he’s got to see a doctor. Before anything else happened I called a cab, hustled the confused young guy into it and we took off to casualty. The worker’s arm was stitched up and got ten days off work on ACC.

After that episode I sought out an English speaking Tongan to teach me a few words of the language. Everything was loaded against these workers.After six months employment in New Zealand, they had to return home, making way for a further contingent to repeat the cycle. The company got a revolving cycle of young fit men, eager to please and ignorant of their rights. It didn’t take too long for the temporary workers to learn what was what but all too soon their time was up. If they’d saved hard over the six months they had about enough to buy a cheap basic house in Tonga, to sit in unemployed, with raised expectations which could not be realised. The six month work scheme only lasted as long as it suited the bosses .When unemployment started growing in New Zealand the gate was shut tight and young Tongan workers got nothing.

It’s appropriate for apologies to be made for the infamous dawn raids. But as long as labour power is a commodity, controlled by the powerful against the powerless, there can be no justice.