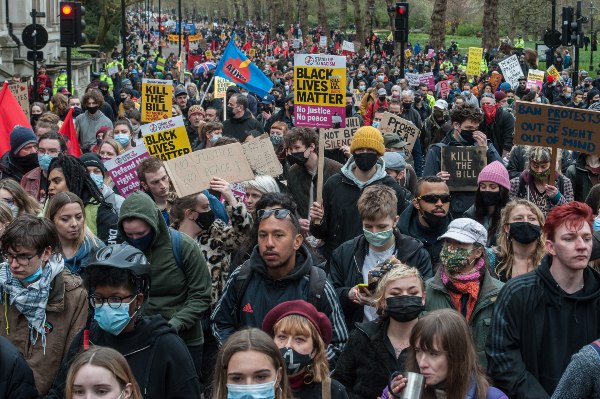 A day of action against the Tories’ protest-smashing police bill has been called for Saturday.

Demonstrations are set to take place in London and other cities to resist the Police, Crime, Sentencing and Courts bill.

It is currently going through its second reading in the House of Lords.

The Kill the Bill movement has joined Black Lives Matter groups, anti-racists and climate activists together in a coalition against the Tories’ repression.

This is because home secretary Priti Patel’s new bill hands the police further powers to limit any opposition to the Tories’ racism, sexism and denial of rights.

The best way to defend the right to protest is to use it by taking it to the streets.

Under the bill, the police will be able to impose any limitations they arbitrarily deem “necessary” on both static protests and marches

“Intentionally or recklessly causing public nuisance” will make a criminal out of anyone who causes “serious annoyance”—or even risks causing it. A protester can be locked up if they ought to have known their action would cause a disturbance.

But causing a disturbance to public life, making a noise, filling public spaces or blocking roads, is the intention of protests. Now the police will shut down protests they “reasonably” believe could be too loud.

The punishment? Up to ten years in prison.

And you could find yourself in prison for ten years if you tear down a statue of a slaver or racist too.

The bill had its second reading in the House of Commons less than a week after it was published, and was given just two days of debate.

Yet resistance to the police murder of Sarah Everard and police brutality in Bristol coincided with this timetable.

Attacks on protesters both in the wake of Everard’s murder and in Bristol showed why powers need to be taken away from the police, not more given.

And it’s not just protests under attack. The policing bill also targets Gypsy, Roma and Travellers.

The bill would give the police powers to fine Travellers up to £2,500.

They will even be able to send people to prison, despite a lack of legal stopping places for those living nomadically.

It also makes sentences for certain crimes longer and will see more disproportionate policing of black people and Muslims.

This is seen in the new police power to have the “automatic right to search those who pose the greatest risk” and allow for “known criminals to be stopped at any time”.

Now the Tories want to stop protests from having any impact.

They must be confronted and the law made unworkable.