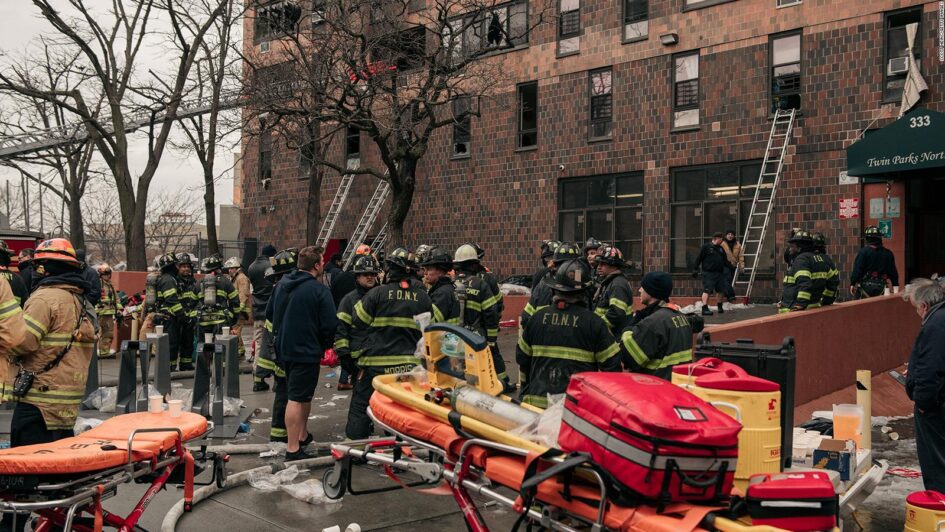 On January 5, a Philadelphia row house caught fire, killing 12 people. Just four days later, on January 9, a fire in a Bronx apartment building killed 17. In both cases, many more were injured and displaced. Among those killed were sixteen children. The tenants affected by both fires were working class and predominantly Black. Another common thread in both incidents: these deaths were almost entirely preventable. Just as with “natural disasters,” although the spark causing the incident may be accidental or beyond individual control, social and economic factors deeply impacted the severity of the outcome.

According to fire investigators, the Philadelphia blaze began when a child living in the house played with a lighter and a Christmas tree caught fire. The building did not have a fire escape or operational smoke detectors. Between its two apartments, 26 people lived in the house—well over the safe capacity.

Asked about the overcrowding, NBC Philadelphia quoted a resident who referred to the lack of affordable housing:

This was in fact an intact family who chose to live together. This is what we do. We don’t kick out our family members, our loved ones who may not have other suitable housing options.

Philadelphia is the poorest major city in the US. The economic crisis has left many people without decent work and inflation has affected costs of living, with rents in the city increasing by 11% in 2021 alone.

The Bronx fire started when a space heater malfunctioned and ignited a mattress in a bedroom. The fire did not spread very far, but smoke poured into the stairwell and spread through the building, causing most of the deaths. Self-closing doors in the apartment and the stairwell—designed specifically to prevent incidents such as this—failed to function and remained open.

The use of a space heater points to a building without adequate heat, forcing residents to seek other solutions. The Daily News quotes a firefighter saying that the building had not been renovated to comply with new city fire codes. The article also states that the building was subject to numerous health and safety violations, including one for defective fire-retardant material and several for lack of heat.

The Bronx building had recently been acquired by LIHC Investment Group, Belveron Partners, and Camber Property Group. These investment firms own several buildings that feature “low-income units.” They rake in millions of dollars from working-class tenants while leaving the buildings in unsafe condition. To make matters worse, Camber Property Group was founded by Rick Gropper, a member of Democratic Mayor Eric Adams’s transition team tasked with working on housing issues.

Approximately 200 FDNY members are operating on scene of a 5-alarm fire at 333 East 181 Street in the Bronx. There are currently 19 serious injuries to civilians. pic.twitter.com/R3pnXs8NlX

These tragedies are far from random accidents. They are the result of the capitalist housing market, which forces working-class tenants into crowded and dangerous conditions in order to make rent. The particular history of racial oppression and patterns of gentrification make this situation especially acute for Black and Latino workers. Subject to Wall Street speculation, rents rise as wages fall in relation to the prices of basic necessities.

To those who want to end this state of affairs, the connection between the Adams campaign and the slumlord murderers behind the Bronx fire is instructive. The Democratic Party and liberal legislation cannot be a vehicle for working-class interests. Gropper is not alone among those who fund Adams with real-estate money. Nationally, George Marcus, cofounder of both the real estate brokerage firm Marcus & Millichap and the Essex Property Trust, is a major donor to Democratic Party PACs and campaigns. So-called “lesser evilism” is for those who sleep soundly in safe houses.

In recent years, there has been a trend towards organizing tenants’ associations to lead struggles against the landlords for better conditions and against rent increases. Collective struggle is a healthy instinct. Historically, the most successful tenants’ struggles have been led by the labor movement leveraging the social power of the broader working class. The labor movement can also decrease the burden of housing costs by fighting for better wages and benefits.

In this era of crisis and economic stagnation, such victories will not come easily. Meaningful victories will require bold and militant tactics in which organized labor and tenants’ associations fight together on a class-independent basis. Ultimately, the working class needs its own party, armed with a revolutionary program and independent of real estate money and other capitalist influence. With such a tool, the working class can confront the centralized power of the capitalist state with a political force of our own, fighting for a program such as the one proposed by the IMT.

When the unity of the working class is combined with the right strategy and organization, there is no reason to stop at half measures. Workers can fight to cap rent at 10% of a tenant’s income. Everyone can be housed in safe and comfortable conditions using existing housing stock that today sits empty. Money currently flowing into the accounts of Wall Street profiteers can instead be invested in improvements and maintenance, as well as building any new housing that may be needed. These measures are not unreasonable. What is unreasonable is a social order that condemns people to death and homelessness for the profits of the capitalist class. We cannot tolerate that social order any longer.

Check out the new issue of Struggle-La Lucha:Amazon kills…