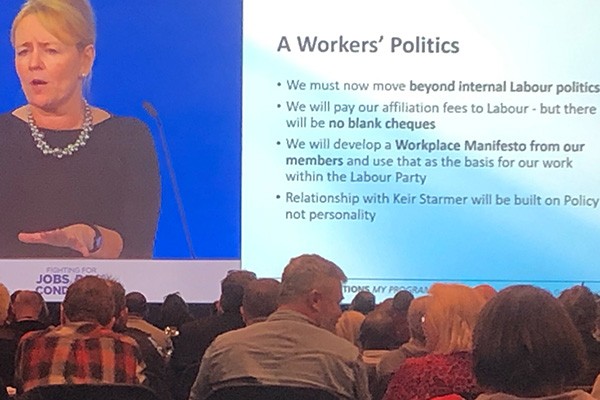 The conference came just a few weeks after the election of Sharon Graham as Unite general secretary. Graham laid out a clear vision to delegates that took up the themes of her election campaign.

She stressed that the union’s priority had to be to “create more power in the workplace” in the face of a growing onslaught from the Tories and employers. Graham argued that the attacks are likely to be worse than the austerity and pay freezes that followed the 2008-9 financial crisis. She said workers now face “2008 on steroids”.

She dismissed any reliance on Labour to defend workers, saying “Labour is not stepping up to the plate”.

At the centre of Graham’s plan is the creation of “industrial combines”. This involves bringing together workplace reps across each industrial sector to share experiences and develop strategies.

Graham linked this to what she calls the “top ten” strategy of seeking to make sure that the biggest firms in each sector Unite organises are unionised.

This should not be seen as simply as a desirable goal, perhaps at some point in the future. Without it, non-union firms will act as industry wide “pacesetters”, dictating pay and conditions to smaller unionised firms, she argued giving the example of Amazon.

Graham also linked this approach to the fight for equality. She suggested that black and ethnic minority reps, for example, in leading firms with large concentrations of such workers could be brought together to develop industrial bargaining plans that address inequalities at work, such as the race pay gap.

The emphasis on establishing industrial structures through combines rather than reliance on Unite’s existing regional and local structures has clearly ruffled some feathers in the union.

The key is that such combines must not simply become yet another round of routine meetings but rather launchpads for struggle.

One good sign is that in the run up to the conference a meeting of around 100 truck driver and warehousing reps took place which put out a call for a coordinated lunch break by HGV drivers and others on 1 November. How seriously the union pushes this will be one test of the new direction.

Another will be whether fights over fire and rehire, like the current strikes by Weetabix engineers, are escalated urgently with the aim of complete victory, not just replacing employer imposed attacks with union negotiated partial concessions.

Another motion while rightly arguing for a just transition to a decarbonised economy that defends jobs, also included support for false solutions such as carbon capture and storage technologies and the continuation of nuclear power. A contested debate also saw the conference vote to support calls for proportional representation for parliamentary elections.

Delegates also passed motions opposing the Tories racist “hostile environment” and supporting migrants’ rights. A unanimously carried motion declared, “A worker is a worker and has rights worth fighting for regardless of their nationality or ethnic origin”.

In the debate, speaker after speaker argued that low wages are not caused by migrants, they’re caused by bad bosses and weak unions.

Delegates also unanimously passed a pro-Palestinian motion supporting the Boycott, Divestment and Sanctions campaign and calling for Unite branches to affiliate to the Palestine Solidarity Campaign.

Unfortunately a separate motion calling on the union to “dissociate itself from the IHRA definition of antisemitism” was not moved and so was not voted on.

Conference also underlined that the left in Unite is in flux. The United Left which has been the dominant force and which backed Steve Turner in the general secretary election is in decline and some disarray.

A positive sign was that a meeting of delegates who supported Graham election campaign was held in Liverpool on the eve of conference with around 100 attending.

A new left in Unite is needed, but it must also reach out to those who voted for Turner, sometimes out of a mistaken fear of the right wing candidate Coyne being elected, but who are open to the kind of more combative workplace orientated stance Graham is putting forward.

This means too that a new left has can’t primarily be an electoral machine, but instead it has to be a focus for building resistance and solidarity.

The Philosophy of Money with Graham Hubbs