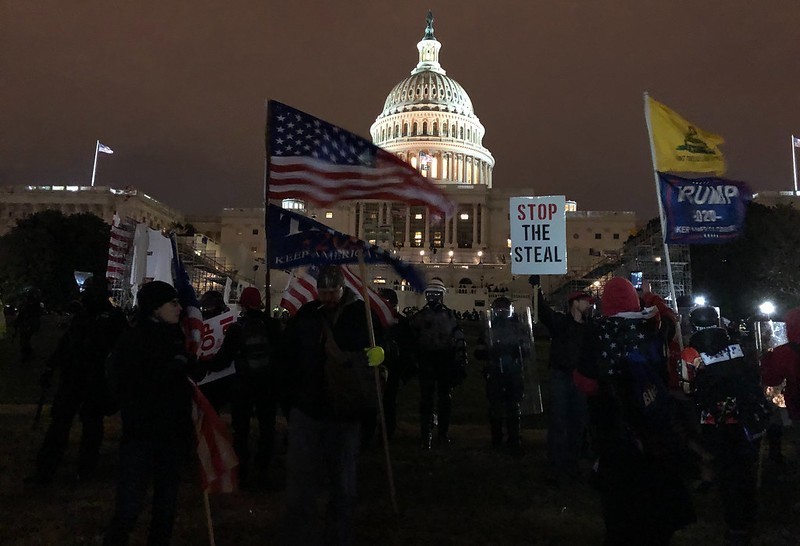 It’s been one year since we first saw the shocking footage of the mob of violent Trump supporters, egged on by the defeated president, breaching the Capitol, attacking any who stood in their way, and strutting through the halls of Congress with Confederate flags.  The deadly event was commemorated last week by elected officials and in the media. But as usual, zeroing in on just that day deflects attention from the forces that enabled the January 6th insurrection to happen at all.  The events of that day, however significant, can be seen as a point on a trend line that stretches at least from the early 2010s, when their leader fostered the white supremacist “birther” movement and perfected the methods he has used to lie so effectively to his supporters.

By the time we reached January 5, 2021, the plans were set for a major offensive of this movement.  Far-right forces had raised millions to underwrite the “Stop the Steal” movement, travel and housing arrangements had been made by Trump supporters from around the country, and dozens of lawmakers had announced their decision, without any evidence of fraud, to vote against certification of the election.  Then at the Ellipse on the morning of January 6, Trump and his allies whipped up the mob, telling them, “If you don’t fight like hell, you’re not going to have a country anymore.”

The commemoration of the one-year anniversary was a struggle over the narrative that is told about the January 6th insurrection. Speaker of the House Nancy Pelosi proclaimed that it is our “duty to establish and preserve the narrative of that day,” while President Biden deliberately took a historical perspective by co-authoring his speech with historian John Meacham.  That narrative has received a beating over the past year. Fox news anchor Tucker Carlson told his audience that “January 6 barely rates as a footnote,” while Representatives Matt Gaetz and Marjorie Taylor Greene proclaim it a “fedsurrection” master-minded by federal agents to discredit Trump supporters.

The insurrection was white supremacist at its core.

A revision of history closer to home is the idea on the part of some self-styled “left” forces that January 6 was a “white workers’ uprising,” the culprits of which are deserving of our sympathy and attention.  This idea has been shown to be false by the evidence about who were the actual perpetrators of January 6. Instead of representing the working class, the majority of those charged with offenses are 93% white and 86% male, leaving huge sections of the working class unrepresented among them.  According to a major study by the University of Chicago, those charged with crimes for January 6 are  older and less likely to be unemployed than other right-wing extremists charged in recent years, and included many business owners, professionals, real estate brokers, and corporate executives. Of those charged in the insurrection, 87% were unaffiliated with right-wing groups like the Proud Boys or the Oath-Keepers, so focusing our attention on just these groups will miss the bigger movement.

Furthermore, the political scientist Robert Pape found that the insurrection was white supremacist at its core, just as the People’s World predicted it would be, with the primary motivation of participants being “fear of the ‘great replacement,’ the belief that the rights of minorities will overtake that of whites,” according to Pape and his colleagues at the University of Chicago. As Jamal Rich wrote for this website, “There was no revolutionary character to this insurrection, as it was financed and provoked by reactionary sections of the ruling class and the fascist street thugs that carry water for them.”

The right-wing organizations that led the insurrection are . . . “evolving into a violent mass movement.”

The commemorations over the past week or so have shown us what strategies the different actors will take going forward. President Biden at last directed his fire at Trump, calling out the big lie that the 2020 election was illegitimate.  Attorney General Merrick Garland reiterated the commitment of the U.S. Justice Department to pursue and prosecute all those who committed crimes on January 6, but he failed to justify the slow pace of the prosecutions or the leniency of the sentences handed down so far.  Democrats in Congress argued for the urgent passage of election reform legislation.  Most Congressional Republicans spent the day in denial, ignoring the commemoration and downplaying the significance of the event.  Fascist and other anti-democratic forces dug in, reiterating lies and making up new ones.  The right-wing organizations that led the insurrection are, in Pape’s words, “evolving into a violent mass movement,” with Trump as its leader and a willingness to use violence in pursuit of fascist aims.  How we address this struggle is one of the chief questions facing the country.

Divergent narratives have resulted in stark differences in the memories of Democrats and Republicans about that day.  About 90% of Democrats but only about four in 10 Republicans recall the attack as very or extremely violent.  The movement that the insurrection represents, according to Pape, is only poised to grow because all the ingredients for growth are there: a leader who supports extra-legal actions, grievances over the supposedly stolen election, and now the focal point of January 6. We call on the working class and trade unions to help lead the fight to defeat the fascist movement that the insurrection represents.

As Rev. William Barber said, “January 6th is still going on.” The direct assault on voting integrity that the insurrection represents continues unabated.  According to the Brennan Center, more than 440 bills with provisions that restrict voting access were introduced in 49 states last year, and 19 states passed 34 laws restricting access to voting.  Some make it more difficult for working people, the elderly and disabled, and voters of color to cast votes at all, and others give partisan election officials the authority to disregard some votes completely.

The Program of the Communist Party USA acknowledges that the “constant struggles of the working class to expand its political power and opportunities are struggles to expand democratic rights.” We have long fought for expansion of the franchise, an end to gerrymandering, and elimination of corporate money in elections, in the interest of enhancing the autonomy and independence of the working class.

Over the next month or so, our representatives in Congress have the opportunity, perhaps the last one, to make progress in these areas.  The John R. Lewis Voting Rights Advancement Act of 2021 and the Freedom to Vote Act would overturn some of the most anti-democratic provisions in the legislation passed recently in the states.  We must demand that our elected representatives support this legislation and expose them if they fail to do so as de facto agents of the continuing January 6 insurrection.

Cuba faced with reactionary provocation – How to defend the revolution?

Why We Must Defend Julian Assange