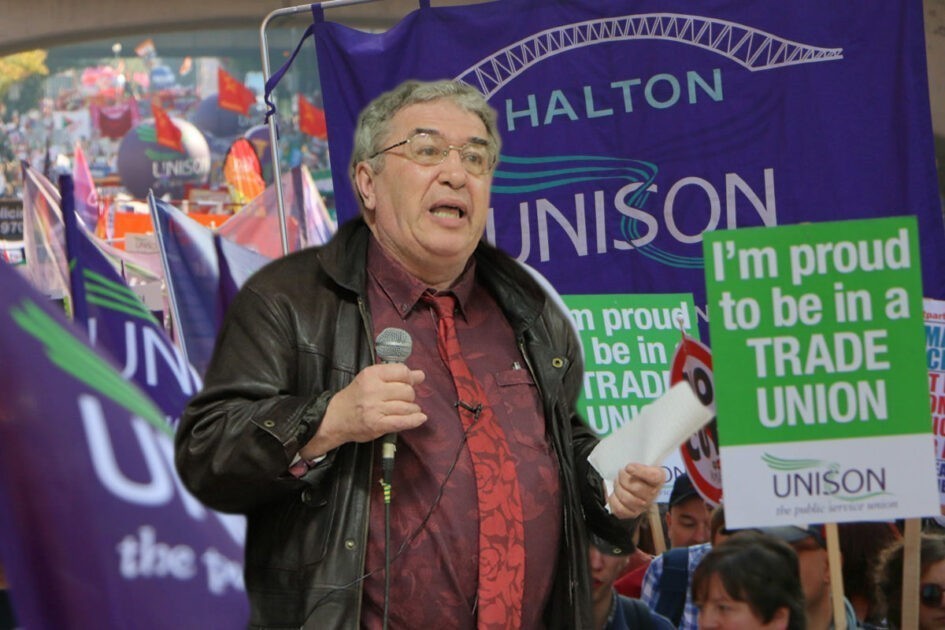 The knives are out for Paul Holmes, the newly elected President of Unison. An unholy alliance of employers and union bureaucrats is trying to victimise him and get him sacked.

It is vital that the left in Unison takes back control of the union – and if necessary takes this battle to the entire membership.

Paul Holmes has a long history as a fighter in Unison, and has been a consistent thorn in the side of the union’s right wing. He has been a member of Unison for more than 40 years, and is branch secretary in Kirklees Unison, one of the ten biggest branches in the country. He has been elected to the national executive eight times.

This year, Paul narrowly failed to become the general secretary of Unison, after the left vote was split three ways. This allowed the right wing candidate, Christine McAnea, an assistant general secretary, to win.

Paul nevertheless came second, thanks in part to his pledge to take a salary of only £32,000 and donate the remaining £100,000 to charity, which helped him to achieve the highest percentage vote ever achieved by a lay officer.

Shortly afterwards, Paul – along with his supporters in the #TimeForRealChange group – swept the board in the elections for the union’s National Executive Committee (NEC). These left activists were elected on a programme to defend members’ jobs and conditions, which would make a difference to Unison’s low-paid members.

Paul was duly elected as the president of the union to carry out this programme. He was also elected to represent the union on the General Council of the TUC. Incidentally, all NEC members who voted in these elections knew that he was suspended. The right wing, especially the officialdom who have controlled the union for 20 years, find this intolerable. They see it as a threat to their perks and privileges – and their massive salaries. Moreover, they regard the new left NEC as a threat to the cosy relationship they have enjoyed with the employers, not least in the NHS and councils.

As a result, they have been gunning for Paul Holmes. Shamefully, on undisclosed charges, clearly trumped up, Paul has been suspended for 20 months by Unison officials from holding any union office. His branch of 10,000 members has also been suspended.

In addition, Paul was suspended from his job by his employers. Incredibly, the union backed the council’s secrecy over the charges, saying they were “confidential”.

It doesn’t take much to understand that Paul’s suspension from the union is a plot hatched by the right wing bureaucracy – in collusion with his Labour council employers – to get him suspended, and hopefully sacked, thereby losing his position in Unison.

The council is now holding a protracted hearing into the hidden charges against Paul. This is planned to begin on 6 September, hosted at a four-star hotel three-and-a-half miles outside Huddersfield, and is set to last five or six weeks.

There have been secretive meetings with full-time officials, who were told that they have two years to overturn the democratically elected NEC.

This cabal is busy working to block and frustrate the left leadership at every turn. And as part of this, they are determined to get rid of Paul.

Recently, in the face of attacks by Keir Starmer on its president, Ian Hodson, the bakers’ union (BFAWU) threatened to disaffiliate from the Labour Party. Unison, by contrast, has done nothing to defend its president against these attacks from his employer. Remarkably, Christine McAnee, the Unison general secretary, is refusing to publicly defend Paul as president over this issue.

We are dealing with a bureaucracy that is prepared to go to any lengths to maintain its power, privileges, and income.

Of course, most crucially, behind this bureaucracy stands the ruling class, who are extremely keen to keep Unison – the biggest union in Britain – in the hands of their loyal supporters. The charges against Paul were clearly trumped up, and will not stand up to scrutiny. Coincidentally, the employers suspended Paul at the exact same time as the union did, giving similar reasons. But both ‘enquiries’ have so far lasted for 21 months!

Unison’s right wing leadership has a history of suspending people, as a convenient way of removing ‘troublemakers’. Without doubt, this is why Paul has been suspended also.

When attempts were made to resolve this scandal and to lift Paul’s suspension, they were blocked by the officialdom. Then nothing happened for 19 months! Paul wasn’t even interviewed by the union in this time.

In other words, obstacles were being placed in the way by the officialdom, who were happy for Paul to carry on being suspended, and to be barred from his union activities of representing members.

No doubt, the internal ‘investigation’ into Paul’s case will take another 20 months or longer, until the new elections in 18 month’s time.

What right do the union officials – who (according to the rule book) are supposed to be the servants of the NEC – have to block the democratic will of the elected lay leadership?

This is nothing short of a coup against the membership. They must not be allowed to continue to block the lay leadership. Unison, according to the rules, is supposed to be a lay membership-led union – not one dominated by an unelected bureaucracy acting in its own self interest.

Up until now, this bureaucracy has acted in the shadows, behind the scenes, to frustrate the elected leadership. It is about time this scandal was exposed, so that the members can see what is going on and call these unelected officials to order. Under the previous general secretary, Dave Prentis, Unison’s leaders were the biggest obstacle to building a coordinated campaign against the cuts and attacks on the public sector.

Together with the TUC officialdom, they played a divisive and destructive role during the pension’s dispute of 2011, when three million public sector workers went on strike. They were at the centre of the capitulation to the government’s terms.

With their actions, Unison officials are bringing the union into disrepute. It is vital that the new NEC tackles this crisis head on. Only by doing this will the union be able to fully concentrate on its real job of representing the members.

Unison is supposed to be a democratic, lay-led union. This must be put into immediate practice. Paul Holmes, the elected President of Unison, must have his suspension lifted immediately. Likewise, the suspension of the Kirklees branch of Unison must be lifted, to allow it to function and represent its members.

An injury to one is an injury to all. Paul Holmes is the president of the biggest union in Britain. We therefore call for the maximum solidarity with him across the labour and trade union movement.

In particular, Unison members should pass resolutions in support of their president, and inundate the general secretary with protests about this injustice.

Paul’s supporters have organised a solidarity rally – in person and online – on the first day of the council’s hearing, at 9am on 6 September outside the Clarion Cedar Court Hotel in Huddersfield. Click here for more details.

20. Details of lobby in support of Paul Holmes 6 September 👇✊ pic.twitter.com/kQIeLq3OQK