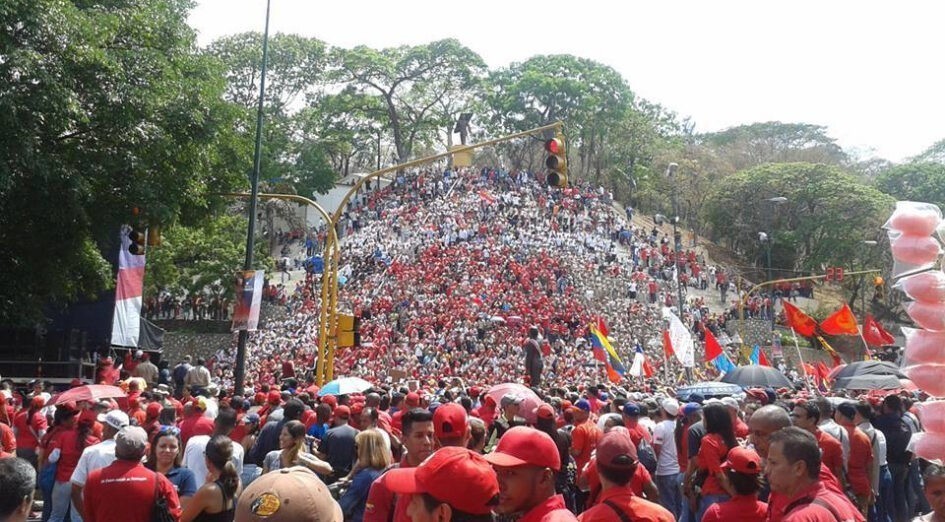 In response to the u.$. recognition of the treacherous comprador Juan Guaido, the president of the equally treacherous national assembly, as the “legitimate” president of Venezuela, Nicolas Maduro has moved to cut all diplomatic ties with them. The international response further exposes the sharpening contradictions in the world, where old alliances are now being forsaken in favor of national and expansionist interests. Turkey’s Erdogan, a violent anti-communist and ruthless expansionist tool of u.$. empire, responded to the new developments by pledging Turkey’s support to the Maduro government. Mexico’s Obrador also came out in support of Maduro in defiance of Mexico’s typical boot-licking foreign policy regarding the united $tates. Their reasons are far from humanitarian, but nevertheless expose deepening fractures in the western imperialist camp.

A great many countries have still come out in support of the u.$. backed cronies in Venezuela, however. The Organization of American States (read: $nakkkes) (OAS) has come out staunchly in favor of the new opposition government, with the secretary general taking to twitter to “recognize” Guaido as president of Venezuela even when Guaido himself was only gesturing a “willingness” to serve as interim president. The response on the part of the imperialists and their lackeys is nothing short of premeditated, and demonstrates the very expensive network of spies, saboteurs, and treacherous interests that firmly connect the “opposition” in Venezuela and amerikan imperialism.

But what is their game? What advantages come with recognizing Guaido as president of Venezuela in contradiction with all the legal and electoral processes of the country? On the one hand, the west recognizes the advantageous position of the standing national assembly that, though it has been declared “null and void” since 2017 while in contempt of the supreme court, represents an official body that is still capable of carrying out the basic functions of a government in contradiction with the executive and judicial branches of the Venezuelan state. By recognizing Guaido as president, and the national assembly as the legitimate democratic body in the country, the imperialists have solidified a semi-official interim government that they can negotiate with as such on the international stage. This government can make formal requests of the united $tates, and their dealings can now happen more or less in the open, instead of through shadowy intermediaries, monopolists and backroom embassy meetings as before.

There is a qualitative aspect to this new phase of imperialist maneuvering in Venezuela. Previously the pro-imperialist clique were dealt with on the international stage as an internal opposition within a recognized government. International relations were still by and large carried out with the Bolivarian government (or at least at them), and while funds, resources and agents were sent to the opposition to help them with the back-end operations, they could not operate with the legitimacy of a government on the world stage, and therefore could not circumvent the Bolivarian government in international relations. Now they can do that, and their powers to call upon the international community that recognizes them no longer suffers the limitations of democratic responsibility or due process. By initiating article 223 of the Venezuelan constitution, a state of revolution (or, counterrevolution) has effectively been declared.

The series of small mutinies that have gone on so far, normally aimed at stealing and distributing weapons to “activists” in major cities, exposes the very real danger that this new phase poses. It is unclear to what degree the military is affected by comprador-rats and traitors, but it is clear that the majority remains loyal to Maduro and the Bolivarian government. A military coup may not be possible, at least not yet, but the threat of foreign intervention still looms. Both Brazil and Colombia have made threatening overtures to Venezuela on behalf of their own reactionary bourgeoisie and at the behest of the amerikan imperialists. Bolsonaro recently demanded “democratic transition” in Venezuela while waging a simultaneous internal war on leftists, especially communists. Meanwhile a flood of arms and individuals with paramilitary connections have been entering the country from Colombia. Whether open armed conflict is yet an option is another matter, but it is one that the imperialists have not yet ruled out.

The Limits of Social Democracy

A large factor in the ability of the reactionaries and comprador-rats to mobilize so openly has been the absolute adherence to bourgeois-democratic principles by the Bolivarian government, principally the PSUV. Even taking into consideration the immense pressure exerted on Maduro’s government by imperialism, this is not an uncontroversial position. Within the Bolivarian camp the Communist Party of Venezuela (PCV) has routinely made the criticism that the PSUV’s unwillingness to combat capital directly, as well as lethargy in combating the opposition generally has resulted in the intensification of the crisis. The soft-privatization of the food distribution centers, the bureaucratization of national industries and the general defense of private ownership even in the face of economic sabotage has protected the social base for pro-imperialist reaction.

The continued dominance of vast private monopolies and the preservation of private property by the PSUV ensures that the economic levers utilized by the opposition to instigate and deepen the crisis in Venezuela remain intact. While important advances have been made in the consciousness of the proletariat in the seizure of factories belonging to the imperialist and comprador bourgeoisie by the workers, the bureaucratic leadership of the PSUV have been mostly satisfied with waging a parliamentary, not class struggle. Certainly the proletariat have gained considerably through their united front with the progressive national bourgeoisie, its leadership has ultimately hindered them in their struggle against capitalism-imperialism and its fifth column in Venezuela.

While impressive strides have been made to free Venezuela from the grip of neocolonial and imperial rule, the state under the PSUV still chiefly represents the interests of the bourgeoisie, albeit the progressive segments of the national bourgeoisie. The proletariat and their organizations have gained substantially in these conditions, but must eventually take the lead in fighting the opposition. The final resolution to the crisis cannot come but with the suppression or destruction of the interior classes who invariably side with u.$. imperialism, namely the comprador bourgeoisie and their goons among the reactionary petty bourgeoisie. While the communists are correct to maintain their united front with the progressive national bourgeoisie, the leadership of backward bureaucratic elements must eventually be overcome to defeat capitalism-imperialism.

The Tasks of Anti-Imperialists

So far no war has broken out between the united $tates and Venezuela. It may not, but that should not imply that it cannot. Our obligations are nevertheless the same as always, regardless of whether a state of war exists, and we should not allow the myopia of the liberal anti-war movement to further compound apathy toward the bulk of amerikan imperialist activity. Where no war yet exists, we must fight the mobilization for one, and direct those in the anti-war movement away from the nearsighted neoliberal leadership that has relegated the struggle against mobilization to a secondary or tertiary task. It is not enough to respond to conditions as they arise. We must be proactive in opposing imperialism at its very foundation, and building ideological unity around that. It is not enough to demand peace, we must fight imperialism.

Therefore, some general tasks for anti-imperialists are as follows:

A poem in solidarity with the Bolivarian Revolution