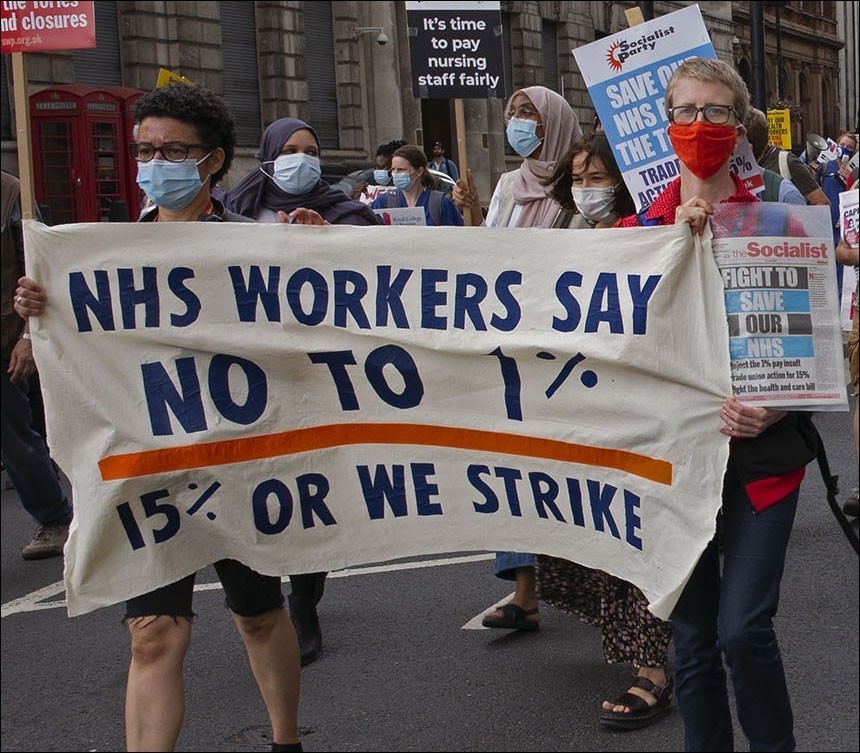 From The Socialist newspaper, 11 August 2021 Complacency, incompetence, cronyism, corruption and downright cruelty. As many as 150,000 deaths.

That’s the real Covid record of the Tories and working-class people have paid for it. Amid criminal shortfalls in staff numbers, bed shortages and inadequate PPE – the result of years of privatisation and austerity – NHS and care staff have worked themselves to exhaustion to save lives.

Since last summer, NHS workers have protested for a 15% pay rise. The Tories’ response? After the initial 1% slap in the face they’ve been forced under pressure to offer 3%. But NHS workers have lost around 20% in the last ten years. For the rest of the public sector the Tories are offering between 1.5% and nothing!

But where is the opposition from the Labour Party? Right-wing Labour leader Keir Starmer has meekly nodded along with the Tories all year. He only thought NHS workers were worth 2%! But he hasn’t shown the same mildness in his party, ruthlessly driving out Jeremy Corbyn and the anti-austerity programme that demanded an end to cuts and privatisation in the NHS. Workers need our own political voice – we need a new mass party of working-class and young people.

And we need a fightback – to take to the streets and organise in our workplaces. We call for a national demonstration in the autumn for a public sector pay rise, to defend the NHS, and to prepare the ground for national coordinated strike action.

Socialist Party members are campaigning for a vote to reject the 3% offer and vote for strike action in the NHS trade union consultations.

The Tories’ Health and Care Bill is presented as being about integration of the NHS and social care (and who doesn’t want that) but in reality it is a plan to accelerate privatisation of the NHS, reduce the little democratic oversight that currently exists, and open the door to breaking up a national service.

It is only through mass workers’ struggle, linked to fighting for a working-class political voice, that we can establish a fully funded, publicly owned and democratically controlled NHS and social care system – a socialist NHS!

NHS: Kick out the privatisers, Fight for funding, Build for strike action

Thanks to the miners – an example of workers’ struggle and solidarity

Rising against a rigged and rotten system – Socialism 2021

A day in the life of a young hospitality worker

Review – The Struggle for World Socialism

Waltham Forest: Fighting for a home for Nadia and homes for all

August 1991 – The aborted military coup in the ‘Soviet Union’

You need a union when the time comes to fight

Over 3,000 votes for fighting socialist programme in CWU