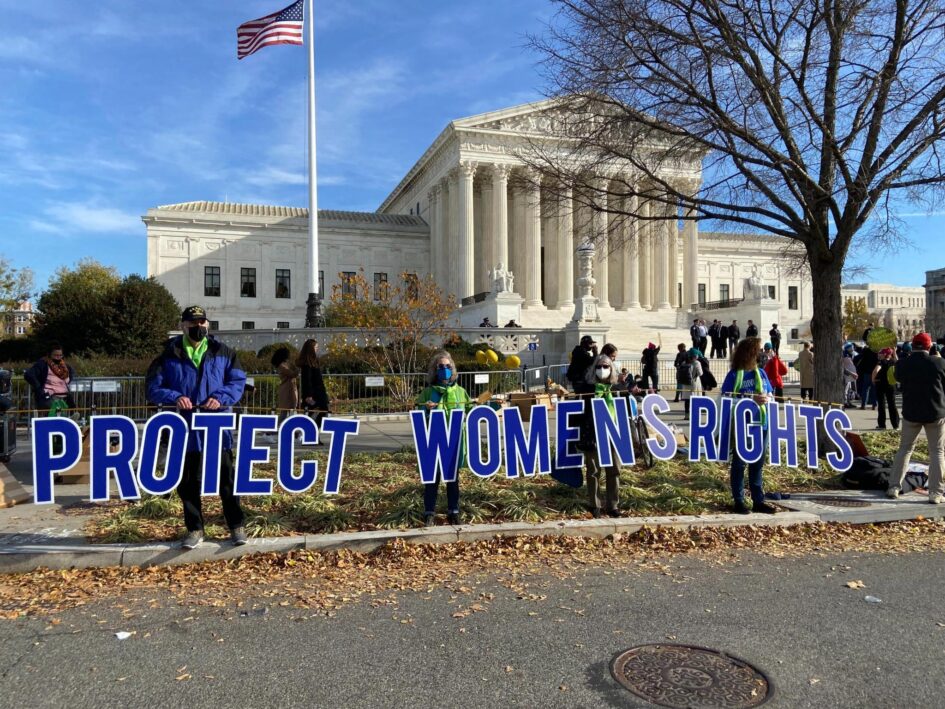 On Dec. 1, the U.S. Supreme Court heard oral arguments in Mississippi case Dobbs v. Jackson Women’s Health Organization to evaluate whether state laws that ban pre-viability abortions are unconstitutional. The Supreme Court’s agreement to review the Mississippi 15 week abortion ban unquestionably threatens nearly 50 years of Supreme Court precedent and is a test case to overturn Roe v. Wade. Around the U.S., advocates for reproductive justice rallied in cities large and small in support of the fundamental right to abortion care; Liberation News was there.

In Washington, D.C., two rallies one right after another converged outside the U.S. Supreme Court on to demand that women be able to control their own bodies, futures, and lives–including access to safe, affordable abortion healthcare. Hundreds of supporters throughout the day came to support women’s rights, hearing from many inspiring speakers who had benefited from abortion care. The message was clear: women are fighting back and will not sit back as a political body of unelected and unaccountable life-term political figures discuss their basic rights and needs.

The Bay Area branch of the PSL held a speakout in the heart of downtown San Francisco, on the evening of December 1. With workers commuting home, running errands, and holiday shoppers stopping to listen and support, speakers connected the dots from the struggle to defend abortion to the overarching system of capitalism that neglects and exploits women. Nathalie Hrizi, Vice President of Substitutes for United Educators of San Francisco, and national editor of Breaking the Chains Magazine, shared her experience of being a mother and a worker: “I am well aware that every time I got pregnant, there was no sustainable support… when we’re pregnant, when we give birth, and when we try to care for our children.” PSL organizer, Binx Ramos, explained the history of women’s oppression, and urged that we must do away with capitalism: “My comrades and I stand up for gender liberation, but liberation cannot and will not ever happen under this economic system of capitalism… It is not a dream to imagine women’s emancipation and queer emancipation — it is a reality, today. Women hold up half the sky!”

Members of PSL San Diego, Peace & Freedom Party SD, Sunrise Movement SD, SD Socialist Alternative, Armadillos Search & Rescue and SD Leonard Peltier Defense Committee and other community members gathered in front of the San Diego “Hall of Justice” to demand protections for abortion rights. Many passersby stopped to hear a speech from PSL member Tori Barron, who works full time at Planned Parenthood. She spoke about not only the need to defend Roe, but also the right-wing attacks that workers and doctors face for performing safe and legal abortions. “Let me be clear,” Barron said, “these people who are pushing lawmakers to challenge safe and legal abortions are not pro-life. They are pro-forced birth, pro-forced pregnancy, and pro-control.” Cars honked in support as they drove past the rally, and even young lawyers leaving the courthouse stopped to chant along with the crowd.

About 30 people gathered at the New York County Courthouse in Manhattan at 5 p.m. for a rally organized by the Party for Socialism and Liberation to legalize abortion once and for all. Speakers connected the system’s attacks on reproductive health care to the Ghislaine Maxwell trial taking place just steps away at the U.S. Court of Appeals for the Second District  —  both demonstrating that the ruling class, Democrat and Republican alike, is entrenched in perpetuating women’s exploitation. While the militant agitation went on, organizers also petitioned for the Women’s Health Protection Act, explaining to passersby the importance of passing this act in order to protect to right to abortion access for women across the country.

In New Hampshire in the morning of Dec. 1, some 200 people gathered at the State House in Concord, organized by Planned Parenthood NH Action Fund and co-ponsored by Kent Street Coalition, National Association of Social Workers – NH, Granite State Progress. State Rep. Maria Perez told Liberation: “I’m here because abortion is something that is affecting all of us, especially victims [of sexual assult]… And I’m here to speak up for those who don’t have a voice or whose voices have been shut down. Abortion should be our right… we should be able to decide what’s happening to our bodies. I’m here to let Governor Sununu know that his decision should be for us and not just for him, or whatever’s convenient for his political campaign. He should be thinking about a woman’s right to choose…”

Roe v. Wade,” while RFF — the state’s only abortion fund  — held a banner with a QR code to collect donations to fund abortion access.

On the nationwide day of action to defend abortion, about 20 people rallied outside the busy Ruggles train station in Boston in 30 degree weather. Speakers from Boston DSA, Public Higher Education Network of Massachusetts and Boston PSL spoke to the crowd as people on their evening commutes stopped to listen. Organizer Kim from the Party for Socialism and Liberation highlighted in her speech, “The lesson we must carry with us today is that it’s not the act of an enlightened politician or progressive stench in the air that brought about Roe or but that ALL change comes from struggle. So I invite all of you here to continue to join us in this struggle, to stay connected and organized because the fight has never stopped.”

At the Hamilton County Courthouse in Cincinnati at 12 pm, local organizers and activists attended a speak out organized by Planned Parenthood. Attendees shared their personal experiences with abortion, and why abortion access is necessary healthcare. NARAL, Equality Ohio, United We Stand Cincinnati, and the Party for Socialism and Liberation were all in attendance.

In Seattle, protesters with Radical Women and Party for Socialism and Liberation rallied outside the Federal Courthouse in downtown at 7 am, while across the state in Pasco, Washington, the PSL and the Womxn’s March gathered after the sun had set to make their position clear.

At the Hamilton County Courthouse in Cincinnati at 12 pm, local organizers and activists attended a speak out organized by Planned Parenthood. Attendees shared their personal experiences with abortion, and why abortion access is necessary healthcare. NARAL, Equality Ohio, United We Stand Cincinnati, and the Party for Socialism and Liberation were all in attendance.

In Jackson, Mississippi the organizations SHERO Mississippi, Mississippi Abortion Access Coalition, Planned Parenthood Southeast, Immigrant Alliance for Justice and Equity and Mississippi in Action held a rally in support of abortion access and against the overturn of Roe v. Wade. The rally was attended by more than 100 people, among them activists from Texas, Louisiana, and Alabama.

A few counter-protesters tried and failed to get the attention of attendees, who blocked their hatred out with chants and signs. Speakers spoke of how abortion access is an issue for workers and people of color in particular. Lakeesha Harris, with LA Storyteller in  Louisiana said, “It’s a workers’ rights issue in a time of a pandemic where most workers are having a hard time finding resources that’s adequate to sustain life: rent, food, diapers, everything that costs money, including abortion access.”

Mississippi is one of 11 states that opted out of medicaid expansion under the Affordable Care Act, it is these same legislators that are proposing an effective ban on abortion. Darius Nelson, a Jackson resident attending the rally commented on this hypocrisy saying, “Why is abortion murder, but no access to healthcare is not more murder? We are concerned about fetuses, but you are not actually concerned about human beings on this earth.”

Kayla Roberts with the Mississippi Reproductive Freedom Fund said, “When I say abortion is healthcare, it goes back to when women are getting raped, women are not physically able to hold a child. That’s when I say healthcare because this is things I feel like the government should pay for. Everybody is talking about healthcare like it pays for the stuff you need: your medicine, your surgeries. What is abortion? A surgery and healthcare.”

Abortion access is particularly scarce in rural Mississippi, where distance from the state’s only clinic and social stigma are huge factors. Lorena Quiroz, an organizer with the Immigrant Alliance for Justice and Equity, told the story of an indigenous immigrant woman from rural Mississippi who had to deal with the lack of access in the state and why it inspires her to fight:

“I’m here because she did not have access to abortion

We’re here to fight for the right to choose

We’re here for the right for safe abortions

We’re here to fight, and we’re not gonna back down

We’re not gonna stop resistance until we have safe abortions for all!”