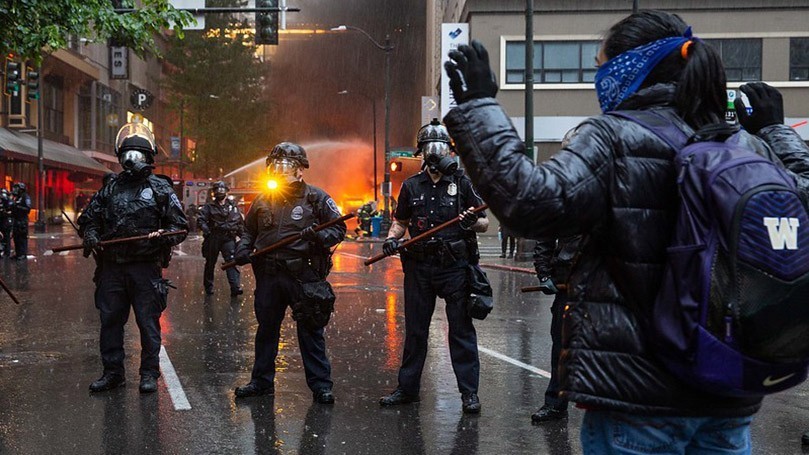 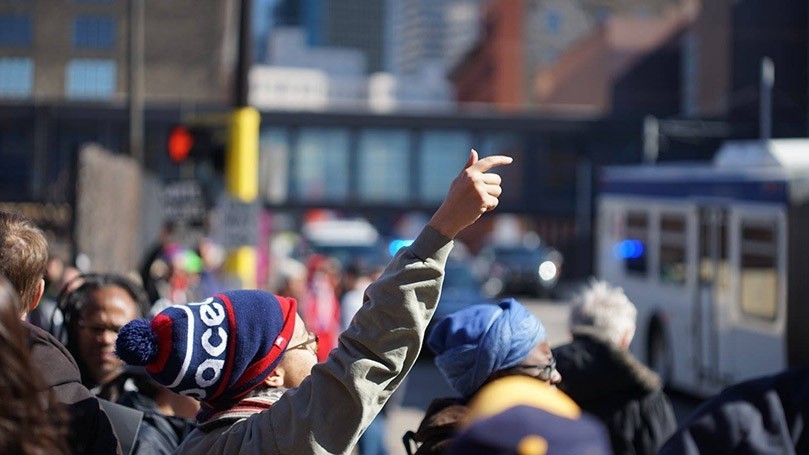 The following remarks were given at the People’s World African American History Month event in Connecticut in Feb. 2022.

Thank you for inviting me to join you today. My name is Eric Brooks, Co-Chair of the African American Equality Commission of the Communist Party USA, along with comrade Zenobia Thompson. I am honored to participate in the 48th People’s World African American History Month Event: Teaching Black History — Making Good Trouble. Special thanks to the organizers, and to Joelle Fishman, for all you do.

Art Perlo is in my thoughts, as in those of many of us here today. Art Perlo, !Presente!

There were over 1,100 people killed by police in 2021, a disproportionate number of them Black, many unarmed, some sleeping in their beds.

The African American Equality Commission is working with the National Alliance Against Racist and Political Repression and other organizations to enact community control of the police boards where possible across the United States. We are also fighting for voting rights, especially for full participation of the Black community in U.S. democratic processes.

In this context, I want to address two questions, from the perspective of young people developing themselves as leaders in the struggles around these social problems, and in particular that of ending systemic racist police violence.

The attack on teaching Black history is designed to disappear the experience of oppression and super exploitation that characterizes U.S. history from the beginning of the colonial and chattel slave experience until today. It continues the erasure of the history of indigenous peoples, which was reduced in U.S. education, and films and TV, to a series of pleasant Thanksgiving fantasies and false cowboy narratives, while attempting to disregard the complex human lives of the millions of indigenous people killed in the U.S. genocide against them. 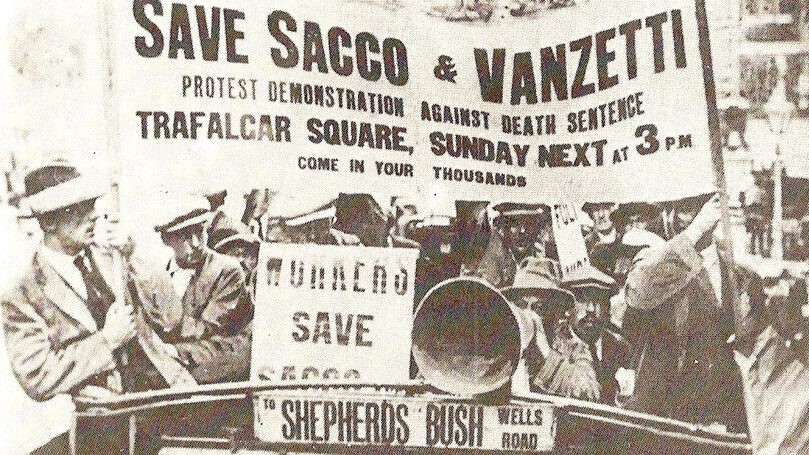 The lives of migrant European workers arriving in the United States were similarly denuded of both their history and justice, such as when Nicola Sacco and Bartolomeo Vanzetti were executed for a crime they did not commit in 1927. While Albert Einstein, John Dos Passos, Powers Hapgood, George Bernard Shaw, H. G. Wells, and the American Federation of Labor were joined by large worldwide protests demanding clemency and their release, Sacco and Vanzetti were executed, and their struggle for justice is not taught, beyond a passing mention at best, in U.S. educational materials.

Teaching Black history, championed today under the title of critical race theory, is attacked in a right-wing American Enterprise Institute op-ed by Max Eden, who quotes Sherry, an African American mother, as saying, “Black kids are turning against white people of all ages. . . .  And white kids are hating their parents and their success and their heritage and calling them racist.”

Eden also points out that “seventeen states have introduced, and seven have passed, laws or regulations colloquially termed ‘CRT bans.’”

This ugly distortion, making use of confused Black people, attempts to undermine the just and healthy revulsion by Black and white youth of ongoing racist murders by the police, which erupted so forcefully and positively in protests in response to the murder of George Floyd in Minneapolis in 2020. To claim that “Black kids are turning against white people of all ages” attempts to isolate the just actions of these youth against systemic racism and racist police violence. By separating individual action from mass united action, historical context, and from the systemic forces promoting racism and violence, Max Eden is pretending that all of life is individual rather than social. For him, knowledge of the historical genesis and current challenges of systemic racism is destructive to the harmony of life in our society rather than necessary if those issues are to be resolved. 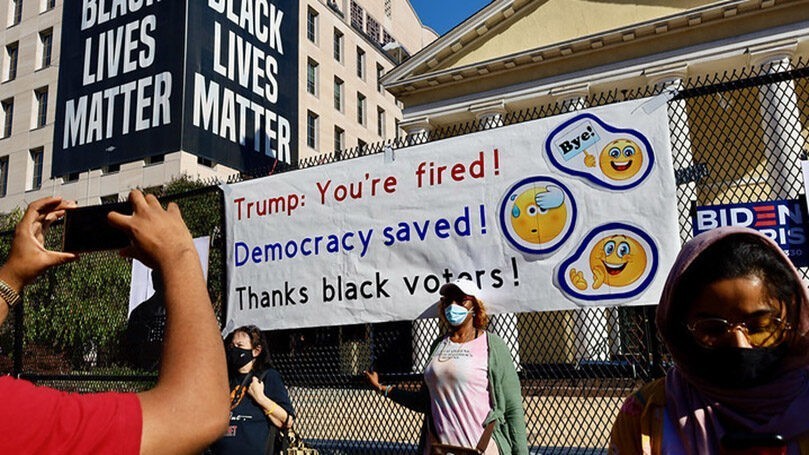 There is a fundamental, anti-democratic dimension to the attempted erasure of Black, indigenous, migrant, and labor history in the United States. By distorting Black history, the well-funded right-wing forces represented by the American Enterprise Institute and others endeavor to make Black people illegitimate participants in U.S. democracy. Trump, in his claims of fake votes in the 2020 elections, focused his criticism on cities with majority or largely Black populations as the centers of fake voting, unjustly demonizing Black voters. The attack on Black participation in U.S. democracy is a response to the consistent commitment of Black voters to progressive movement forward in a society where systemic racism is a daily impediment to Black people living healthy, happy lives.

Youth, and all people, need to understand how our society arrived at the struggles we face together today if they are to develop meaningful struggles to fix the issues facing us all.

What does making good trouble mean to you in terms of building a movement that can empower our communities and win change?

Capitalist culture always focuses on the individual, isolating people so they are more easily oppressed and exploited. However, the rich, the bosses, the capitalists are highly organized in their use of state power like the police or national guard, to achieve their goals, In response to the protests against the George Floyd murder, Minneapolis Police came out in battle gear to control the mostly peaceful protesters. But the protesters were doing “Good trouble,” joining together to demand social change to end racist police violence and win justice. 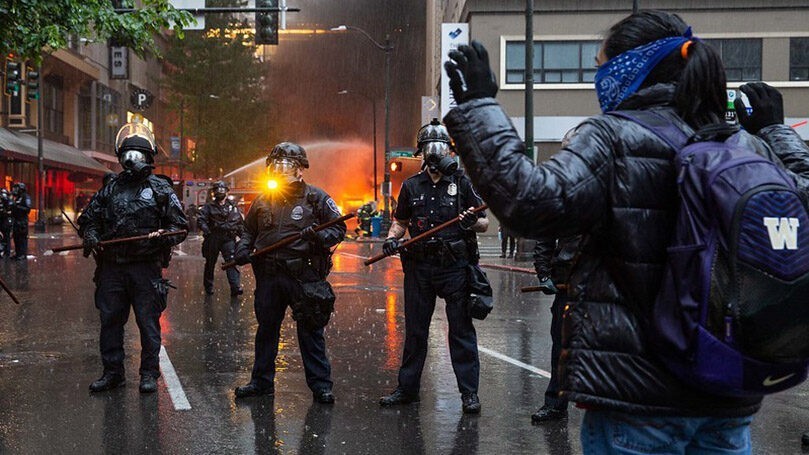 Problems of the scale facing youth today cannot be resolved by isolated, individual action. It takes united, democratic, anti-racist “good trouble” that organizes masses of people into coalitions, with the leadership of workers and oppressed people, and women, that can shape real solutions and win the systemic changes demanded if the people of the United States are to make positive, lasting contribution.

I want to personally encourage young people to learn history, anthropology, and languages. It is important to understand that our economy and our culture are social constructs that can be changed through mass action. It is important to understand the vast variety in human cultures as well as the underlying consistency that unites us as humans striving to have a safe home, food, and education. Studying Black, labor, and people’s history is as important to working and young people interested in forging a new society as is the STEM curriculum for getting a job. They are vital to having an adequate context to build the united struggle, including all workers locally and globally, all people seeking to end racism, and for peace, justice, and economic equity, into a united force for fundamental, revolutionary, and systemic social change in the United States, and to participate in the global movement for socialism.

A great place to develop one’s theoretical and historical understanding of the mechanisms for social change and ways we can all contribute positively to that change is through membership in the Communist Party USA and the Young Communist League. The Party has learned a lot through over 100 years of struggle against systemic racism and for decent lives with dignity for all working people.

To end, I recommend Bea Lumpkin’s February 23, 2022, article in People’s World, “The Power of Black History.” in which the more than 100-year-old fighter for socialism and against racism wrote:

Black History has the power to uncover the truth and expose the lies about the key contributions Black people have made to winning democratic rights for all. This is especially true of the Civil War and Reconstruction. That was a crucial time in American history that has been “falsified,” as W. E. B. Du Bois said. In his 1935 groundbreaking book, Black Reconstruction, Du Bois sets the record straight. The North “had to call in the black men to save the Union, abolish slavery, and establish democracy.”

In the end, the attempt to erase Black history is a struggle to undermine the democratic voice of Black people in U.S. society, and to advance the agenda of the extreme right and those who are threatened by the possibility of a society that meets the needs of the people. Let us all join in demanding that Black history be fully and realistically taught, let us all make efforts to teach ourselves, and most of all, engage in collective struggle around the pressing issues facing us as humans, Black, white, indigenous, migrant, Asian, and all other oppressed peoples today.

Working people and youth, and all people who stand for justice and progress, are invited to join the Communist Party USA to engage in the struggle for democracy and worker power, and for socialism.

Trouble in the EU: is Polexit looming?

Boris is in trouble. But what can ‘partygate’ tell workers about the nature of capitalist Britain?

Moving the Bar: Michael Ratner, Social Justice, and a Life Defending the Revolution

Black History and the ongoing struggle for liberation