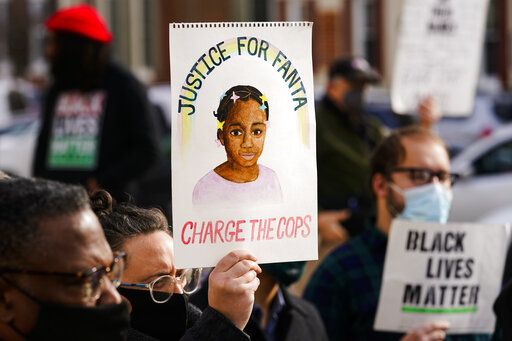 Fanta was murdered outside the Academy Park High School, after police randomly fired over 25 shots at a moving vehicle driven by a 19-year-old woman. Police falsely claimed the car had been involved in a drive-by shooting. The driver and a passenger were injured by broken glass resulting from the bullets. Twelve seconds later, the officers began firing indiscriminately into the crowd leaving a football game, killing Fanta and wounding her sister and two others.

Community outrage over the murder was exacerbated when Delaware County District Attorney Jack Stollsteimer charged two local youths, Hasein Strand and Angelo “AJ” Ford, with first degree murder in December. The two were not on the scene when the police opened fire.

In addition to charging the three officers, prosecutors withdrew trumped-up murder charges against the teenagers, who Stollsteimer had tried to scapegoat in his brazen attempt to shield Sharon Hill police. The Sharon Hill Borough Council will vote on dismissing the officers from the police department. Five Philadelphia City Council members called Stollsteimer’s handling of the case a “miscarriage of justice.”

The families of Fanta and the two youths, local community members and groups including Black Lives Matter, Delco Resists and UDTJ (which stands for the Upper Darby group’s core principles: Understanding, Devotion, Take action, Justice) have held multiple rallies, marches and press conferences calling for murder charges against Strand and Ford to be dropped and for release of the names of the officers. (workers.org/2021/12/60701/)

At a Jan. 13 rally in front of the Media Courthouse, demonstrators kept up the pressure on Stollsteimer, calling again for the names of the officers and charges to be filed against them.

In response to pressure from the community and the Bility family, the Sharon Hill Borough Council voted unanimously to conduct an internal investigation of the police department policies and its training practices. In a statement, Bruce L. Castor, the lawyer representing the Bility family, said the family “seeks answers and damages for the tragic and unnecessary death . . . and the injury and trauma inflicted on others as a result of the misconduct of Sharon Hill Police officers.”

The developments of Jan. 18 are a critical step in the right direction, but activists and the Sharon Hill community will continue to speak out and hold elected officials’ feet to the fire until justice for Fanta is fully achieved.

We need our own party, a labor party

USA: the struggle of the workers’ movement against slavery and racism (Part 3)

USA: the struggle of the workers’ movement against slavery and racism, part 4