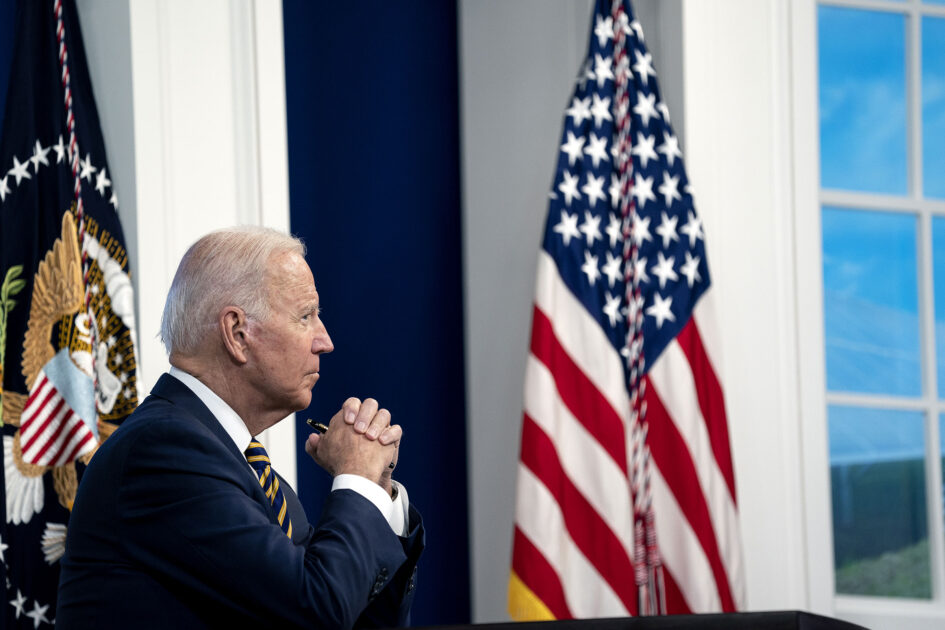 The walls are caving in around the “Build Back Better.” Biden has fumbled on his promises for a $15/hr minimum wage, voting rights, and police reform; fell devastatingly short of his vaccination targets as Delta overwhelmed the country; and weathered bitter humiliation in Afghanistan. The administration’s approval ratings are tanking to a new low, with a 53% majority of Americans now disapproving of Biden’s performance – including 62% of Iowans, surely setting off the DNC’s alarms for 2022.

Biden needs to push through the $1.5 billion bipartisan infrastructure plan, and the $3.5 trillion budget reconciliation bill or lose their last best chance to pull out a win before DC descends into the midterm carnival.

Actually, the timeline is even shorter than that. If Congress doesn’t fund the federal government and extend the federal debt deadline, they’ll have a government shutdown or a default on their hands, either of which could devastate millions of working people. It’s a four-track race to the finish.

At the time of writing, the entire Biden agenda is on the docket for Congress this week.

Biden’s “Build Back Better” plan consists of two key elements: infrastructure spending, and “human infrastructure” expansion of the safety net paid for by taxing the rich and corporations. The former, a bare minimum “roads and bridges” band-aid cobbled together with Republicans, passed the Senate and awaits a vote in the House. Meanwhile, the latter package in its original form contains a number of enormously popular measures, from universal pre-K, tuition-free community college, lower drug prices, and expanded Medicare eligibility with coverage for dental, hearing, and vision. With housing, home care, and significant although still inadequate climate spending included, the plan would be a real starting point in addressing key crises that have hit working people hardest over the last year, with a certain degree of credit for its contents being due to Bernie Sanders as chair of the Senate Budget Committee. Because Biden aims to pack these reforms into the budget reconciliation process, it can be passed in full with a simple majority in the Senate.

Yet despite this clear path forward, we are still seeing the package crumbling, and this time there’s no Republican majority to place the blame on. The Democrats themselves are tangled in a mess of standoffs and political maneuverings. To their credit, progressives in the House have so far held firm on their pledge not to support a bipartisan infrastructure bill unless it is brought to the floor alongside the broader reconciliation bill that will deliver concrete wins to working people. However, the critical flaw in their approach is the limited nature of their tactics. Rather than mobilizing ordinary people and making it politically unviable for any Democrat not to support this entire bill, they have limited themselves to only leveraging their votes. This is a recipe for bare-bones final product that does little to improve the lives of everyday Americans.

With Biden, Pelosi, and Schumer in the same camp as the political drivers of the reconciliation process, they are more than capable of getting the party in line behind both bills. They could lambast Manchin and the moderates in the media with the vitriol they usually reserve for the Squad. It’s literally Chuck Schumer’s job to get the Senate Democratic caucus in line.

What have we seen instead? The entire Democratic leadership has allowed moderates in the party to call the shots. This is not solely because they are weak and value parliamentary process over meeting the needs of ordinary people, but also because the leadership itself is bound to its twin tasks: appease big business, but still win reelection. The former requires backing down on promises to tax the rich and corporations, scaling back threats to the fossil fuel industry, and protecting big pharma from regulation. The latter, however, requires pretending to care about working people. In many ways, Manchin is a godsend to the establishment and that’s why Chuck Schumer considers him such a valued ally.

Democratic Agenda Gets Carved Up

Characteristic of American “democracy,” the process of passing these bills is designed to be as confusing as possible to ordinary people. Capitalist democracy is fundamentally designed to obstruct, and not facilitate, transformative change in the service of the working class. Over the next several weeks, the news is sure to be full of arcane parliamentary rules, political codes, and reports of who met with who behind closed doors in last-minute attempts to work out a deal. Although much will be blamed on the process, the crucial feature of the situation is the full-court press from corporate America pouring in millions to strip the bill down to scraps. The Koch-backed Americans for Prosperity, the U.S. Chamber of Commerce, and corporations like ExxonMobil, Pfizer, Disney, Apple, and Walmart are banding together to funnel millions into lobbying moderate Democrats to ditch key provisions in the Democratic agenda – and it’s working.

Centrist Democrats in the House, and key recipients of pharma money, have already succeeded in ditching the Biden promise to lower the costs of prescription drugs. Plans to tax the rich have been shrunken down so far that even the New York Times slammed the Democrats for aiming so low out of the gate, leaving generational wealth and non-income assets – where the richest of the rich get most of their wealth – relatively untouched. Democrats are even considering adding taxes on cigarettes and vaping products in blatant violation of Biden’s promise not to raise taxes on ordinary people.

Ultra-corporate Democratic Senators Joe Manchin and Kyrsten Sinema are digging in their heels against the $3.5 trillion plan. Manchin has taken every opportunity to appear on air and in op-eds vowing to stand in the way of its passage. He’s suggested it would need to be cut more than half to a mere $1.5 trillion to get his vote, and has even called for a “strategic pause” in negotiations until 2022. From the standpoint of big business, this would be strategic – the longer the process drags on, the weaker the bill.

With the party leadership slowly but surely bending to the moderate holdouts, the ball is in progressives’ court to take the lead in pushing for the full package. Bernie Sanders, AOC and the Squad have, by their own accounts, spent the Biden presidency banking their political capital, holding back from opportunities to impact critical issues in Congress in the interest of “picking their battles.” The $3.5 trillion budget would represent the largest increase in the social safety net since the 1960s, and would deliver meaningful relief to millions of working people. But the groundwork is being laid for a massive betrayal by the Democrats. Clearly, now is the time to put up a fight.

The main tactic of the House Progressive Caucus has been to withhold their votes on the bipartisan infrastructure bill as leverage until moderates agree to support the reconciliation bill. This is more than the caucus has done before, and in that sense it’s positive. However, pressure from the party leadership is already bearing down on them to back away from this limited tactic. If progressives don’t take a real stand against the party establishment, and mobilize ordinary people to fight, we could end up with all this effort wasted on a status quo bill, with lowered drug prices, community college, housing, or climate measures left behind. With the massive stakes involved, and the bulk of public opinion on their side, progressives should hold town halls of their supporters to discuss the importance of passing this legislation. These could be a jumping off point to organize their supporters in targeting conservative Democratic holdouts with marches and occupations. The goal should be to make it political suicide not to support the bill.

Unfortunately, even the most outspoken left Democrats are inspiring little confidence as they demonstrate increasing willingness to cave. AOC, an outspoken critic of the Israeli state’s violence against Palestinians, made a last-minute break with most of the Squad by switching her vote from no to “present” on a billion-dollar vote to fund Israel’s Iron Dome.

The most newsworthy thing AOC has done since Biden took office was her attendance at the Met Gala in a designer dress emblazoned with “Tax the Rich.” The irony of performing this stunt was lost on virtually no one. But more importantly, what good is sloganeering when two-thirds of Americans already support taxing the rich, and AOC is one of the most high-profile spokespeople for the party currently in power?

How Do We Win?

The situation reeks of deja vu. The last time the Democrats held the presidency and Congressional majority under Obama, resulted in the deeply flawed Affordable Care Act. In the end, Obamacare was marked by unnecessary concessions to Republicans and “Blue Dog” conservative Democrats, overwhelmingly favored corporate interests, and took years to roll out. This solidified the belief among significant sections of voters that the Democrats will talk a big game promising change to working people, then turn around and stab them in the back.

This historic failure all but directly resulted in the Tea Party seizing on public frustration to build support for carrying out ruthless attacks on social spending and public sector workers. If the Democrats once again put on a show of pretending to care then fumbling the ball on an even bigger set of promises, they’ll be handing the 2022 and likely the 2024 elections over to the increasingly radical-right GOP.

Working people are more dissatisfied than ever at staggering inequality. Bernie Sanders’ slogan that “billionaires should not exist” resonated with millions. The pandemic was even more eye-opening, where corporations raked in record profits and billionaires got 62% richer while millions lost jobs and nearly 700 thousand and counting have died of the virus. The people most desperate for change don’t want band-aids: they want to go after Jeff Bezos and Elon Musks of the world, and to defeat the pharmaceutical and fossil fuel industries. They support Congress acting on abortion rights, voting rights, trans rights, citizenship for millions of immigrants, and bold climate action. The lifeline COVID relief including pauses on debt payments, unemployment top-ups, and stimulus checks was a taste of economic security many had never experienced before and showed what the government was and is more than capable of providing to help keep people afloat.

Now is not the time to maintain the status quo, but when it comes to winning victories for the working class, we will have to wage the fight ourselves from below. Ultimately this entire crisis shows just how desperately working class people need to have our own political party that fights unapologetically and consistently for the things we need. Burrowing ourselves in a thoroughly corporate party is proving to be a completely failed strategy for the left who are soon to have nothing to show for their time in office. The left needs to take immediate steps to plan a jailbreak from the Democratic Party and launch an independent working class political force that could win an improvement in the quality of life of ordinary people and truly undercut the ascendance of an increasingly confident right wing.