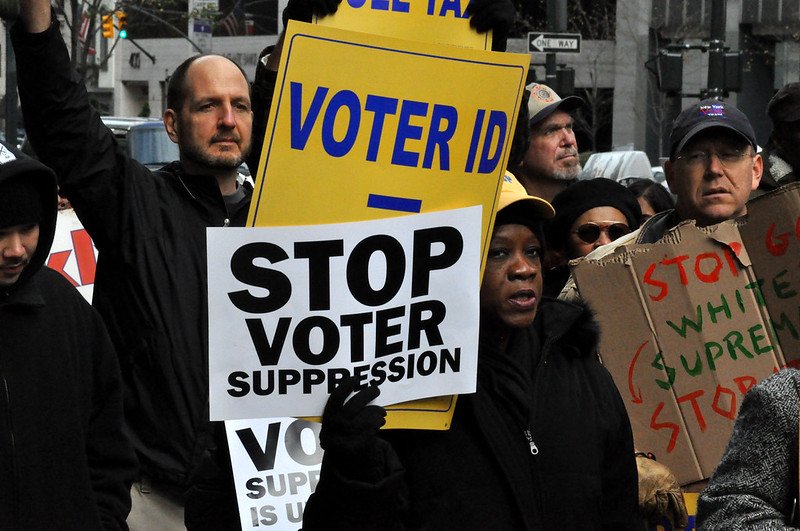 Despite President Biden’s stated commitment to passing major voting rights protections through the John Lewis Bill and the Freedom to Vote act, on Wednesday Democrats failed to make a modification to the Senate’s undemocratic 60-vote “filibuster” requirement due to opposition from Senators Krysten Sinema and Joe Manchin. That failure in turn led to the defeat of both bills, now packaged together, aimed at protecting voting rights.

Manchin and Sinema, both Democrats, claimed that their opposition to the proposed filibuster changes had to do with their desire to be bipartisan, to avoid “deepening divisions” and to “seek compromises” with Republicans and the right – the same people who have been enacting voter suppression legislation across the country, making it harder for Black people and poor people to vote.

While neither of the bills that failed to pass yesterday meet the full scope of what is needed, they would have worked to counteract much of the recent voter suppression legislation pushed at the state. The John Lewis bill would have restored and strengthened parts of the 1965 Voting Rights Bill that have been chipped away by more recent Supreme Court rulings. In particular, it focused on re-establishing the ability of the federal government to monitor and veto voting procedures in states with a history of racially discriminatory election practices.

The Freedom to Vote act had a number of initiatives that would have made it easier to vote. This includes making Election Day a federal holiday, increasing the types of identification that could be used when voting, allowing the use of ballot drop boxes across the board, removing restrictions around voting by mail, allowing water and food to be given to voters waiting in voting lines, and allowing those who have been convicted of felonies to vote once they are no longer incarcerated. Both of these bills were important pieces of legislation that would have had significant material impacts on voting access for poor and working class people, and especially people from oppressed communities that have long been targeted by racist disenfranchisement efforts.

Biden and Schumer have both voiced their “disappointment” with the failure to pass the change to the filibuster, and as a result the failure to pass the two voting rights bills. However, this failure is par for the course as the Democratic Party leadership fumbles virtually every piece of even marginally progressive legislation. When faced with opposition from the right wing of their party, they fold and give up. They end up either passing diminished and toothless versions of bills originally aimed at providing relief and protection for the working class, or, as in this case, they fail to pass anything at all.

Right-wing Democrats such as Manchin and Sinema have shown their true colors as enemies of progress time and time again as they have blocked bills aimed at addressing the climate crisis, increasing taxes on corporations and the hyper-wealthy to fund social programs, and extending the expansion of the child tax credit. Their most recent decision to prioritize “bipartisanship” over the defense of voting rights – all while the right wing works to make it harder and harder for Black people and poor people to vote – comes as no surprise.

And still, the rest of the Democrats in Congress and the White House have once again failed to fight against the far-right elements within their own party, and have proven unable and unwilling to take real action to meet the needs of the people. Rather than using their positions to put pressure on the right-wing democrats, Biden, Senate Majority Leader Chuck Schumer, and the rest of their party simply voiced empty support for the filibuster change, and then proceeded with a vote they knew stood no chance of succeeding.

Just as the actions of Manchin and Sinema come as no surprise, the Democrats allowing themselves to be held hostage by the most right-wing members of their party is far from a shock. It has been proven time and again that without mass pressure from the people, these patterns will continue – the Democrats will give in to the right-wing forces in their party, and will fail to pass even the smallest reforms.

But it is exactly this kind of mass movement that won the voting rights in the first place. At no point in U.S. history have establishment politicians magnanimously handed the right to vote to any oppressed group, having originally intended to restrict participation in elections to white men who owned property. Likewise, struggle can save voting rights in this moment of severe attack.

The fight for voting rights is essential