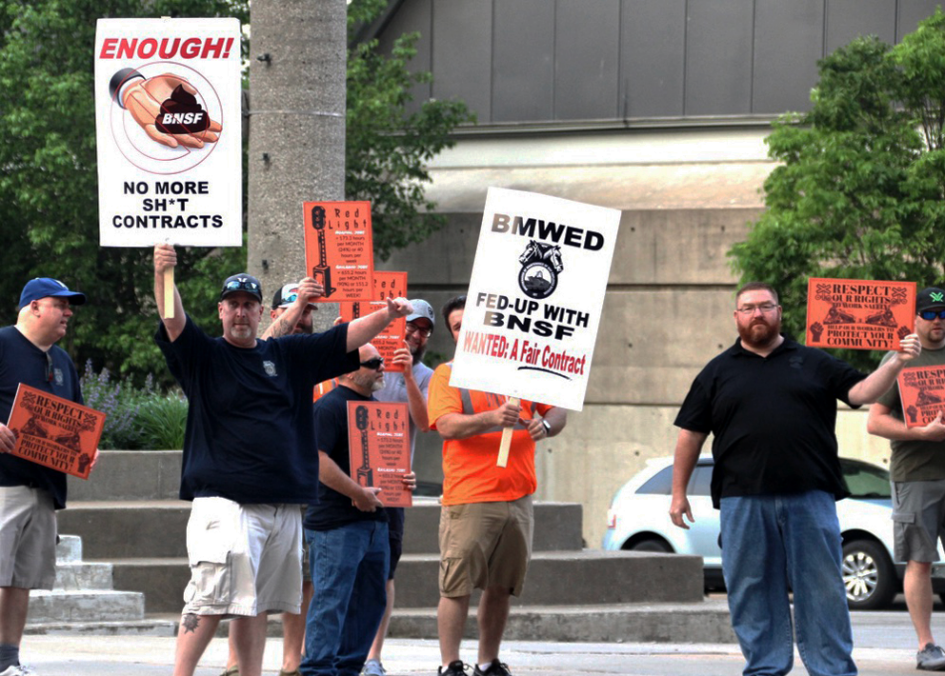 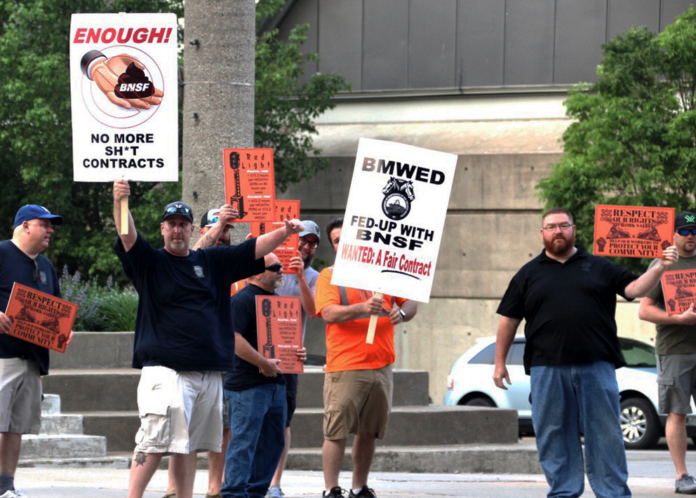 The U.S. House voted earlier today to crush a potential nationwide rail worker strike by imposing a contract, negotiated by the Biden administration, that had already been rejected by workers in four out of the twelve rail unions. The largest of these unions, SMART Transportation Division, represents 30% of freight rail workers.

“As a proud pro-labor President, I’m reluctant to override the ratification procedures and views of those who voted against the agreement,” Biden said in a tweet yesterday. “But in this case – where the economic impact of a shutdown would hurt millions – I believe Congress must use its powers to adopt this deal.”

Some progressives have until now praised Biden for presiding over the most “pro-labor” administration in decades. To state the obvious: if a President is “pro-labor” only in instances where the interests of the workers are not in conflict with those of the bosses, they were never pro-labor in the first place. Biden shedding crocodile tears over the non-railroad workers who he claims would be hurt by this action is a particularly nauseating attempt to pit workers against workers, while saying absolutely nothing to address the ruthless drive for profit of the corporate bosses who have created this crisis.

Anyone with illusions that the Democrats are the party of workers need look no further than today’s vote. This is an absolute betrayal of working-class people and makes clear as day the Democrats are not a party of working people. They are the party of the rail executives who paid themselves $200 million in the last three years. They represent the massive rail corporations who’ve skimped on staffing locomotives, putting both workers and the public at risk, in favor of doling out hundreds of billions in dividends and stock buybacks.

Rail workers have been in the process of negotiating amendments to their contract since 2019 and have rejected several rounds of Tentative Agreements (TAs). Chief among their demands is paid sick days – rail workers currently have no guaranteed sick days in the United States, and workers have been demanding 15 days in their contract. The Biden-negotiated TA includes one personal day, not even a sick day.

Workers are also fighting for broader quality-of-life improvements. A worker interviewed by Motherboard explained what drove the unions to vote by up to 96% margins in favor of going on strike earlier this year: “We’re only allowed three call offs over 90 days. We can’t call off on the day before or after rest days, scheduled personal leave days or vacation days. If you call off more than three times in 90 days you get a suspension of five days without pay. The discipline stays on your record for three years.”

The U.S. House voted 290-137 to impose the contract, followed by a 221-207 vote to amend it to include seven paid sick days. This is less than half the number of sick days demanded by workers but would still represent a win compared to the measly one-day offer in the Biden contract. However, this addition doesn’t face a straightforward vote in the Senate: if the sick day amendment fails to gain the requisite 60 votes to pass, rail workers will have the contract imposed on them as-is.

But even if the sick day amendment passes as a part of imposing the contract, the vote takes away the rail workers’ further right to negotiate, to vote on the final contract, and to strike if the contract is still insufficient. In other words, by voting to deny these workers the right to strike, Congress and the White House are denying them their fundamental right to refuse to work under the conditions being imposed by their bosses.

The Squad Betrays Workers – We Need A New Party

Despite publicly pledging solidarity to the rail workers, prominent members of the Squad and the House Progressive Caucus voted to impose the contract, including Alexandria Ocasio-Cortez, Jamaal Bowman, Cori Bush, Ro Khanna, and Ilhan Omar. That all but one of the House representatives endorsed by the Democratic Socialists of America voted to kill the strike is yet another sobering reminder of the end result of running left-wing candidates in the Democratic Party.

Self-described “democratic socialists” have not exerted left pressure on the Democrats – the opposite has happened, with members of the largest socialist organization in the U.S. now on record as having sided with the bosses in an unforgivable renunciation of the values they were elected to fight for. An organization whose members do this cannot be considered an organization fighting for working people. The path for labor and the left to win gains from maneuvering within the Democratic Party is, and has always been, nonexistent.

The left and labor movement should urgently begin constructing a new, working-class political party. The danger in not doing this is that reactionary right-wing can cynically pose as an alternative to the big business politics of the Democrats and Republicans. In fact, Marco Rubio has already vowed to vote against the deal, saying: “It is wrong for the Biden administration, which has failed to fight for workers, to ask Congress to impose a deal the workers themselves have rejected.” Josh Hawley has released a similar statement.

Rail union leaders are reporting that many of their members are enraged that their unions endorsed Biden in the 2020 election. They were sold a bill of goods by union leaders that Biden would be “the most pro-labor president,” and now, as a direct result of the actions of Biden and the Democrats, will have a rotten contract jammed down their throats. This is precisely why Socialist Alternative called on unions not to endorse Biden and instead to begin building a working-class political alternative to the Democrats.

We send our solidarity to rail workers in their fight to win a fair contract, and defend their right to strike against their parasitic bosses.

How to picket stores that sell your employer’s products

‘The billionaire variant’ — inequality kills one person every four seconds

Building a Labour Movement to Take on the Billionaire Class

Billionaire Wealth Up 50 Percent Since the Start of the Pandemic