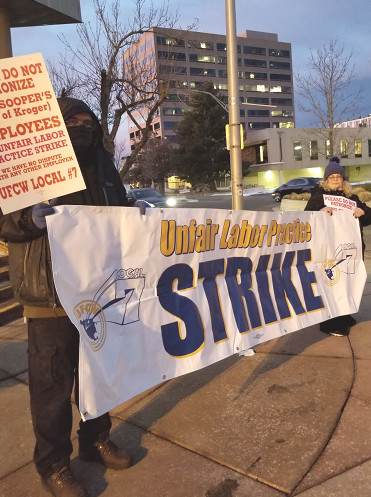 The workers of the largest supermarket chain in Colorado, KingSoopers went on strike at 5:00 a.m. Jan. 12. The strike involves 8,400 workers and 63 stores statewide. The last time the United Food and Commercial Workers (UFCW) members went on strike was 25 years ago in 1996.

Workers surrounded the store on Leetsdale Ave. in Denver in the dark and with freezing temperatures, as passing drivers honked loudly in support, and potential shoppers were turned away.

The company says the average wage is $18.29 an hour, but Eduardo, one of the strikers, says he only gets $12 an hour. Austin made $18 an hour, after 16 years at KingSoopers. Most workers make between $12 and $15 an hour, according to the strikers, with one making $19 an hour after 30 years. They said, “no one gets full time. Most workers are part time, and it takes years to apply for full time.”

Often hours are cut to save KingSoopers money. The Kroger-owned company wants to cut time-and-a-half pay to the legal requirement, after 40 hours in a workweek, instead of after the eight hours in a day in the current contract. This forces workers to put in up to 15 consecutive hours at straight-time pay. Yet they are offering scabs (“replacement workers”) $18 an hour.

Last year sales jumped 11%, and the company made $4 billion in profit and used a billion for stock buybacks — not to improve the lives of workers.

Adrian says she has a two-year-old at home and, like all the others, worries about her safety because of the pandemic. Many workers have gotten sick, and some have died. She stated shoppers do not always wear masks and sometimes deliberately cough in her face. Yet the company wants to cut sick pay to 48 hours in a year. “They want to give [executives] bonuses but make us pay more of our health care costs and reduce the company share.”

Another worker said they want to cut some holidays.

They are “essential workers,” who have come in to work all through the pandemic for two years. They received a $2 an hour bonus for hazard pay, which lasted only a couple of months.

Kim Cordova, president of UFCW Local 7, has accused KingSoopers of unfair labor practices and a pay structure that pays workers hired after 2005 lower wages. She said workers on the Western Slope of Colorado are paid even less than in Denver. According to Cordova, “the company still hasn’t given the union information on wages, bonuses, pensions and other items that it needs to evaluate the latest proposal.” (Denver Post, Jan. 12)