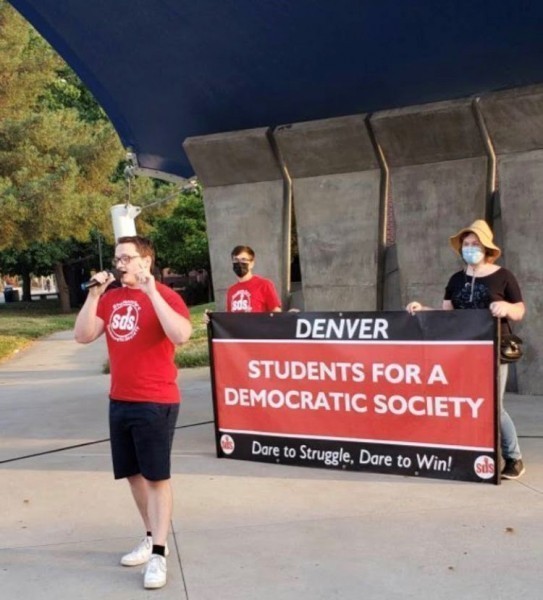 A member of SDS Denver speaks about the power people have when they join together.
(Fight Back! News/staff)

Denver, CO – About 50 students and campus community members gathered at Tivoli Commons for the Students for a Democratic Society (SDS) National Day of Action: “Cops Off Campus, Black Lives Matter!” Demands included the disarmament and defunding of Auraria Campus Police Department (ACPD) and more information regarding their participation in the Federal 1033 Program. Members of SDS and Freedom Road Socialist Organization gave speeches about strategies for community control of police and recounted stories of police violence, all while leading chants of “Down with mass incarceration, up, up with education!” and “Black lives matter!”

“No one is gonna do it for us, we have to continue to show up and say enough is enough. We don’t want a $4 million police department. We don’t want the same officers who were gassing us and beating us in the streets last summer to be policing our campus. We want our tuition dollars to go towards benefitting students, not a bloated, militarized police force,” says Shaine Carroll-Frey, SDS treasurer.

This National Day of Action comes on the heels of the recent indictment in the police murder case of Elijah McClain, a 23-year-old Black youth who was killed by Aurora PD and paramedics in September 2019. Aurora Police officers Randy Roedema and Nathan Woodyard, former officer Jason Rosenblatt, and Aurora Fire Rescue paramedics Jeremy Cooper and Peter Cichuniec were each indicted for manslaughter and criminally negligent homicide. The 32-count indictment also included an additional charge of assault and one count of crime of violence against Roedema and Rosenblatt, as well as three counts of crime of violence and six counts of assault levied against Cooper and Chicuniec. Aurora Police used a chokehold to restrain McClain and directed paramedics to use ketamine to subdue him.

The indictment comes almost two years after the incident occurred – between protests in the wake of Elijah McClain in 2019 and the George Floyd Uprising in 2020, public outcry and militant organizing helped bring about this indictment.

While ACPD has an annual budget of $4.3 million, there is little to no transparency as to how these funds are being utilized. While it is publicly known that ACPD participates in the 1033 Program, the extent of their participation has been kept vague. The 1033 Program is a product of the “National Defense Authorization Act of 1990” and authorizes the transfer of excess military equipment to police departments, sheriff’s offices, and other civilian law enforcement agencies. After student attempts to gain this information via the Colorado Open Records Act, the request was deemed “contrary to public interests” to tell the public what firearms and other weapons the campus police possess. Given that police murder innocent people across the country, it begs the question what these “public interests” are.

SDS member Katherine Draken said in her speech, “The police don’t serve us – they serve the rich and their politicians. Police don’t protect the people – they protect the status quo of white supremacy and oppression of the working class. We need to continue organizing for community control of the police so we can change this corrupt system.”

Students for a Democratic Society says they will continue to organize and mobilize the campus community until their demands for community control of ACPD have been met.