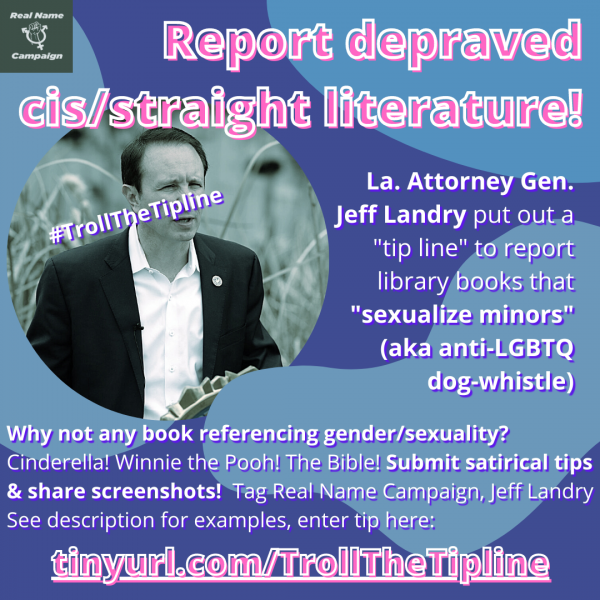 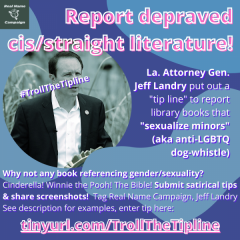 Landry was calling on concerned citizens to report books with LGBTQ-related themes. Landry claimed in a Times Picayune op-ed that these books provoke “increasingly violent and criminal sexual desires.”

The most hardcore Landry supporters ask: Why stop there? LGBTQ sexual orientations, genders and relationships are only the tip of the iceberg! The attorney general should crack down on all sexualities and gender identities in books.

Disney Princesses? Shakespeare? The Bible? Little “Miss” Muffet? None are off the hook! They propagate heterosexuality and cisgender ideologies just as flagrantly as LGBTQ-themed literature. In fact, they are much worse.

Real Name Campaign, an organization of activists based in New Orleans, encourages the most consistent followers of the attorney general to submit tips. The group created a Tiny URL to make the tip line more accessible: www.tinyurl.com/TrollTheTipline

Louisianans who send in tips should take screenshots of their tips and share them on social media, tagging AG Jeff Landry and Real Name Campaign NOLA.

Tips are already rolling through, under #TrollTheTipline.

One concerned resident writes: “Found a book at my library titled James and the Giant Peach. Didn’t read it, assuming the worst.”

Another added: “My second grade daughter brought home the book Matilda. Nothing inherently sexual about it, but every lesbian I know had/has a crush on Miss Honey. So that’s suspicious.”

Landry plans to run for governor in 2023. After dutifully enforcing the state’s no-exceptions abortion ban, he’s using this tip line to rally his base. Given the groundswell of enthusiasm, submissions may be so numerous that they make the tip line obsolete.

[Editor’s note: The vast majority of readers will realize the above is satire but given life and culture in a declining imperial power, we are stating the obvious just to be sure.]

Empty Gestures or Substantive Change? On the Nobel Prize in Literature and Its Discontents

Save libraries, save the world

Sometimes it takes an theoretical opponent to keep the record straight…

The COVID crisis is straight out class war

The Enlightenment Sets the Record Straight