Despite the blockade/ Cuba’s health care system is extraordinary 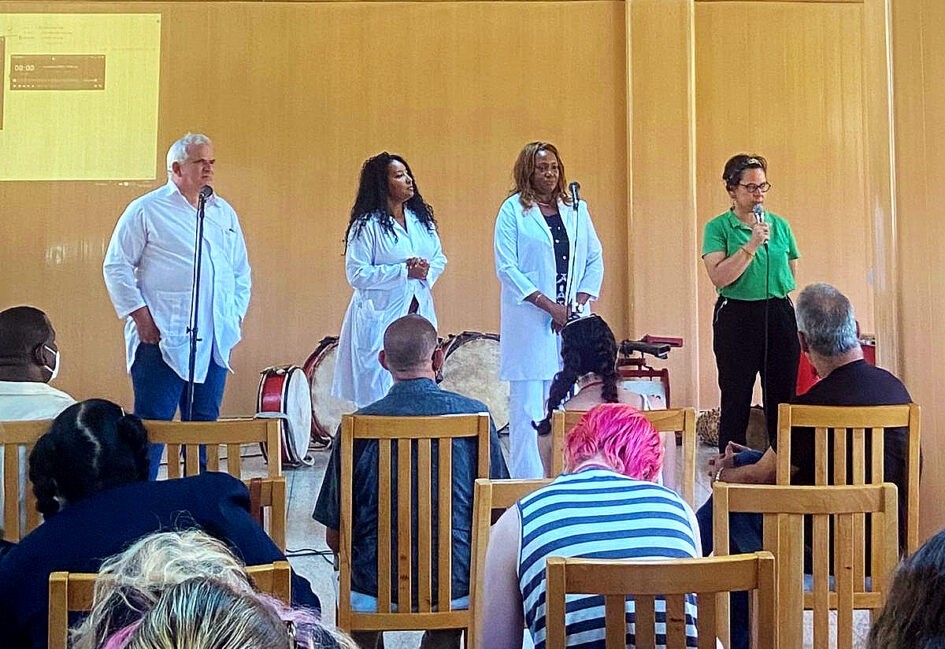 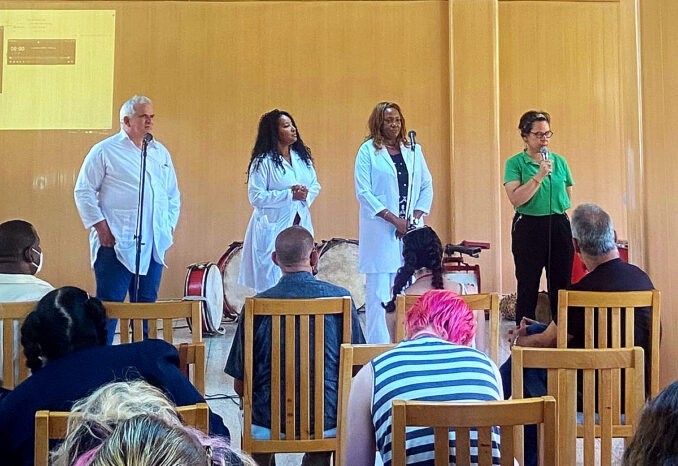 The brigade of more than 70 people from around the U.S. visited Laboratorios Farmacéuticos Oriente in the city of Santiago de Cuba, the main city of Cuba’s east. The laboratory forms part of Cuba’s extraordinary scientific medical organization.

Scientists in the laboratory have developed three vaccines that are 92.83% effective in preventing death and the more severe symptoms of COVID-19. They created three boosters that are compatible with Pfizer and Moderna (messenger RNA or mRNA) vaccines. Cuba was the first country to develop a vaccine for children from 3-11 years old.

When the Venceremos Brigade delegation entered the laboratory facility, a room full of heroes — Cuban nurses and health care workers — stood and applauded. One woman held her hands to her heart and reached out to us, as if we were the heroes.

Cubans acknowledged the work of young people in developing the vaccines. At the height of COVID-19 in Cuba, young medical students did contact tracing house-by-house, searching for those with symptoms. They educated people about the importance of wearing masks and washing hands.

Cubans support the isolation centers, which house people in quarantine. And many medical students were among the 44,000 Cubans who volunteered for clinical trials during production of Cuba’s vaccines.

The Laboratorios Farmacéuticos Oriente is conducting multiple lines of research. The blockade caused shortages of saline solutions necessary for intravenous (IV) drips for dehydrated patients and the delivery of drugs. Cuba has now developed their own saline solutions, which have saved lives all over the world.

The Cuban vaccines can easily be exported, because they are stable at temperatures above 30 C (86 F). Eight countries are already using them, and others are evaluating them.

According to a Jan. 5 article in Granma (English), “The Abdala and Soberana vaccines use the RBD antigen, that is, the spike (S) protein region, which binds to the virus receptor in the cell,” and this helps the body produce antibodies that act against different variants of the virus. “Several groups of scientists around the world and over 20 scientific journals have published papers supporting this hypothesis.” (tinyurl.com/rktbbd3k)

Cuba has developed IV solutions and equipment that make it possible for people to administer their own intravenous treatment at home. Cuban science produces products for hemodialysis for kidney failure. Cubans 100 miles away can receive regular free transportation to kidney centers, where they are also fed for the day. What would cost a person in the U.S. $200 is free for Cubans, even while all Cubans must struggle with the blockade.

Medical care is a right

There are no private hospitals in Cuba. Medical care is a fundamental right of Cuba’s citizens and is written into the Cuban constitution. Cuba’s medical system prioritizes nurses’ rights as workers and guarantees free health care for all Cubans.

The for-profit medical system in the U.S. has provoked nurses to strike to protest unsafe patient care, based on the low nurse-to-patient ratio. In situations where one nurse to four patients was standard, nurses may now have 10-20 patients. This shortage of nurses has caused patient deaths and increased stress on nurses, causing many to leave the profession and increase the overall shortage.

Speakers at the Cuban lab said that because of the blockade, Cubans have been forced to develop many types of medicines and plastic bandages, which were not otherwise available to them. They are able to get some medical supplies from Mexico, China and Italy, among other countries.

The speakers said the late Cuban revolutionary leader Fidel Castro had encouraged the development of a biotech, pharmaceutical industry that trained scientifically skilled doctors and researchers. This infrastructure allows Cuba to produce many of its own medical supplies.

Cuba has sent 53 brigades to other countries and has over 28,000 Cuban health care professionals residing in 58 nations. One speaker said that Washington wrongly accuses Cuba of producing bioweapons, but that the U.S. fails to mention all the people worldwide Cuba has been helping, including many in the United States. Cuba still offers vaccines to some people in the U.S. at low prices.

When asked about long COVID-19, the Cuban scientists said they are developing trials to measure the impact of the vaccine on frequency and duration of post COVID-19 symptoms. They said they send patients with long COVID-19 to specialists such as neurologists who work with them.

Cuba has a rich history of developing vaccines or medicines for diseases that have hit Cuba hard, such as  dengue, yellow fever, malaria, and other respiratory diseases.

Cubans are also working on creating natural-based products such as moringa leaves, which have 7 times more vitamin C than oranges and 15 times more potassium than bananas. These products are loaded with calcium, protein, iron and amino acids, which help build muscle and contain antioxidants which boost the immune system. Cubans feed moringa leaves to animals and also turn the leaves into medicine.

When Evelyn, a brigadista on our trip, got a headache, the Cuban doctor discussed with Evelyn how stress affects her body. She told Evelyn that the stress medication Evelyn was taking was bad for her and provided her with a healthier Cuban medication. When Evelyn offered her money, the Cuban doctor said, “Oh honey, not here.” If this was the U.S., Evelyn would have been handed a bill to pay — not free medication.

Arenstein worked for 40 years as a nurse, including 20 years as a diabetes educator before retiring. Neeley is a retired science teacher.

Extraordinary Teleconference of the IMCWP on December 10-12

Extraordinary Conference by the Communist Party of Turkey

Before the Vote: Cuba’s Report on the Impact of the Blockade