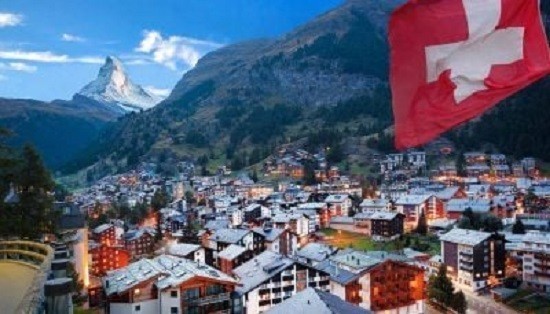 On Wednesday, October 20, I joined “Vrede Scheppen,” “Create Peace,” about 25 peace activists from the Netherlands, Germany and Austria at the airbase at Volkel, Netherlands, making a plea for an end to nuclear weapons. This base is home to two Dutch F16 fighter wings and the United States Air Force 703rd Munitions Support Squadron. In violation of international and Dutch law and part of a “sharing agreement,” the U.S. Air Force maintains 15-20 B61 nuclear bombs there and in violation of the same laws, the Dutch military stands ready for the order to deliver those bombs.

Besides our small multinational protest, on that same day the Dutch and U.S. militaries at Volkel were participating in another international collaboration, this one for a different purpose than ours, the annual NATO exercise “Steadfast Noon,” literally a rehearsal for the extinction of humanity.

As we gathered at a wayside near the base with F16 fighters roaring over us, a few of the local police watched from a distance. We greeted old and new friends, sang, prayed, shared food and distributed pink shovels and conspired to dig our way into the base, onto the runway and disrupt the practice. Hardly a clandestine plot, this “digging for peace” was organized openly and local authorities were informed. Our purpose was get into the base, “to advocate that the old nuclear bombs be removed and the CO2 emissions of the armed forces be counted in the climate targets and to protest against the arrival of new nuclear bombs,” but our expectation was to be stopped while trying.

As our shovels pierced the sod along the fence that was the first line of defense for some of the most deadly weapons on earth, we looked over our shoulders expecting any moment to have our good work interrupted by a warning, at least, if not by arrest. To our surprise, the police only passively looked on as we dug. Our apprehension turned to elation as it became clear that no one was going to stop us. We began to dig in earnest.

On the inside of the fence more police gathered along with a squad of soldiers but except for a carefully restrained dog snarling and pulling on a leash, none of them seemed upset by the scene they were witnessing. Our hole soon became a tunnel and it was not until eight of us, one at a time, crawled through under the fence and climbed up the other side that we were addressed by the authorities. A soldier spoke to me in Dutch and then in English, asking “do you understand that you are under arrest?”

Days before, home on our farm in Iowa, I had dug up our crop of sweet potatoes, enough to feed us through the winter and it was with similar satisfaction that I pulled myself out of the hole I had helped dig and approached the runway, so close to the bombs and the planes that could bring death to millions. At this time and place, nuclear destruction was not an abstraction, nor was our resistance to it. Coming up from that hole felt like coming up out of the grave.

“The Royal Netherlands Military Constabulary arrested eight people Wednesday afternoon when they entered unauthorized military grounds,” it was reported in the local news. “We already suspected that a number of people would try to get on the premises. They made a hole under the fence, and once at the airport we stopped them. They didn’t resist. It all went off peacefully,” said a police spokesperson.

The prosecutors interrogating us later seemed incredulous as we were that not one of the police or military ever warned that we might be trespassing or tried to stop us in the commission of what they interpreted as our crime. I was the only foreigner arrested along with seven others, ranging in age from their 20s to their 80s. Saved for last, I tried to redirect the questions asked by my interrogators about my previous involvement in such protest in other countries to the real crime, the B61 nuclear warheads that my government is hiding in plain sight in Volkel. I refused to answer questions about the several visas to Afghanistan in my passport, not fearful for myself, but recognizing at that moment the enormity of my privilege as a white man carrying a U.S. passport. After being shuttled for five hours or so between the base and the local police station, we were all released with a warning that criminal charges are pending.

After many such protests in many places, I never experienced so relaxed a response from the authorities as we were met with at Volkel. No one in uniform expressed anger or even mild impatience with us and our antics. At bases that house nuclear weapons in the Unites States, signs on the fences carry warnings of lethal force. Even touching such a fence can trigger an armed response. Break-ins like ours on October 20 when they happen in the U.S. almost always merit prosecution and sometimes years in prison. On several occasions, I have spent up to six months in U.S. prisons for even attempting to enter a military base through its public main gate with a petition.

Whether the level of security at a facility with nuclear weapons is as casual as it is at Volkel or the very highest, as at the fortress-like Y-12 facility at Oak Ridge, Tennessee, where in 2012, three Christian pacifists gained access to the world’s largest depot of plutonium, such actions prove that the concept of nuclear security is a myth. Far from keeping a nation secure, the weapons themselves need more protection than any nation can give them. There is no safety in nuclear weapons.

The context of our protest, “Steadfast Noon,” is explained in classical double-speak in a brief NATO press release on October 18: “The exercise is a routine, recurring training activity and it is not linked to any current world events,” but at the same time it cites the Allied Heads of State and Government, who at the NATO Summit in June, declared that “given the deteriorating security environment in Europe, a credible and united nuclear Alliance is essential.”

Along with the Netherlands, Belgium, Italy, Turkey, and Germany also have bases housing U.S. nuclear weapons under similar sharing agreements. These nuclear sharings are not agreements between the various civilian governments, but between the U.S. military and the militaries of those countries. Officially, these agreements are secrets kept even from the parliaments of the sharing states. These secrets are poorly kept, but the effect is that these five nations have nuclear bombs without the oversight or consent of their elected governments or their people. By foisting weapons of mass destructions on nations that don’t want them, the United States undermines the democracies of its own purported allies, just as its nuclear posture undermines democracy at home. Far from protecting the host countries from aggression, “given the deteriorating security environment in Europe,” the presence of U.S. nuclear weapons makes those bases potential targets for preemptive first strikes.

Along with the U.S., the five countries “sharing” U.S. nuclear bombs are signatories to the Nuclear Non-Proliferation Treaty. In addition to provisions that call for keeping nuclear weapons technology from spreading to other nations that all six governments violate, the United States also ignores Article VI of the treaty, which requires “all Parties undertake to pursue good-faith negotiations on effective measures relating to cessation of the nuclear arms race, to nuclear disarmament, and to general and complete disarmament.”

Far from making good faith measures for general and complete disarmament, the United States is pursuing a trillion dollar program of modernizing and “life extension” of its ageing nuclear arsenal. As a part of this program, the B61 free-fall bombs currently at Volkel and the other nuclear sharing bases in Europe are scheduled over the next months to be replaced with a new model, the B61-12, with steerable tail fins intended to make them much more precise and deployable. The new bombs also have a facility with which the explosive force can be set from 1 to 50 kilotons, more than three times the power of the bomb that destroyed Hiroshima in 1945.

More “deployable” is another way of saying more likely to be used, and with these new, more flexible weapons on hand, U.S. war planners are thinking up more ways to use them. In a June, 2019, report by the U.S. Joint Chiefs of Staff, “Nuclear Operations,” it is suggested that “using nuclear weapons could create conditions for decisive results and the restoration of strategic stability…Specifically, the use of a nuclear weapon will fundamentally change the scope of a battle and create conditions that affect how commanders will prevail in conflict.” If the doctrine of mutually assured destruction, the knowledge that the devastation wrought by a nuclear exchange would leave no winner, would be total and horrible beyond imagination is what helped prevent a nuclear war over the last decades, then the growing delusion among U.S. war planners that a nuclear war can be won puts the world at unprecedented peril.

NATO boasts of “Steadfast Noon,” betraying the arrogant conviction of the Allied Heads of State and Government that despite a “deteriorating security environment,” through annual displays of brute force and profligate waste of fossil fuel, the darkness can be held at bay forever and the exploiters of the earth and its people will bask in the everlasting light of noon. The scholars at The Bulletin of Atomic Scientists who have kept a “Doomsday Clock” since 1947, propose instead that the planet is actually closer to midnight, the hypothetical global catastrophe. The Bulletin’s Clock is now at 100 seconds before midnight and humanity is closer to its destruction than ever before, because “the dangerous rivalry and hostility among the superpowers increases the likelihood of nuclear blunder… Climate change just compounds the crisis.”

It was a pleasure and honor to dig with my European friends at Volkel in October, as it was to be at Buechel, the German nuclear sharing base in July. My first trip overseas was in 1983, joining with millions of Europeans in the streets protesting the deployment of Pershing II nuclear missiles, starting an insufficient but dramatic reduction of nuclear weapons that is tragically being reversed today. The new B61-12 bombs slated for Volkel and Buechel, like the B61s and Pershings, before them, are made and paid for in the United States and as U.S. citizens, we are responsible to be in solidarity with those in Europe who are resisting them.

I returned home to Iowa to find a letter waiting for me from the Kansas City Municipal Court, ordering me to appear on February 18th to answer to a charge of trespass last May at the National Security Campus there, where the nonnuclear parts of the new improved B61-12 bombs and the rest of the U.S. nuclear arsenal are produced. My conviction for cutting a fence at Buechel in 2019 is under appeal in a German court. I wait expectantly for a royal invitation to offer my defense to similar charges in the courts of the Netherlands. 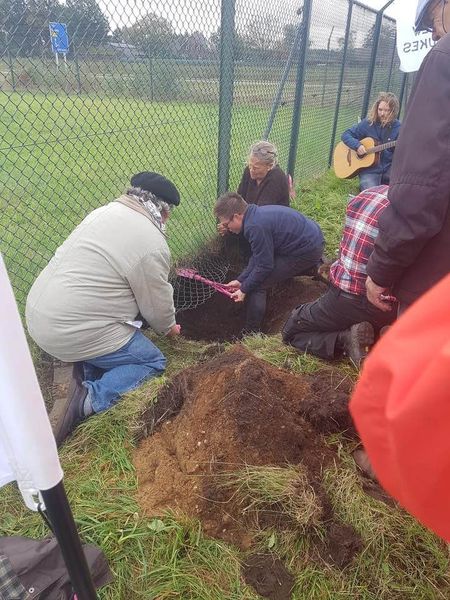 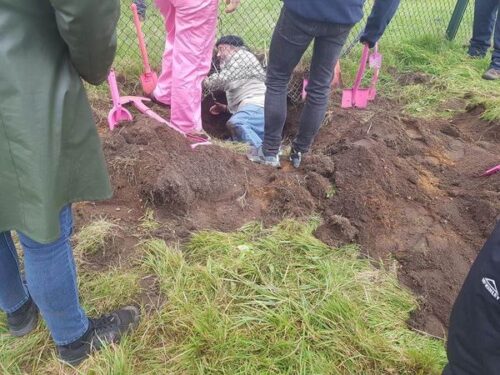 “At this time and place, nuclear destruction was not an abstraction, nor was our resistance to it”.  (Photo by Susan van der Hijden)

US ‘nuclear modernization’ plan is a handout to ‘Profiteers of Armageddon’