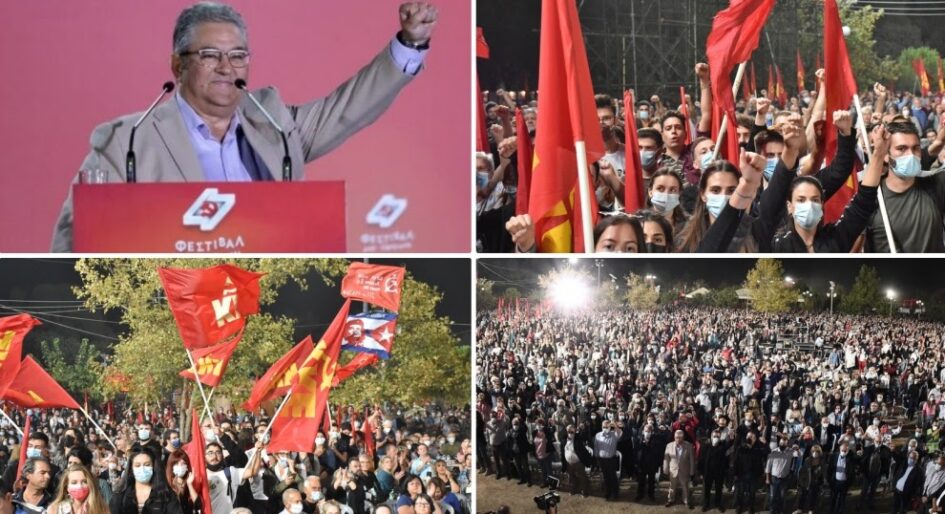 September 27, 2021 – From In Defense Of Communism
170 views
This year’s festival was marked by a record attendance, with thousands of people, workers, young men and women, from every part of the Greek capital participating in the major events.

“We are all here! Present! The KKE, KNE are here! We are here, determined to “turn the sun around”. To put into practice “the dream of all the hungry and wronged”. For “the bread, the light and the song of the whole world”, Dimitris Koutsoumbas underlined during his speech at the political event held during the last day of the 47th KNE-Odigitis festival in Athens.

Dimitris Koutsoumbas called the young people “to dare and deepen their challenge towards the state, the system and the parties that serve it, to dare to think about how we could and should live in the 21st century and who must be blamed for the fact that this doesn’t happen. To dare and leave behind doubts, prejudices and hesitations. To join KNE, the organization that advocates and fights for the most innovative, the most daring born by human thinking”.

The KKE General Secretary stressed out that “the current state is nothing but a mechanism of oppression, repression, exploitaton, perpetuation of justice. It is the state of industrialists, bankers, shipowners, which has made “personal responsiblity” its flag in order to hide its hostile character towards the needs of the people”.

“The people must confront this state, this economy, this social organization, if they want to save themselves and their children”, Koutsoumbas pointed out, citing also historical experience from “the great moments of popular struggle in Greece, from the storming in the heavens, such as thοse of the Paris Commune, the victories such as those of October in Russia”. “Whenever the working class, the people, demanded their needs, believed in their power and took their destiny in their hands, only then did the wheel of history turn forward”, the Communist leader underlined.

The General Secretary stressed out that “today, all those who are responsible for the current deadlocks promise better days, in an effort to deceive once again”, adding that “there is no room for more lost time and new illusions”. He explained that “the program of both the current Mitsotakis’ government, as well as the ones of the previous governments, but also the program of all bourgeois parties, is already written based on the anti-people commitments of the Recovery Fund which is the new EU super-memorandum against the people and also based on the aim of the country’s geostrategic upgrade that marks Greece’s involvement in the dangerous US-NATO plans and competitions”.

The KKE leader argued that New Democracy and SYRIZA have a common strategy “despite their particular differences” and added: “It has been proved that no such government can go beyond the rails set by the competitiveness of capitalist economy, the EU strategy and the power of the capital. As for the myth of the so-called ‘progressive government’, it has gone bankrupt all over Europe, including Greece”. Continuing his speech, Dimitris Koutsoumbas said that “the KKE comes forward and provides all its forces so that the people can organize their counterattack, so that the workers will determine the developments according to their interests” and underlined that “socialism is the real progress, the society where the workers get out of the margins of political life and participate actively in making, implementing and controlling decisions, because they have the power in their hands”.

“Social ownership is the really new, so that the economy will stop function based on the criterion of capitalist profit. On this fertile ground the central planning of production can set and achieve scientifically defined social goals in agricultural and industrial production, in social services. And the KKE is the only party that with its Program illuminates that this way can and should be opened. The KKE has a plan for today and tomorrow, a modern revolutionary program that illuminates this perspective, the capabilities of socialism and of socialist construction in Greece”, comrade Koutsoumbas underlined.

Among others, the General Secretary of the Communist Party said that the KKE “stood on the forefont of every battle against anti-people measures, for the achievement of even the slightest conquest” but “at the same time, with deep knowledge that permanent and stable achievements cannot exist in the current system, until the way to a radical overthrow is opened”.

To build a new society