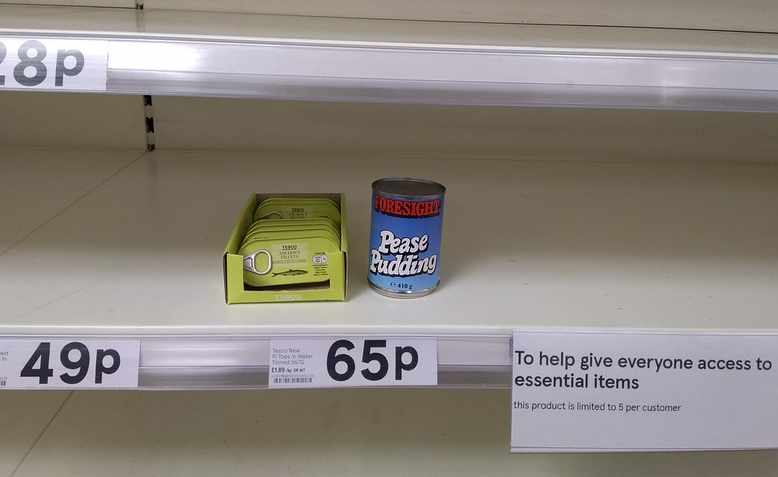 When even the Tories are talking of a winter of discontent, you know things are going to get really bad. The term refers to the series of strikes in the winter of 1978-9 at the dreary end of an unpopular Labour government which are generally attributed to helping Thatcher win her first term the following spring. Even now the Tories hark back to it in elections, denouncing the chaos and shortages under Labour. Now they find themselves presiding over a series of connected crises which point to a perfect winter storm.

The shortage of lorry drivers is only one aspect of this. It has led to big queues for petrol, empty shelves in supermarkets and waste of fresh produce. Even worse is the prospect of power shortages as a result of the rocketing energy prices, leaving Britain particularly vulnerable because of the lack of gas storage facilities.

Millions of people in Britain are going to suffer. They will face a combination of shortages of food and other goods, dramatically rising power costs, possible power cuts, rising inflation while real living standards fall, the ending of furlough. Most egregious of government policies is the cutting of the £20 uplift for Universal Credit which will leave many families cold and hungry this winter. But everyone working is being hit by National Insurance rises next spring, alongside the freezing of income tax thresholds, and the breaking of the triple lock over pensions.

All in all this amounts to a huge attack on the living conditions of the majority of working-class people.  The Tories know this and are terrified that it can cause unrest. Suddenly the cost of living has become a central political issue. But they are equally incapable of dealing with the crisis in any systematic way. This is because any serious solutions strike at the heart of everything the Tories stand for and challenge the priorities of capitalism itself.

The series of interlocking crises have multiple causes. Extended supply chains mean that Britain is very susceptible to disruption. The decline of manufacturing here means many goods are imported, especially from China. The shortage of containers (many of which are displaced following Covid disruption), as well as of drivers to move them, has contributed to shortages and higher costs.

Privatisation of British utilities has led to high costs and prices, coupled with a race to the bottom of low wages and worse conditions. Lack of training and investment in infrastructure have been the product of the drive to short term profits regardless of the social cost.

Haulage companies for example have been forcing worse wages and conditions on drivers for the last 30 years and more. As their work has expanded and become more profitable, so they have ensured that a smaller share of those profits goes to the people who actually produce them. They have relied on a massive reserve of labour, especially since 2004 when the EU expanded into eastern Europe, to enable them to keep wages low.

There are two particular issues which are contributing to the crisis now. The first is the impact of the Covid 19 pandemic, which has disrupted much of work and life over the past 18 months. Many of those in low paid often casualised work have decided that they no longer want to work in hospitality, care homes or haulage. This is not just about pay – appalling though that is – but about poor conditions, long unsocial hours, pressure of work and insecurity.

The second issue is Brexit. This is not the main reason, despite the best efforts of the Guardian and other liberals to make it so. The gas crisis and lorry driver shortage exist throughout Europe. However there is no longer free movement of labour into Britain from the EU, but instead a points system which deems most of these workers ‘unskilled’ and so denies them entry. Again, many EU citizens who returned during the pandemic are not showing any desire to return.

So we are heading into a winter where all these issues are coming to the fore and should spell much greater unpopularity for the government. The Tories are aware of this and they’re frightened. Recent actual poll results, for example in the Batley and Spen and Amersham and Chesham by elections, have been much worse for them than their headline polling suggests. The problem is what can they do? They don’t want to tax their own supporters, so shy away from raising any sort of taxation on the rich. They will not challenge the private landlords or employers.

They don’t want to allow any relaxation of immigration because of Brexit, but are going to have to, with the new scheme to allow 10,000 EU workers temporary visas to ‘save Xmas’. Whether there are 5000 lorry drivers and another 5000 food processing workers desperate for the chance to work here in poor conditions on a temporary basis is an open question. But the scheme is definitely not going to solve a crisis of this magnitude.

The Tories must be giving thanks for Keir Starmer who has, as ever, provided absolutely no opposition to one of the most corrupt and incompetent governments ever.  Labour has no answers to this crisis and is terrified of suggesting anything that might be associated with Corbynism or even mild levels of social democratic reform.

Yet it is obvious that this situation requires a level of change which is quite fundamental.

Basic demands should include:

A society wide crisis opens up all sorts of questions about how it is run and in whose interests. We face record levels of inequality, increases in the rate of exploitation, as well as wider existential crises of climate change and war. The Tories are right to fear a return to the 1970s but let’s remember that union membership then was double what it is now, there were no anti-union laws which make it much harder to recruit and take action, and levels of strikes were much higher. However there are signs of a very small – at present – industrial recovery in the past months. In the course of battling against this latest attack, working people can begin to rediscover our power and organise to run society.

In the mainstream political arena we can expect little from Starmer and the Labour leadership. Indeed we can expect any serious strike to be met by opposition from Labour, as we saw for much of the 70s and again with Neil Kinnock during the miners’ strike of 1984-85. That means our strength has to be built through rank and file organisation and solidarity from below. It also means we need to find ways for the left who oppose the priorities of capital to organise collectively – if not yet through a new party, then through united front organisation which can build on victories and try to avoid defeats. The People’s Assembly demo at the Tory Party conference this weekend in Manchester is ideally timed to protest against the latest crisis and unite all those fighting back.

Imperialism and its discontents