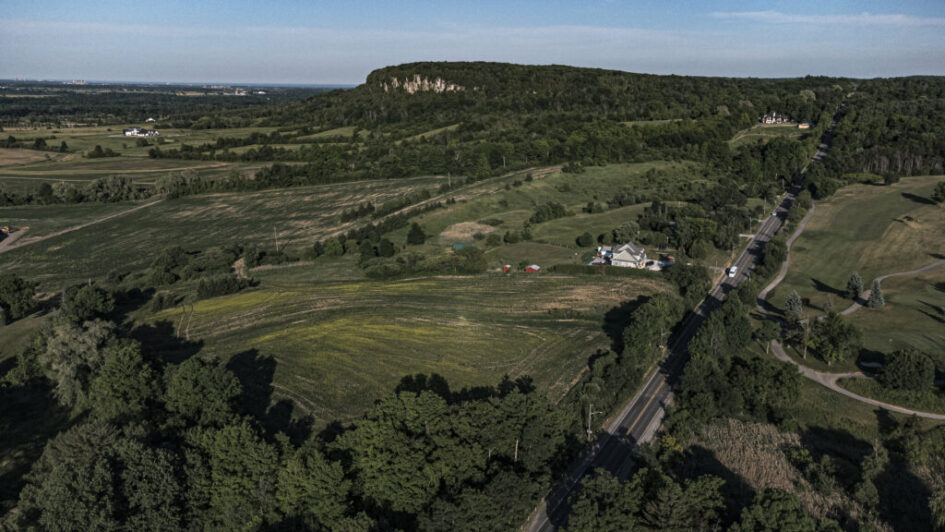 The Ontario government announced plans Friday to open up thousands of acres of land in the protected Greenbelt for development, going back on years of promises to leave it intact.

The rationale, according to Municipal Affairs Minister Steve Clark? To get housing built: 50,000 new homes, to be exact. The move is part of the Progressive Conservatives’ push to tackle Ontario’s housing crisis, a plan that has so far involved vast cuts to environmental protections critics say are risky and unnecessary.

Clark has said the flip-flop was a “tough decision.” And Premier Doug Ford blamed the “inaction of previous governments that didn’t want to take the bold steps to get housing built.”

Ford’s plan to open up Ontario’s Greenbelt is essentially a massive land swap. The idea, the province says, is that it can drop some pieces of the protected area and add other, bigger pieces to make up for it. But the Greenbelt is huge, important and contentious, and changes to it are the result of decades of pressure from opponents.

“It threatens the stability and certainty of the Greenbelt,” said Victor Doyle, a former provincial planner who’s credited as an architect of the protected area.

“It undermines its permanency. … This is the edge of the wedge that creates an incredibly powerful precedent that will weaken the Greenbelt significantly — and allow it to be eroded through a death by thousand cuts.”

Ontario’s Ministry of Municipal Affairs did not answer detailed questions from The Narwhal. Instead, it sent a blanket statement saying it is “considering every possible option to get more homes built faster.”

Here’s a breakdown of what’s happening, how it could affect the environment and whether building on the Greenbelt is actually necessary to tackle the housing crisis.

The Ford government’s pitch is to take 15 snippets of Greenbelt land out of the protected area, totalling 7,400 acres. In exchange, it would take another 9,400 acres from elsewhere and make them part of the Greenbelt.

The 15 parcels to be taken out are located in the Greater Toronto and Hamilton Area, in the communities of King, Vaughan, Richmond Hill, Whitchurch-Stouffville, Markham, Pickering, Ajax, Clarington, Hamilton and Grimsby. One includes land that’s part of the Duffins Rouge Agricultural Preserve, which the province watered down protections for last month. The province said it chose sites on the edges of the current Greenbelt and next to urban areas. (A complete list of the sites and their addresses is available on Ontario’s Environmental Registry.)

The deal comes with a few strings attached: developers would have to make and execute plans to build on those lands fast. They will have to show proof of “significant progress” by 2023 and start construction by 2025, otherwise the government will return the land to the Greenbelt, the province said Friday.

The Ford government is proposing to swap in two different types of land to replace what it takes out.

The government said a series of 13 urban river valleys would be given new protection. Some are expansions of urban river valleys that are already in the Greenbelt, and some are new. Ontario previously announced it would add these to the Greenbelt earlier this year, and received backlash because all were already protected from development through other mechanisms. The province didn’t answer questions from The Narwhal about how large the river valley additions add up to, so it’s not clear how many of the 9,400 acres being added to the Greenbelt will actually result in new land being protected.

The second is a chunk of the Paris-Galt Moraine, a vast rock formation stretching from the Toronto suburb of Caledon down towards Lake Erie. The section that would be added to the Greenbelt is a relatively small portion in the town of Erin, near Caledon.

Adding the Paris-Galt Moraine to the Greenbelt is an idea that’s been around for a while — Ontario Green Party Leader Mike Schreiner has proposed a more ambitious version of it in the past. The moraine includes the headwaters of several rivers and provides drinking water for several communities.

The governing Progressive Conservatives have been hot and cold on the Paris-Galt Moraine idea over the years. The party initially pitched it as part of a Greenbelt expansion earlier this year, but backed off before ultimately including it in this new Greenbelt land swap.

Will the Greenbelt changes actually be a net benefit for the environment?

We don’t know for sure. But existing evidence shows it likely won’t — and the government hasn’t released proof that it will.

The addition of the new urban river valleys to the Greenbelt doesn’t add much, since they were protected anyway. And, although the protection of part of the Paris-Galt Moraine could be positive, it’s not clear how to weigh the ecological value of it against the loss of other pieces of the protected area because the government hasn’t released evidence to back up its plan.

Another thing to consider is the importance of habitat connectivity. Water flows and animals migrate. Experts say you can’t just draw a line around a piece of land, say it’s protected and assume it will all work out — how that land is connected to what’s around it will also define how successful conservation efforts there might be. That’s why land on the edges of the Greenbelt is just as important as what’s at the centre.

One example of this is Carruthers Creek east of Toronto: though parts of the waterway are protected through the Greenbelt, its headwaters aren’t. Environmentalists have long worried that development in those unprotected headwaters could degrade water quality and contribute to flooding in the protected areas downstream.

Connectivity was top of mind when the Greenbelt was designed. Though the legislation that created it may technically permit land swaps, it was never intended to allow them because the land it protects was intentionally chosen, Doyle said.

“We wrote innumerable briefing notes saying that swaps were not envisioned by the act,” he said. “The argument that you could take land out, particularly along the southern edge, and add it on the outer edge as they’re proposing would mean in the fullness of time, the Greenbelt will migrate. It’ll end up in northern Simcoe County if this pattern is continued.”

Environmentalists say they’re also worried this move could unleash a flood of other requests to open up the Greenbelt for development. It will “start a never-ending queue of Greenbelt land speculators at the minister’s door, each with their own convenient rationalization for paving their own patch of Greenbelt,” Phil Pothen, the Ontario environment program manager at the non-profit Environmental Defence, said in a statement.

The province didn’t answer a question from The Narwhal about whether it will consider other Greenbelt land swaps in the future.

Is this actually necessary to solve Ontario’s housing crisis?

Environmentalists and opposition parties have also argued for a long time that a lack of land isn’t the reason for Ontario’s housing crisis, and that more than enough has already been set aside for development.

Earlier this year, the Ontario government’s own Housing Affordability Task Force delivered a report that said the same thing: “A shortage of land isn’t the cause of the problem,” it read. “Land is available, both inside the existing built-up areas and on undeveloped land outside greenbelts.” A bigger problem, the report said, is that Ontario hasn’t used the land it has efficiently.

If the Ontario government has evidence contradicting the task force, it hasn’t shown its work. The province didn’t answer The Narwhal’s questions about the proof behind its decision Monday.

Where did this idea of Greenbelt changes come from?

Ford himself pitched a plan to open the Greenbelt for development at an event in 2018, before he became premier. And at the time, he said the idea came from developers, many of whom have donated large sums to his party.

Many in the development industry have been against the Greenbelt since before it was created, as it limits which land can be built on. And many have been pushing for years to get lands they own removed: in 2017, the former Liberal government did a review of the protected area’s boundaries, and received over 700 requests to sever land from it. Of those, it only approved a handful of minor adjustments.

“I’ve already talked to some of the biggest developers in this country and again, I wish I could say it’s my idea, but it was their idea as well,” Ford said at the 2018 event, which was captured on video. “Give us property, we’ll build and we’ll drive the cost down. That’s my plan for affordable housing.”

At the time, Ford also pitched a land swap, saying he’d add an equivalent amount of land to the Greenbelt for each piece taken out. (His current plan goes above that, aiming to add more land that what was taken out.)

Backlash was swift and enormous, and Ford backed down. In the years since, he’s repeated promises not to touch the Greenbelt, over and over again.

Nowadays, other government advisors are saying it’s a good idea — most notably, former Mississauga mayor Hazel McCallion, 101, who was recently appointed to the government’s Greenbelt Council. The Ontario government pays the council to give Minister Clark impartial advice on how to best steward the protected land. But the council has also been a source of political controversy in recent years. Seven members of the council resigned in 2020 in protest of the Ford government’s changes to environmental policy.

That McCallion is now at the helm of the council may give clues about what kind of advice the government is currently hearing. Nicknamed the “Queen of Sprawl,” McCallion was mayor of Mississauga from 1978 to 2014, during a period where the city rapidly expanded outward with the type of car-dependent, emissions-intensive suburbs environmentalists tend to fight against. Though McCallion also pushed for denser development later on, Mississauga’s last piece of undeveloped land is now spoken for, and some critics say what happened there should be a cautionary tale for other cities.

“I have long been advising governments of all stripes to let municipalities build where they have existing publicly funded infrastructure and service capacity,” McCallion said in a statement Friday. “It just makes sense not to waste public investments and resources, and it means we can build homes faster while protecting land that should be protected. It’s a win-win.”

What happens next with Ontario’s Greenbelt?

The Greenbelt land swap isn’t final yet. In Ontario, governments must consult the public about changes to environmental policy for 30 days — citizens can give feedback though the environmental registry until Dec. 4, 2022.

If the Ford government pushes the swaps through, it might still take a while to sort out the details. When the Greenbelt was first designed in 2005, the process was contentious, and there’s every indication these changes will be too.

Banner:
Farmland in the Greenbelt outside of Milton, Ont. The Ford government is proposing opening up 15 parcels of Greenbelt land for development.

Communists in Ontario call for escalating mass action against Ford

Doug Valentine on 70 years of the CIA in Ukraine