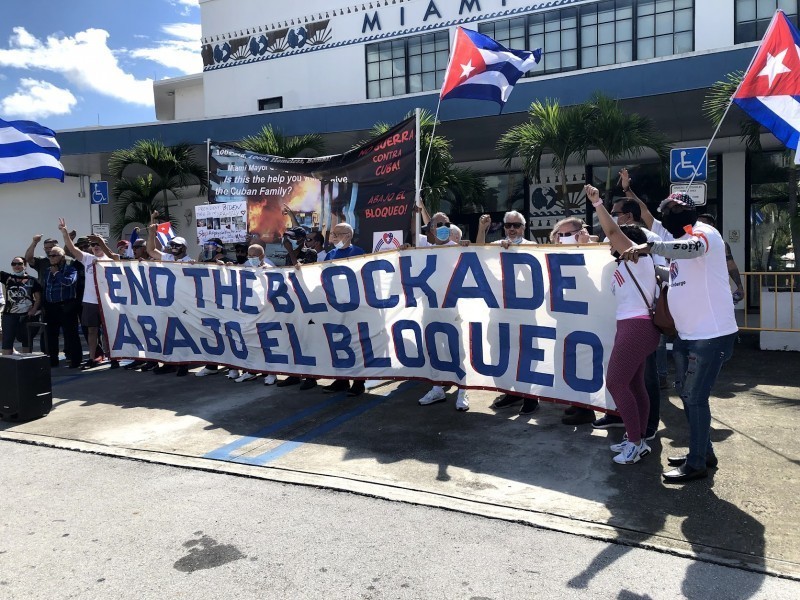 Protest against U.S. blockade on Cuba.
(Fight Back! News/staff)

Miami, FL – In the morning hours of Sunday, September 26, roughly 60 protesters gathered outside of Miami City Hall as part of a National Day of Action to demand President Biden end the decades-long blockade of Cuba. The national call was put out by the Cuban solidarity organization Puentes de Amor (Bridges of Love) and was attended locally by Cuban Americans, anti-war activists and community members.

Protesters met outside of the city hall building, holding a large banner that read, “Abajo el bloqueo,” and chanting, “Puentes de amor” and “Biden, end the embargo!” They also listened to a lineup of speakers outlining the impact the embargo has had on Cuba, and who also denounced Miami Mayor Francis Suarez’ call for the United States to use “humanitarian military intervention” against the Cuban government, as the U.S. did in Panama and Yugoslavia.

“When the U.S. starts attacking your country because they don’t like your president or your system, they don’t care if you support the government or not, they will kill indiscriminately and it is your people that will suffer,” said protester Svetlana Radojcic, who spoke to the crowd about her firsthand experience during the U.S.-NATO bombing of Yugoslavia. “So the person who calls for military intervention is either ignorant or very, very cruel.”

At noon, the protesters made their way from the city hall to their cars, all donned with “El bloqueo es un crimen” slogans. They drove through Miami to Margaret Pace Park, where they listened to more speeches, danced to traditional Cuban music, and rejoiced in the significance of gathering such a large group in Miami against the far-right politics that seem to dominate the area. The activists all committed themselves to taking further action until the illegal U.S. sanctions against Cuba are ended.