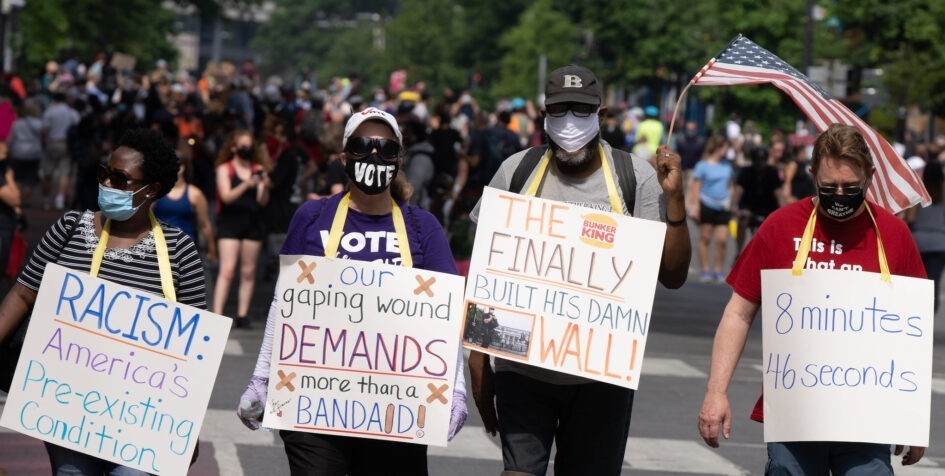 IV. The reach for fascism One of the many demonstrations protesting the police murder of George Floyd, this one in Washington, D.C., on June 6, 2020. Photo: Victoria Pickering

Fascism is enabled by the rulers in response both to capitalism’s weakness—economically, as well as the disarray in international relations—and to the strength of revolt. In addition to the massive Black-led revolt of the past year in the U.S. that spread internationally (see coverage in N&L), many strikes erupted over unsafe conditions, speedups and very long and/or uncertain hours during the pandemic.

The revolt sparked by police killings expressed a revolutionary reach for a totally new human society, as seen in many declarations like one from Aislinn Pulley of Black Lives Matter Chicago: “This is how the system operates. It’s not broken. When we fight for Breonna Taylor, we fight to destroy the system and create a new one.”

Revolts keep breaking out across the globe, from Cuba to Lebanon, from Iran to India, from South Africa to Colombia. (See “Latin America Notes,” Sept.-Oct 2021 N&L, p. 11.) Even where the confusion of a great part of the Left hinders the needed solidarity—especially in countries like Cuba and Syria where oppressors pretend to be anti-imperialists and point to the reactionary elements that always jump on the bandwagon and try to misdirect revolts—the rulers are well aware of the instability of their dominance.

Therefore, they have been trying out various kinds of sticks and carrots to quash unrest. One is fascism, to which sectors of the capitalist class have given funding, organizing help and media support over the last two decades in many countries. It would be a mistake to stick to narrow definitions of fascism, as if it can only be a copy of what arose in Italy and Germany after World War I. Its essence is highly authoritarian, militaristic counter-revolution that fuses the state, party and capitalist economy (even when pretending to be anti-capitalist), and tries to rope in masses, including from the middle and working classes, by exploiting nationalism, racism, sexism, heterosexism, xenophobia, propagandistic big lies and ideological delusions. It plays on the uncertainties inherent in disintegrating social relations and anxieties about precarious economic, political and cultural situations.

This retrogression feeds and feeds off of the epidemic of violence against people of color—especially Asians in the past year—Jews, immigrants, LGBTQ people and women. The killing of six people in Plymouth, UK—including a little girl, the shooter’s mother, and himself—was the latest violence from the woman-hating “incel” movement that sprang into view with the 2014 Isla Vista murders fueled by misogyny. The everyday violence of this society—from “honor killings” to Queer-bashing, from racist shootings to brutality by police and military, including UN peacekeepers—are part of the soil from which fascism grows.

This type of counter-revolutionary movement has been cultivated by rulers fearing revolution and enabled by the normalization by the U.S. and international institutions of genocides in Bosnia, Rwanda and Congo, and Syria. Just as crucially, its growth was paved by the philosophical void on the Left, a substantial part of which is still accepted as “Left” despite its ideological confusion that aligned it with genocides in Syria and Bosnia.

FROM BOSNIA TO SYRIA

The fall of Communism in East Europe and the USSR at the beginning of the 1990s occurred in the context of a profound philosophical void on the Left. Far from birthing a new era of freedom, it led to the ascendancy in those countries of neoliberal free-market devastation, narrow nationalism, and/or authoritarianism. Amid the ideological retrogression, the collapse of Yugoslavia descended into the genocide in Bosnia and Herzegovina. The U.S., with NATO support, corralled the Bosnians into a settlement that enshrined ethnic cleansing in the very structure of the still-existing divided Bosnian government. (Joe Biden advocated a similar ethnic partition of Iraq in 2006.)

News and Letters Committees declared this to be a test of world politics that called for filling the philosophical void, beginning with the projection of the liberatory banner of revolution and a new human society, the negation of the negation, rather than stopping at the first negation of either state-capitalist Communism or private capitalism. (See our pamphlet Bosnia-Herzegovina: Achilles Heel of Western ‘Civilization.’) The Left largely failed this test, almost universally disregarding the positive dimension coming from the struggle of Bosnians against genocide and reaching for a new multiethnic society. Instead, many Leftists openly supported the Serbian nationalism of Slobodan Milošević, Radovan Karadžić and Ratko Mladić, which they hailed as “anti-imperialist” or even “socialist.” All too many others equivocated but did not object to participating in coalitions with these reactionary would-be Leftists. It was the beginning of the return of Red-Brown alliances between elements of the Left and the far Right.

The Rwanda genocide of 1994 occurred during the same period, with the complicity of France. The inaction of other European and North American countries paved the way for the 1996-2003 “African World Wars” centered in Congo but drawing in Rwanda, Uganda and other neighboring countries, with outbreaks of violence still continuing to this day.

The normalization of genocide—by both the imperialist nation-states and much of the Left—intensified the reactionary trend in world politics. The deflation of hopes for the possibility of a transformed, multiethnic society, and the strengthening of narrow nationalism, were expressed in everything from the democratic backsliding in the U.S. led by Newt Gingrich to the 1996 election of Benjamin Netanyahu in Israel soon after the Clinton administration imposed the Dayton Accords on Bosnia. When the revolutionary wave of the Arab Spring broke out in 2010-2011, the Barack Obama administration first tried to co-opt and limit it by giving verbal support, and briefly intervening militarily in Libya. But in practice it was more inclined to learn to live with the most vicious counter-revolutions than to support the upsurges from below. This became a blinding green light to fascism after Bashar al-Assad’s regime rained chemical weapons on East Ghouta, Syria, in 2013, killing over 1,000 civilians. What the Obama administration actually did in response to Assad crossing Obama’s “red line for us” was to back off threatened military action in a “deal” that opened the door to Russia’s intervention in support of Assad. That became a turning point, not only for the state powers, but for some of the Left. As we put it in our Nov.-Dec. 2013 Lead on “The Syrian Revolution as the Test of World Politics” by Gerry Emmett:

“At the moment that it seemed like the U.S. might actually launch some extremely limited strike on Assad’s forces, there was a rush by many ‘peace’ activists to scream ‘Hands off Syria!’ without acknowledging that the Syrian people are fighting a revolution against a genocidal fascist state. Such one-dimensional politics have deadly consequences….

“At its worst, this attitude led some to align with the Tea Party and other reactionaries as if the radical Right was an anti-war option, rather than the seed of future genocidal imperialist world wars….

When the far Right during their rally in Charlottesville, Va., in August 2017 raised the slogan, “Assad did nothing wrong,” they could equally claim to have learned it from Obama or from “Left anti-imperialists” who devour Russia’s RT network news/propaganda.

The normalization of genocide and fascism from Bosnia to Syria poisoned the world’s political atmosphere, fertilizing the ground for the growth of fascism in Europe and North America as well.

TREND TOWARD FASCISM IN U.S.

Fascism is aided by increasing isolation, crumbling of community and its replacement by online algorithmically manipulated and often sham community, and scientifically honed, systematic manipulation of human beings, the foundation upon which vehicles of advertising and propaganda such as social media and cable news networks are built.

The descent of the Republican Party and the capitulation of the Democrats must be taken seriously. The fossil fuel industry, desperate to fight back proposed climate action that would restrict their business, is one of the major funders of the most fascist Republican politicians who are undercutting democracy and propagating feverish delusions that combine climate denial, COVID denial, election lies and conspiracy theories that scapegoat immigrants, Trans people, uppity women and Blacks. By no accident, Democratic Senator Joe Manchin is also a favorite of the fossil fuel industry and is himself a millionaire from owning a coal brokerage. Manchin is an obstinate supporter of the filibuster.

It is no exaggeration to say that a large part of the Republican Party aims for single-party rule. Some elements, which have risen in influence within the party, openly advocate theocratic totalitarianism. One such, William Barr, even rose to one of the most powerful positions in the federal government, the U.S. Attorney General.

The laws dictating brainwashing of both students and adults reveal how deep the totalitarian streak has become, as do the laws trying to control elections and the party’s embrace of denialism about the pandemic.

Sympathy for the devil: Another bourgeois historian prefers fascism