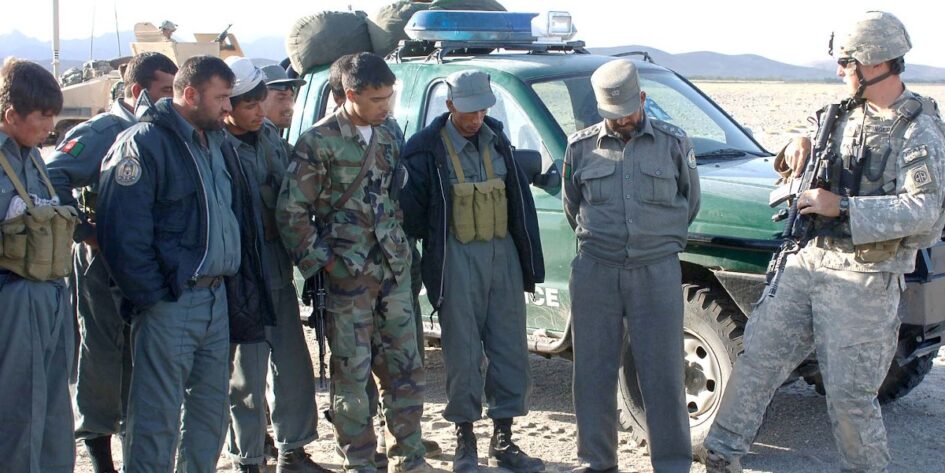 August 5, 2021 – From Red Pepper
277 views
Members of the Afghan National Police being trained by the US army in Ghazni province, May 2007 (Credit: Justin Holley)

Located in Afghanistan’s remote south-eastern Paktika province along the border with Pakistan and the western edge of the Sulaiman mountains, the Sar Hawza district is home to the infamous Route Jeep – a major infiltration route into Paktika and a gateway to Afghanistan’s northern provinces. Hezb-e-Islami, the Taliban and local insurgents all have power bases and strongholds in the region. Sar Hawza has seen battles, air strikes, night raids, drones and the rise of local warlords and petty criminals who now work at the behest of the US forces. By the time I got there in 2010, US forces and their Afghan allies had been fighting for years to assert control over the traditional Taliban stronghold.

Afghan Local Police (ALP) commander Mahmud was my guide in Paktika. In his lifetime he had fought against the Soviets, the Talibs and a few others he called traitors. He was the kind of man whose stories changed every time he told them. The commander was the creation of a ruptured society that required a certain murkiness of character and malleability of beliefs. He had to negotiate alliances and friendships with an unlikely cast of characters, ranging from local warlords to the US military officers he was tasked to work with.

In his latest role, he recruited, trained and commanded the ALP. Created at the behest of and funded by the Americans, the ALP was meant to ‘secure local communities and prevent rural areas from infiltration of insurgent groups’. It was not a real police force, though, but a local armed militia created to fight the Taliban. These militias were mostly made up of poor, orphaned, uneducated men and boys who were forced to fight under the threat of violence.

I photographed ALP cadets with newly issued guns and cartridges. Among them was a boy of barely 13 who was wearing body armour with ammunition and holding a bag of M&M’s. When he smiled, he tried to hide his chipped teeth, which made him look like the child he was. Almost 30 years before, this region had sheltered young rebels fighting the Russians. Then the US had given them AK-47s and combat rations such as peanut butter.

Forcefully conscripted into a war they had no interest in, these boys were being prepared for slaughter; the accidental recruit was meant to fight the accidental terrorist across the border in Pakistan. The US sergeant at Sar Hawza denied arming underage boys, describing this as ‘an Afghan solution to an Afghan problem’. When I repeated this to Commander Mahmud, he responded with silence.

Over the next three weeks, I heard stories of war, valour, exile and disenchantment in these border villages. Here, boundaries were messy and state sovereignty fragmented, creating overlapping and alternating allegiances. The map of belonging people used was drawn from history passed down by their ancestors. The newer political maps drawn by outsiders were something else altogether.

In 1893, the British decided that formal borders needed to be established between Afghanistan and colonial British India to limit Russian expansion in the region. In October of that year, the Indian foreign secretary, Sir Henry Mortimer Durand, was sent to negotiate and demarcate the border with the emir of Afghanistan. Durand arrived on the heels of two previous envoys, Sir Alexander Burnes and Sir Louis Cavagnari, who were both murdered by angry Afghan mobs. Cavagnari was massacred by mutinous Afghan troops inside his home in Kabul. Burnes was hacked to death by a mob, and the following day his head was placed on a pike and displayed in the public square.

Mortimer Durand fared better, and he and Emir Abdur Rahman Khan signed the agreement that created the Durand Line between Afghanistan and British India. The agreement – a single-page document with seven clauses – created a frontier without any identifying structures, not a border. When the men tasked with the job of demarcating the precise line arrived, they found that there were areas represented on the map that did not exist on the ground, and there were parts that existed in real life that were not marked in the maps.

For the Pashtun tribes actually living on the terrain being mapped, the Durand Line divided their lands, families, and communities in two. Half of the Pashtun tribal region became part of British India, and the other half remained part of Afghanistan. The British historian Bijan Omrani writes: ‘The people on the ground did not like the idea of being under any sort of British jurisdiction. The officers who were demarcating the Line soon found themselves the object of unwelcome attention, mainly in bullet form. By 1897 there was a general uprising all over the area, which it took 60,000 British regular troops to pacify’.

The British fought three wars in Afghanistan over a period of 80 years, finally granting Afghanistan independence in 1919. The 1947 British departure from the subcontinent, and the resulting independence for India and Pakistan, called into question the legality of the Durand Line and Afghanistan’s border with the newly formed Pakistan. Afghanistan announced that all previous Durand Line agreements, including the subsequent Anglo-Afghan treaties, were invalid, since the treaties made between the British and the Afghans lapsed at independence.

The Afghans have always claimed that the agreements that created the line were obtained under duress. They questioned the veracity of the maps and suggested that the British fabricated both the map and the agreement after the fact (something the British regularly did). They also questioned whether the emir, Abdur Rahman Khan, and the British Crown intended the boundary to be a legal international boundary, instead of a less formal demarcation of areas of influence.

Local history and the people here had no respect for the line. Yet at the moment of Indian independence, the Pashtun tribes divided by an arbitrary line were not given any right to self-determination. They could only choose to join India or Pakistan – independence, or rejoining Afghanistan – was not an option. Pakistan, for its part, claims to be the inheritor of the British agreements at independence, arguing that the frontier, the Durand Line, is a legitimate international boundary as of 1893 and was confirmed by later treaties in 1905, 1919, 1921, and 1930. What started as a line drawn to create a frontier between two imperial powers had become a border.

The day I left Sar Hawza, Commander Mahmud prepared a lavish meal of goat and rice and sent me away with words that betrayed his earlier silence: ‘We take orders from an emperor who is a stranger to us… We have been sending boys to die to defend a line that doesn’t exist. Sometimes they become cheaper than dried chickpeas, but orders are orders. Memory is a funny thing. It differs from the history you came here with.’ He paused and added, ‘It is the coloniser’s map, and they had no respect for our land. Why should we respect their borders?’

This is an edited extract from Midnight’s Borders: A People’s History of Modern India, published by Melville House on 27 May 2021