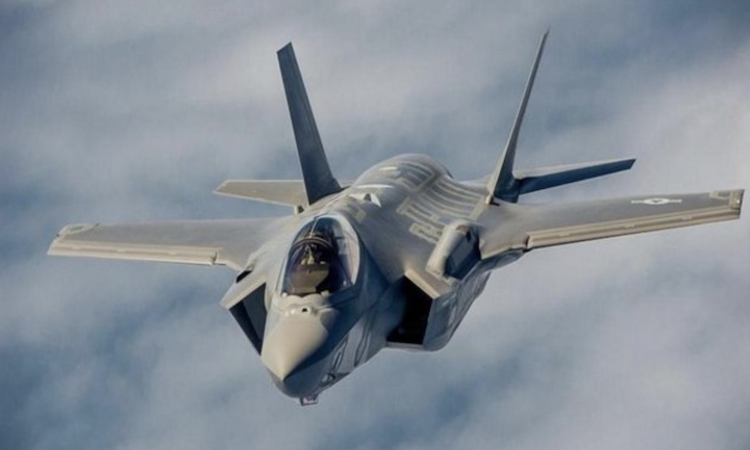 The shock decision by Dubai to suspend its earlier plan to buy 50 state of the art F-35 fighter jets from the USA, ticketed at $23bn, opting instead to buy Rafale jets from France, hammers another nail into the coffin of US hegemony.

Dubai’s surprise move deepens splits in the imperialist camp, is a further blow to the debt-laden US economy, and further undermines the international authority of US imperialism.

President Emmanuel Macron must be rubbing his hands in glee over this setback for the US arms industry, coming hard on the heels of Australia’s decision to turn down its planned purchase of French conventional submarines in favour of a joint venture to build nuclear subs under the aegis of the US and Britain in the Aukus lash-up. This does not bode well for good relations in the thieves’ kitchen.

Most significant of all, this act of defiance by the United Arab Emirates gives a glimpse of the degree to which America’s star is waning. The smug assumption that all the US needs to do to keep its Arab allies on message is to assume the role of Lady Bountiful, handing out invitations to buy the latest in military hardware – is being shattered before our eyes.

It is certain that the revolt by the UAE, a close and trusted ally of the US, will have a ripple effect across the whole region, including even Saudi Arabia.

The UAE was until recently content to wait in the queue, humbly petitioning for the privilege of giving US arms manufacturers a massive cash infusion. Its patience was eventually rewarded: one of the last actions by outgoing president Donald Trump was to give the deal his blessing.

But when it became clear that the passage of the deal implicitly depended on Dubai pulling the plug on all cooperation with Huawei’s 5G technology, eschewing joint Emirati/Chinese plans to build a commercial port, and generally kowtowing to US diktat, the French offer of Rafale jets in the end came to be seen as a better deal.

Whilst Dubai may not want a fight with Washington, the F-35 cancellation speaks volumes about the declining influence of the US after the Afghan debacle. It is a sign that Dubai, and by extension other Gulf states, is keeping all its options open. Having learned to say no to America once, the habit could prove infectious.

Not so long ago, the US had hoped that a combination of bribery and threats from Uncle Sam would result in the ‘deal of the century’, ‘normalising’ Israel’s relations with the Gulf states. But rather than thanking the US for affording it the privilege of buying its shiny new jets, and in exchange sucking up to the zionists, Dubai’s volte face has just urinated on the dying embers of that deal.

Iranian deputy foreign minister Ali Bagheri was recently invited to Dubai for talks with the president’s senior adviser, Anwar Gargash. By Bagheri’s account, the two agreed to open a new page in Iran-UAE relations. It will be interesting to see whether this translates into any change in Dubai’s foreign policy, notably its entirely reactionary role in the war of oppression against Yemen.

Though most of the Gulf states are traditionally hostile to Iran, there is little enthusiasm for President Joe Biden’s foot-dragging over the resumption of nuclear talks with Tehran.

Iran has set out its position on the JCPOA treaty with complete clarity: when the US drops the sanctions and fulfils its obligations under the treaty which it broke, then Iran will resume full compliance with the treaty’s terms.

A recent joint meeting of the Gulf Cooperation Council (GCC) and a spread of European Union countries put pressure on US envoy to Iran Robert Malley, stressing that “a return to mutual compliance with the [nuclear deal] would benefit the entire middle east, allow for more regional partnerships and economic exchange, with long-lasting implications for growth and the wellbeing of all people there, including in Iran”. (Russia is primed for a Persian Gulf security ‘makeover’ by Pepe Escobar, The Saker, 2 December 2021)

Behind these lofty sentiments lies an urgent practical need: the need to release Iranian oil back onto the market, thereby (it is hoped) putting a brake on inflation. The reluctance of Washington to get on with it and restore the JCPOA is doing nothing to win friends and influence people in the region.

Conversely, China and Russia are steadily increasing their importance in forging regional partnerships and mutually beneficial trade and diplomatic links. Whilst the White House dithers over the JCPOA nuclear deal, Iran is already looking to a post-sanctions future in which both Russia and China loom large.

A straw in the wind is Iran’s bid for membership of the Shanghai Cooperation Organisation (SCO), supported by Moscow. And in a joint venture of Iran, Russia and China, plans are afoot to develop the enormous Chalous gas field under the Caspian Sea, which could supply over half of EU gas needs for the next 20 years.

The massive Chalous site is thought to be worth $5.4tn, and Iran, under sanctions and military threats from Israel and the US for so many years, lacks the capital required to develop this enormous field on its own. Under the deal, which is thought to give Iran about a 25 percent stake, all the necessary technology to develop the site will be transferred to Iran.

In striking contrast to such useful contributions to Iran’s independent development, the weapons of mass destruction pumped into the middle east by the US arms industry contribute only more destabilisation, death and misery, in return for billions of dollars pumped back into the bottomless pit of the US economy.

What’s more, the ‘lucky’ countries that successfully bid for the opportunity to buy another clutch of F-35s would be well advised to check under the bonnet first. Because in addition to the lethal hardware, the F-35s come with some remarkable software.

“All F-35 jets in the sky and on the ground are members of a huge automated logistics support system. The serial number, offline time, use time, upgrade and maintenance status of all parts of each aircraft are in Lockheed’s database …

“Lockheed not only provides remote technical support, but also remotely monitors the use of any aircraft, including its mechanical status, route, mounting and manoeuvring. The same system also manages the maintenance and flight crew, not only their qualifications and regular assessments, but also their promotions.

“Personnel who have not had their qualifications approved by Lockheed are not allowed to connect to the network or log in, so they cannot do overhauls and maintenance. Lockheed can remotely lock any F-35 in the world …

“This is a double-edged sword for any user. On the one hand, the maintenance efficiency and quality, as well as the fleet dispatch rate, have been greatly improved. On the other hand, all users face a national security risk.

“In theory, Lockheed can monitor the US air force. In practice, Lockheed and the US air force work closely together. The US maintains full-time monitoring of any country that uses F-35s. However, other countries cannot look at the operations of the US air force.” (Justice served for China as UAE scraps F-35 deal by Chen Feng, Asia Times, 28 December 2021)

So as the paranoid sinophobes continue their fruitless search for non-existent ‘back doors’ in Huawei’s 5G technology, supposedly designed to facilitate all manner of Chinese skulduggery, outside in plain view on the front lawn sits the real Trojan horse, bought and paid for.

The Fragility of Order

Instead of Policing the Rule of Law in Other Countries, the US Should Get Its Own House in Order

US undercuts the rules-based order

USA: The decay of capitalist education in 24 seconds (VIDEO)

Assange can be extradited to USA: rules complicit UK court