Dull and duller: The NDP’s totally predictable capitulation to the Liberals 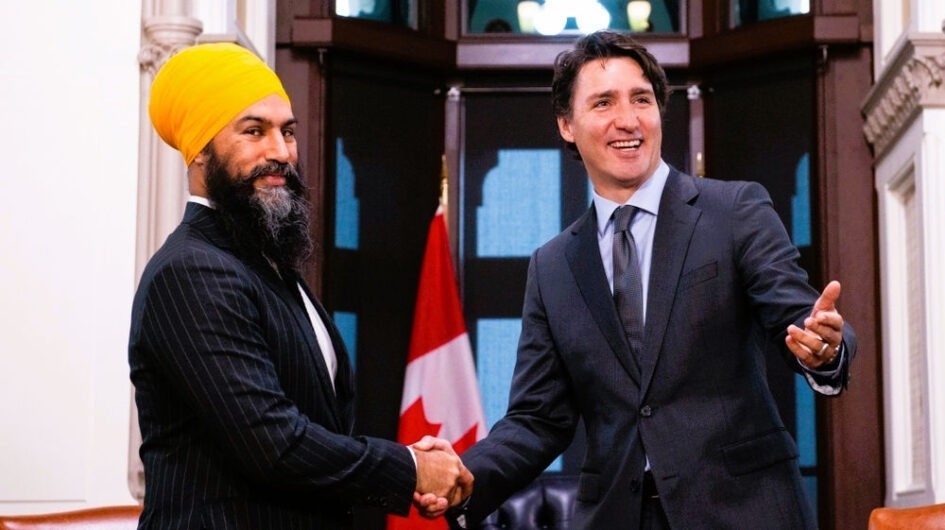 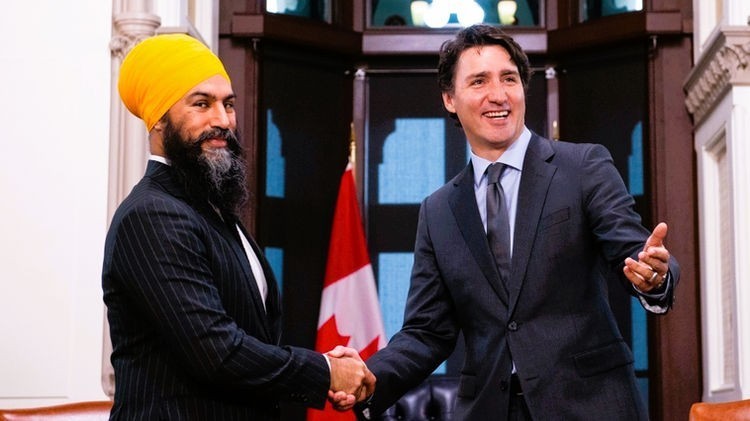 It has been interesting to watch the reaction to the coalitionesque agreement reached between the Liberals and the NDP on March 22 over the last two days.

For anyone unfamiliar with it, according to the NDP press release:

The arrangement lasts until Parliament rises in June 2025, allowing four budgets to be presented by the government during this time. To ensure coordination on this arrangement, both Parties commit to a guiding principle of “no surprises”.

In exchange the Liberals agreed to a number of NDP “demands” in terms of policy. We will return to these later.

It is a de facto coalition government, though with the NDP not getting any members of the cabinet.

The right’s response was totally predictable. Cries of “creeping socialism” and warnings of looming “out of control spending” or other things along these lines have been numerous with varying levels of outrage. There has also been the usual nonsensical claim that somehow this agreement between two parties that the Canadian electorate gave a majority in parliament is “undemocratic”. Candice Bergen, the interim Conservative leader said that Canadians “did not vote for” this, which is inane and absurd as they literally did vote for the makeup of the parliament that allows it.

It is how our deeply flawed system works, as she fully knows. This system should have been changed a long time ago, but none of the major parties, including the Conservatives, have any serious interest in doing so as they will never win a really undemocratic “majority” in parliament with just 35-42% of the vote again. The NDP could have made electoral reform a part of any deal, but notably they did not.

The reaction on the left has been more interesting.

Many centre-left progressives, unions and social democrats are thrilled with it. They buy into the NDP’s claim that it will lead to historic advances in healthcare coverage and funding as well as positive steps in other areas.

Two parties, together representing a majority of Canadians, have put partisan bickering aside and are cooperating to deliver policies and programs that will dramatically improve the lives of citizens. This is how we got Medicare, now we’re finally going to get Pharmacare, public dental care and a host of other policies that will improve the lives of ordinary Canadians in tangible, long-lasting ways.

This is certainly how the NDP itself is spinning it, though looking at the details the spin here overstates the plans significantly. It is not clear that we are “finally” going to get anything of the sort.

The dental care is not universal, it is means-tested and will not apply to all who will qualify until at least 2025. Given that that is an election year it may not apply to everyone eligible ever.

The pharmacare “plan” is not a plan.

Continuing progress towards a universal national pharmacare program by passing a Canada Pharmacare Act by the end of 2023 and then tasking the National Drug Agency to develop a national formulary of essential medicines and bulk purchasing plan by the end of the agreement.

This does not actually say what medications will be covered, for who and to what extent, nor does it even say that anything will actually be passed by the election. It is a triumph of rhetoric over substance.

The same is true of this:

Recognizing that health systems have been stretched because of COVID, the parties realize that additional ongoing investments will be needed in the immediate future to address these pressures. We will work with the provinces and territories to determine how together we can deliver better health outcomes for Canadians, including more primary care doctors and nurses, mental health support, aging at home, and better data.

There is a whole lot of nothing that is not incredibly vague going on there.

Many of the other planks are equally meaningless with lots and lots of wiggle room to claim to have achieved them even if nothing of any kind has seriously been done.

Implementing a Homebuyer’s Bill of Rights and tackling the financialization of the housing market by the end of 2023.

What does that mean? Who knows. It is certainly not a serious attempt to address the housing crisis and nothing else proposed is either.

The NDP does not even seem have gotten the Liberals to agree to a tax on the “super rich” that they babbled on about in the last election.

All of the proposals are like this. We could go through them, but why bother. You can read them for yourself and bask in the glow of bright-eyed and bushy-tailed bullshit.

Even worse, the NDP has apparently made it clear it will back increased military spending. The Globe and Mail reported this and Trudeau today (March 24) said that “a deal he reached with the opposition New Democratic Party (NDP) earlier this week, in which he agreed to back more social spending in exchange for NDP support in parliament until 2025, will not affect defense spending plans.” This is not really a shock either though. Despite some silly commentators describing the NDP as “pacifist” they are nothing of the sort and have been calling for new military jets and other war toys for years now.

There is nothing surprising about this agreement and its ideological nature at all. This kind of “progressivism” is the NDP and has been both provincially and federally for a very long time. Layton’s coalition agreement (which was at least mildly more ambitious than this) and Mulcair running to the right of the Liberals in 2015 in a bid for power are just two cases. There are endless provincial ones, including the Ontario NDP backing two minority provincial Liberal austerity budgets in 2012 and 2013 only to bring down the Liberals for a relatively progressive budget in 2014 leading to a Liberal majority election win.

This is the NDP’s kind of trademarked drivel. A nauseating pablum of pledges that either never happen or were not really that great in the first place. Dexter, Notley, Horgan are all part of a long line of the NDP actually winning outright only to shift right and peddle the exact same claptrap.

In other words, this coalition agreement is totally on brand for the NDP, to use a term that perfectly embodies the empty-headed, performative bourgeois politics of this era.

But none of this is, or at least should be, news to leftists either outside of the NDP or its Quixotic “change from within” types who cling to their party membership badge insisting that the NDP is still the “party of labour” in a way just as silly as calling the Republicans the “party of Lincoln”.

Many of them seem to see this new agreement/coalition as a kind of great betrayal or even, somehow, the “death” of the NDP as if it is an unprecedented or new ideological step. It is neither. If this is the death of the NDP then they were stillborn as far back as 1972.

No one need endorse the deal — why would any leftist “endorse” this deal? — to understand it as totally logical and perfectly consistent with what the NDP has been for a very long time and its parliamentarianism. The NDP crossing any mythical Rubicon away from socialism and towards a liberal version of “social democracy” happened many decades ago.

While the faithful, including some likely well-intentioned lefties, will say “Liberal-Tory same old story” every election when insisting the NDP is on the verge of delivering the New Jerusalem if only people would “give them a chance”, this is not, in practice, how the NDP leadership feels or works at all.

The coalition agreement and previous attempted ones — as well as previous minority parliaments — show quite clearly that if the Liberals and the Tories are the same old story the NDP seems to like to read from the one book much more than the other. As, of course, they would.

Last August in the piece After 60 years those embracing class struggle should move on from the NDP I argued that:

Leftists in Canada should be hoping either for the end to the NDP, for the NDP to finally merge with the Liberal Party it so desperately wants to replace or we should simply admit what it is and leave it to the right wing social democrat careerists who run it and always will.

Trying to shift it left is a proven failure and an obviously disastrous detour that has derailed the Canadian left for decades and belongs in the dustbin of history as a “strategy”. It is a decades long strategy of defeat and ultimately just provides left cover to get reactionaries like John Horgan in BC and Rachel Notley in Alberta elected.

There is no greater hinderance to the creation of a real socialist movement in Canada than the NDP and no greater albatross around the necks of Canadian socialists. That every single attempt to shift the party left has failed and failed easily should provide all the proof needed.

Nothing has changed since then and seen in that context and in the context of “progressive” Canadian politics this agreement/coalition is exactly what one would expect. The deal makes total sense in the ideological present of these two parties which are really not that different from each other anymore — insofar as they ever were — other than in their internal cultures and founding myths.

The problem — and it is a problem — with framing what the NDP has done in the terms that some leftists have is that it continues to portray the NDP as a “left” political project and vehicle that could, theoretically, be somehow redeemed and made into a “real socialist party” or some such thing.

This is simply not true and has not been true for a very long time. A serious left analysis of this move by the NDP will see it as just another confirmation that for anti-capitalist leftists the time to build new movements and electoral structures outside the NDP is long, critically overdue.

So long overdue, in fact, that it is perhaps understandable that people still feel betrayed by what must appear to them the only “left” game in town, the party that has been nothing but a terrible albatross around the neck of Canadian socialism.

While it is much easier to say this than to do it, the Left in Canada must shed the NDP albatross once and for all and shed any lingering idealization of the party that makes some see “betrayal” in what is simply par-for-the-course.

See also: The Left Chapter: Fifty years later it is time to acknowledge the Waffle was wrong

Review: ‘Don’t Look Up’ – don’t leave it to the liberals to save us