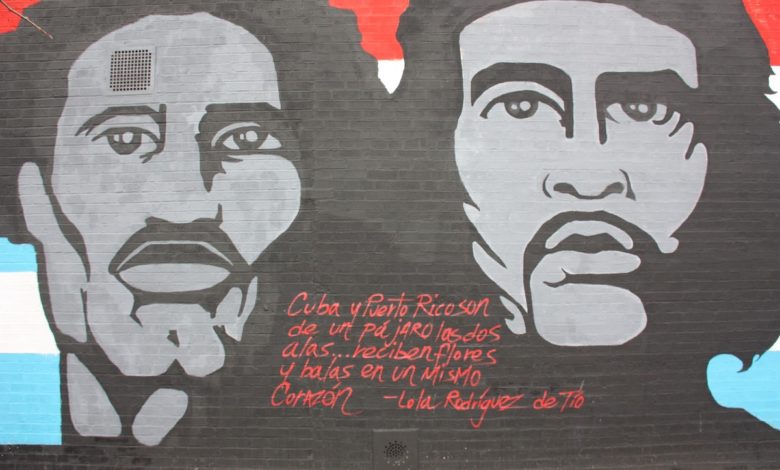 Over the last couple of weeks, community activists with the Party for Socialism and Liberation, the Justice Center en El Barrio, East Harlem Preservation, and signees of a list of over 40 endorsing organizations and individuals, have been gathering hundreds of in-person petition signatures to defend the Dos Alas mural in the East Harlem (El Barrio) neighborhood of New York City. The mural was vandalized by rightwingers.

The groups mobilized the petition effort in response to recent right-wing campaigns against organizations, artists, and individuals associated with uplifting revolutionary Cuba. In particular, the Dos Alas mural has been under attack by members of the Artists Making Changes Foundation—an organization which advocates for U.S. intervention in Cuba. On Aug. 14, the mural was vandalized and restored immediately afterward by Puerto Rican activists, leaders, and friends. This week, an online version of the petition was launched.

A beloved neighborhood symbol of solidarity

The Dos Alas mural stands in its glory in the predominantly African American, Puerto Rican, and immigrant neighborhood of East Harlem on 105th St. and 3rd Ave. The mural spans roughly 40 feet and depicts the faces of revolutionaries Don Pedro Albizo Campos and Che Guevara with the flags of Puerto Rico and Cuba, and is seen symbol of anti-colonial and anti-imperialist struggle in the community.

Dos alas (Two Wings) means that Puerto Rico and Cuba are not separate from each other. They are two wings of the same bird. Dos alas is a poetic metaphor for the two Caribbean island nations’ common history of U.S. intervention, colonialism and resistance, as well as shared inspiration and solidarity in fighting back against U.S. domination.  The expression ‘dos alas’ was coined by Puerto Rican poet Lola Rodríguez de Tió in her 1893 poem “Cuba.”

Cuba and Puerto Rico are
As two wings of the same bird,
They receive flowers and bullets
Into the same heart …

Originally, “Dos Alas” was one of ten murals in the neighborhood celebrating Puerto Rican and Latin American history. It is now the only remaining one, with the other nine now gone due to gentrification forces in the area.

Vagabond Alexander Beaumont, the artist who made the mural, stated in a Facebook post, “The mural was originally painted in 1997 and restored in 2012… Next year the mural would be 25 years old… It’s the only surviving mural of several that I designed, helped organize with the PRC (Puerto Rico Collective) and painted in 1997… Among the murals we lost were the Los Macheteros mural on the NW corner of 110th St. and Park Avenue, the Puerto Rican political prisoners mural on the SE corners of 104th St. and Park Avenue and the Lolita Lebron mural on the north side of 107th St between Lexington and 3rd Aves.”

Many leaders, activists, organizers in East Harlem have signed onto the petition to protect the mural, with some expressing appreciation of public art more generally and others overtly endorsing its revolutionary political message.

You can sign the online version of the petition here.

The following organizations and individuals are among those who have signed on in support of this campaign to protect the Dos Alas mural: