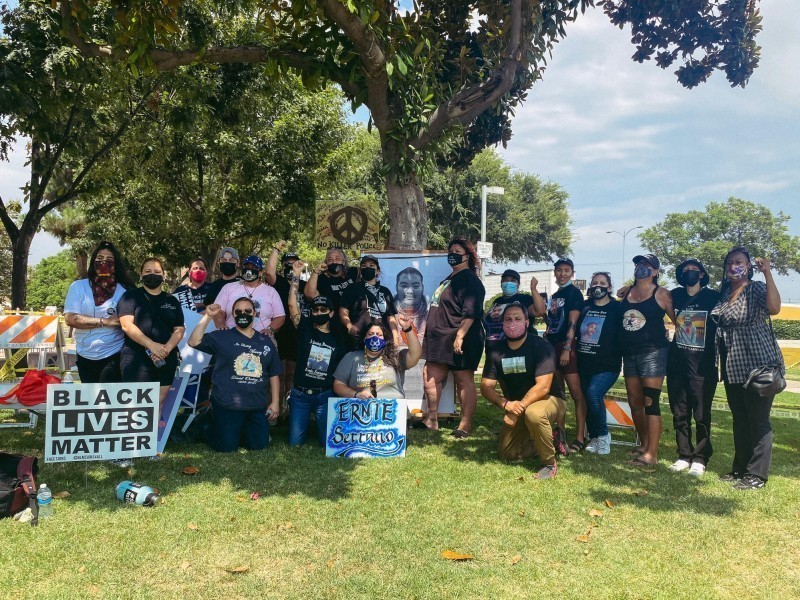 East Los Angeles, CA – The family of Anthony Daniel Vargas held a teach-in outside of the East LA Sheriff’s Station on August 14 to commemorate his three-year angelversary. The Vargas family not only honored Anthony, who was murdered by sheriff’s deputies Nikolis Perez and Jonathan Rojas on August 12, 2018, but also used the event to educate about the history of deputy gangs like the Bandidos and the ongoing violence the Los Angeles Sheriff’s Department (LASD) perpetuates in East LA. Around a dozen families and friends of loved ones killed by police from across Southern California as well as allied organizations like Black Lives Matter-Los Angeles and Centro CSO spoke in support.

Anthony’s mother, Lisa Vargas, and his aunts, Stephanie Luna and Valerie Vargas, facilitated the teach-in, explaining to the community the circumstances of his murder and the type of young man he was. Vargas was 21 years old, loved to fish, and led a bible study. The family also wanted to highlight the harassment that they experience, a form of political repression, since they’ve begun fighting back to win justice for their loved one. Other families of LASD victims, like Paul Rea’s, have similarly been harassed by deputies.

On August 12, 2018, sheriff’s deputies Nikolis Perez and Jonathan Rojas killed Anthony Vargas at the Maravilla Housing Projects in East Los Angeles. While responding to a call for a robbery at a nearby grocery store, Perez and Rojas encountered Vargas, who fled. A leaked autopsy revealed that the two deputies shot Vargas a total of 13 times in the back, back of the head, and back of his right arm. Former Los Angeles District Attorney Jackie Lacey refused to file charges just like in the hundreds of other cases.

The Vargas family emphasized that Perez and Rojas were prospects for the Banditos deputy gang. Described as “cliques” by the rogue Sheriff Alex Villanueva, these deputy gangs have spread throughout the different stations of LASD and the initiation of prospects require shootings in order for deputies to join. Thus, Vargas’ murder was a form of initiation for Perez and Rojas. Perez would go on to kill another young Chicano, Jorge Serrano, Jr., in 2019.

The friends and relatives of Vanessa Marquez, Marco Vazquez, Jr., Paul Rea, Ernie Serrano, Daniel Hernandez, John Horton, David Ordaz Jr., David Sullivan, Christopher Okamoto, and Cesar Rodriguez attended and spoke in solidarity. Christian Contreras, a lawyer from Justice X who represents the Vargas family, explained the history of sheriff violence including the assassination of Ruben Salazar at the August 29, 1970 Chicano Moratorium and the development of deputy gangs. Carlos Montes of Centro CSO talked about the history of Black and Chicano unity and solidarity and invited attendees to march and rally at the 51st Chicanx Moratorium on August 29. Baba Akili of Black Lives Matter-LA spoke about the impact of families’ testimonies and described the families’ growth since joining the struggle and ended his talk by saying we will see you all on August 29 at the Chicano Moratorium.

The East LA Sheriffs have a long history of brutality and killing of Chicano young men. This August 29, the families and marchers will be denouncing Sheriff Villanueva and the killer sheriff gangs for the 51st Chicanx Moratorium. The civil rights suit filed by the family of Vargas in 2019 will finally go to trial this September 23. The trial will be held in the U.S. Courthouse 350 West 1st Street, Los Angeles, CA 90012. The community is encouraged to attend and show solidarity with the family.