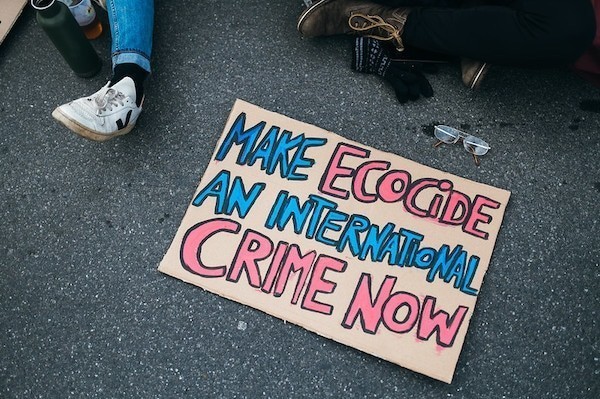 [published in Italian translation in Menelique (www.menelique.com), No. 6, November 2021; posted here with permission.]

Ecocide–the destruction of the entire ecosystem–is a real prospect. Its possibility has been well known to scientists since the 1980s, if not earlier. Every projection of its pace has under estimated the actual rate of breakdown.

It has been widely known since 2015 that the petroleum companies were informed by their own scientists, in the 1970s, that the combustion of fossil fuels would lead to global warming. However, not only did they continue to expand oil production; they undertook a deliberate campaign–especially in the United States–to discredit climate science in the public imagination.

Capitalist ecocide is thus not simply a matter of negligence; it is the result of a criminal disposition–one which, true to capitalist form, consciously subordinates the wellbeing of humanity and nature to the dictates of profit.

At present, the signs of breakdown have already attained calamitous proportions. New records of high temperatures are set every year. The associated droughts and forest fires further escalate the speed at which carbon dioxide is spewed into the atmosphere and at which biodiversity is broken down. Glaciers are melting, sea levels are rising, oceans are warming, storms are intensifying, and marine life is now threatened not only by pollution and over-fishing, but also by suffocation from de-oxygenation of the waters (climateandcapitalism.com). Meanwhile, tropical forests are in some cases (as in Brazil) being deliberately destroyed, while in others they are subject to a “green-grabbing” process which expels the indigenous populations that have helped sustain them (www.ispionline.it).

Can private and corporate capital sponsor a solution to the crisis it has engendered? It is not even making a serious effort. That is why, as a matter of survival, we need a socialist framework informed by ecological awareness–that is, ecosocialism.

Perhaps the most common objection to socialism raised by those who understand the severity of the crisis, is that although a socialist framework may be desirable, we cannot afford to wait for the arrival of socialism before addressing the environmental threat.

It is true that the environmental danger requires immediate steps, and it’s true that we cannot immediately expect a socialist transformation. But it does not follow that the necessary near-term steps can be taken without being informed by an understanding that is at least implicitly socialist.

For example, Joe Biden has decreed that by 2030 at least half of all cars sold in the U.S. should be powered by electricity, but he has not proposed that the number of private cars should be reduced–as it could and should be–to a small fraction of its present level. Even if we suppose that the electricity to power the new cars is generated without using fossil fuels, there remains the problem that the total number of vehicles will, in the absence of restraint on “market forces,” tend to increase. This will in turn mean that more metal will have to be mined, and more green space will be paved over.

Consider also the fact that, not only for electric batteries but also for communications devices (and of course for weapons systems), there will be a continuing demand for rare metals (climateandcapitalism.com; www.conceptmanagement.co.uk), and that all additions to the total stock of needed metal (i.e., beyond what can be obtained from recycling) require mining processes that, much like fracking, are disastrous for natural water supplies–as for example in the case of gold (used in computer chips), for which toxic cyanide is driven deep into the ground to separate it from the rock in which it is found.

The assumption of a continuously rising energy demand also leads–given the limitations of solar and wind power–to advocacy of nuclear power, which, in addition to all its other costs and dangers, wastes a prodigious amount of water. (For a concise yet comprehensive analysis of nuclear power, taking into account its complete life-cycle and also the increasing risk of nuclear power plants being damaged by catastrophic climate events, see climateandcapitalism.com).

In short, it is not possible to escape the conclusion that even a limited reversal of the dangerous environmental trends requires that we drastically reduce economic activities that do not serve basic human needs.

Reducing economic activities is not part of the capitalist lexicon. To carry out such a reduction in a planned way–respecting human needs–is indeed possible only within a framework no longer driven by market-competition and accumulation. However, some of the local or immediate components of such an approach can be initiated at any time and, as they gain traction, can lay the foundations of the new culture that will have to come into being–across the whole of society–if the socialist approach is to take root.

One example of such initiatives is the planting of urban gardens. Another is the creation of farmers’ markets. Yet another is resistance to specific capitalist aggressions like the installation of oil pipelines. Community involvement requires educational steps, which can lead to radical rejection of a whole approach to defining economic priorities. A remarkable example of such a process unfolded recently in El Salvador, which, as the result of a long struggle of peasants against the destruction of their aquifers by a Canadian mining company, became “the first country of the world to ban all mining” (whowhatwhy.org).

Ultimately, it is indispensable to have a regime that dedicates itself to the protection of biodiversity. But the breadth of support mobilized by the Salvadoran peasants points to the thoroughness with which, if such a regime is to emerge, ecological awareness must already permeate the entire society, overcoming resistance that might previously have been considered insurmountable.

Once such a regime–grounded in ecosocialism–is in place, its strategy will depend on the particularities of any given society. But a population that has come to recognize the priority of biodiversity over expanded manufacture will be prepared to engage in the kinds of discussion that will be needed in order to determine which sectors of economic activity (including services) will need to be retained or expanded and which ones will need to diminished or phased out entirely.

The guiding principle for such deliberation will be the extent to which a given activity responds to some basic human need (whether physical or psychological), as opposed to being of service simply to advancing the interests of capital–e.g., through excess production, sales-promotion, financial speculation, environmentally harmful technologies, or, most especially, the maintenance of a vast enforcement apparatus charged with protecting the global interests of the capitalist class. (For fuller discussion, see my 2001 article “Toward Ecological Socialism” [www.researchgate.net], reprinted in my book Red-Green Revolution: The Politics and Technology of Ecosocialism [Toronto: Political Animal Press, 2018].)

A regime that can elicit and enforce this basic distinction offers the only hope for holding back the forces that threaten our common survival.

United States: 2021 perspectives for revolutionary socialism in the US

Tragedy in the Channel: Socialism or barbarism

63rd Anniversary of the Cuban Revolution: Socialism is superior to capitalism!

Socialism Against the Siege