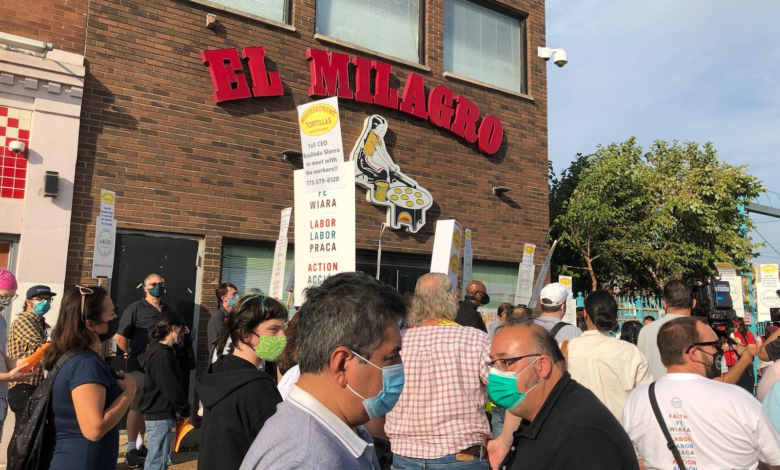 On September 30, workers at El Milagro Tortillas in Chicago were joined by community members and elected officials for a rally calling on the company to stop its mistreatment of workers. The rally followed a work stoppage the week before where El Milagro factory workers, in coordination with Arise Chicago, held a picket and press conference outside one of the company’s stores to publicly list their grievances.

Workers at the tortilla factory have stated they are forced to work sometimes seven days a week in unsafe conditions, are not paid a living wage, and are subjected to a workplace rife with sexual harassment. Machinery has been sped up to levels that place workers in danger of serious injury, and workers toil away in excessive heat inside the factories. During the pandemic, El Milagro workers were not provided with proper personal protective equipment (PPE), resulting in widespread transmission of COVID-19 which caused the deaths of at least 5 workers.

In response, workers are demanding safe workplace conditions, higher pay along with a wage scale based on seniority, and an end to sexual harassment. At the rally, workers held placards referring to El Milagro Tortillas as “El Maltrato [Mistreatment] Tortillas”, and filled the air with chants like, “the people united will never be defeated!,” and “Milagro, escucha, estamos en la lucha!” [Milagro, listen, we are in the struggle!].

The workers have been organizing with Arise Chicago, a worker center, and have formed a workers’ committee. Though not a union, this committee qualifies as a labor organization under the National Labor Relations Act.

During their initial walkout, workers gave CEO Raulinda Sierra one week to meet with them and discuss their grievances. Management did not even respond to this request. Instead, the bosses chose to hire armed security at one of their factories and send intimidating letters to workers threatening them with termination for organizing. In the face of these attacks on their right to organize, workers mobilized once more and filed a formal complaint with the National Labor Relations Board.

El Milagro is a popular tortilla manufacturer with hundreds of employees throughout Illinois, as well as in other states. In recent days, consumers have noted a nationwide shortage of El Milagro products. Management blamed the absence of tortillas in stores on COVID-19 related supply shortages. However, workers and organizers at Arise state the real reason is that, “El Milagro pays such low wages and forces workers to work under such harsh working conditions that they can’t find more workers willing to work for them.”

In addition, many workers at El Milagro are undocumented, which heightens the risk in this type of organizing. El Milagro management cynically exploits the immigration status of workers to keep wages low, workplace conditions poor, and workers intimidated. However, workers have continued organizing, and despite the bosses’ repressive measures show no sign of slowing down.

Alfredo Martinez, an El Milagro worker, told Liberation News that he is motivated to fight by the “excess of work we have that is beating us down physically and mentally.” Martinez stressed that these brutal conditions can only come to an end through “people doing something about it.”

The workers’ rallies have taken place outside one of the company’s stores in the heart of Chicago’s Little Village neighborhood. Little Village is home to a vibrant working class community, of whom 83% are Latino. Across the street from the store stands the Discount Mall, a bustling community hub filled with immigrant vendors that has recently been purchased by a large development company seeking to convert the mall into a big-box store.

Little Village has also been home to many popular struggles in recent times, including those against gentrification and police terror. Protests have taken place at the Cook County Jail, located in Little Village, in response to hazardous conditions during the pandemic. Mass outrage and protest was also sparked after 13-year-old Adam Toledo was murdered by a Chicago police officer in Little Village in March of this year.

The ongoing fight being waged by the workers at El Milagro is part of this broader fabric of struggle. Community members have turned out in force to support the workers by rallying with them, honking horns as they drive past, and spreading the word on social media. With El Milagro tortillas being a common household staple across the city, the community is echoing the demands of the workers: “We don’t want to buy tortillas made in sweatshops!”

As workers continue to organize, it is clear that they have the community standing shoulder-to-shoulder with them. The cowardly intimidation tactics of the bosses will be resisted by the combined power of workers determined to fight for their rights, and a neighborhood fed up with exploitation and mistreatment.

You can support El Milagro workers by signing the petition being circulated by Arise Chicago here.

The case of the vanishing boss