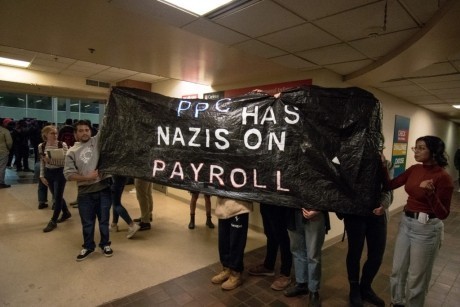 Recently a very politically astute friend admitted to me that no matter how she tried, she could not put herself in the mindset of anti-vaccine/anti-mask protesters. All I can say, Dear Diary, is that proves she is a decent human being.

A search for the motives of people who block hospitals, who verbally and physically assault people seeking care and embattled healthcare workers, in the midst of a pandemic is like opening the proverbial can of worms. Lots of unpleasantness wiggling around in there.

My friend wondered what those hospital blockers sought to gain. Why did they think it was a good idea? And why did so many answer the call?

The answer does not begin or end with the People’s Party of Canada, but they are certainly part of the equation. This election, if a PPC candidate or volunteer knocks on your door, it may be fascism that comes knocking.

Disturbingly the PPC is polling at 5% or more – ahead of the beleaguered Greens. If that translates into votes, the PPC will register more than a million supporters.

Much of that support has come as the PPC opportunistically puts itself at the head of the anti-vax movement. Party leader Maxime Bernier has been the lead speaker at anti-vaxx/anti-mask rallies across the country. In June he was arrested in Manitoba for flaunting public health regulations.

His time in jail was woefully short – a few hours in detention before posting a measly $1000 bond – but that has not prevented him from boasting of his outlaw status at subsequent Party events.

A campaign video shows Bernier addressing a large crowd (all unmasked, predominantly middle-aged and virtually all white) declaring that he is willing to go back to jail in the name of “liberty”. He intones: “When tyranny becomes law, revolution becomes our duty.” The quote is attributed to Thomas Jefferson, but more recently adopted as a slogan for the Qanon-inspired, pro-Trump militia movement in the US.

The many similarities with the pro-Trump, insurrectionist movement are not accidental. The party campaign video features a zoom-to-closeup shot of a circular microphone that resembles a “Q”. A combination dog-whistle and eye-wink,

The crowd responds with chants of “Freedom, Freedom!”

Not all of these people are outright white supremacists and anti-Semites, but adherence to the party’s libertarian ultra-individualism creates a scummy pond in which white nationalists can identify and recruit likely supporters. Where the PPC is cynically and opportunistically using the anti-vaxx sentiment to advance its interests, fascists are cynically and opportunistically using the PPC to advance theirs.

In London ON, a PPC led mob not only threw gravel at Justin Trudeau, they were photographed harassing people who came out to greet the Prime Minister. A 17-year-old woman and her grandmother were threatened and spat upon by the same individual who led the stone throwing. With its usual efficiency, social media soon revealed that the alleged assailant was Shane Marshall, campaign manager for Elgin-Middlesex-London PPC candidate Chelsea Hillier.

Marshall has a long record of supporting and amplifying white supremacist causes and groups. It is hard to believe that Hillier and PPC leaders were not aware of Marshall’s fascist leanings when he became their riding association president.

Marshall, like Hillier, and her father Randy Hillier, has been a fixture at anti-vaxx rallies around southern Ontario. You might recall, Dear Diary, that Randy Hillier is an Ontario MPP who is so rancorously right-wing he was kicked out of Doug Ford’s Tory caucus, and now sits as an independent.

Marshall and others like him that are the connective tissue between the PPC and white supremacist organizations. PPC leader Bernier and anti-vaxx celebrity creep Chris “Sky” have both been featured guests on Plaid Army youtube channel, part of a network of far-right, anti-Semitic provocateurs.

The hospital blockades have been organized and endorsed by “Canadian Frontline Nurses”. CFN has been denounced by the Canadian Federation of Nurses, and mostly consists of 2 Ontario nurses who were fired for their anti-mask/anti-vaxx organizing. Sarah Choujjounian and Kristen Nagel actually met getting on a plane to Washington DC, to participate in the January 6th far-right rallies and insurrection. Within days of their return they created CFN, a bogus but real-sounding organization meant to give credibility to the hospital rallies.

They have become anti-vaxx, conspiracy theory celebrities on both sides of the border.

Diary, you well know that my mother and sister both had important careers in nursing and public health, and the idea that they are even tangentially connected to scum like Nagel and Choujounian enrages me. I hate to admit it – nurses can be fascists too.

To sum up: the anti-vaxx hospital rallies are jointly organized and promoted by a dog’s breakfast of PPC opportunists and far-right creeps. They are able to target hospitals – something that I would have said was impossible a year ago – by taking advantage of anti-science conspiracy theories, of Qanon sentiments oozing up across the border. Masks and vaccine mandates are “medical tyranny”. Public health equals tyranny.

Remember that the nursing profession, like education, has been subject to a decades long attack on working conditions and reputation.

These rallies get a shot in the arm – forgive me Diary – from the evident sympathy and passive support they receive from “authority figures” like cops and firefighters, professions famously riddled with sexism, homophobia and racism.

For the PPC it will mean more votes. For the far-right it will be an opportunity to mobilize a small but significant army of thugs who have no hesitation to shove around people with medical emergencies, cancer patients, hospital workers, nurses and doctors. Today hospitals – tomorrow synagogues and mosques?

There are millions of people in this country who feel betrayed and deserted by a failing system, who may be open to an unabashed call for revolution. It is criminal that the only such call on offer is from Maxime Bernier, representing a dangerous lurch to the right.

None of these outcomes are automatic. They require a passive response from the left, particularly labour unions. If labour is too focused on electoralism to organize to face this right-wing movement in the streets, fascism may gain a dangerous toehold in Canadian politics.