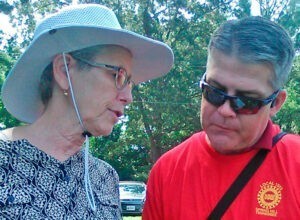 The Socialist Workers Party points to Cuba’s socialist revolution as an example for working people to study and emulate. It shows the road forward for workers and farmers everywhere to organize in our millions to take political power into our own hands and end the immoral brutality of dog-eat-dog capitalism once and for all.

This is the reason the U.S. capitalist rulers’ government organizes and funds counterrevolutionary groups in Cuba, part of its unceasing efforts to overturn the Cuban government and reimpose capitalist exploitation. President Joseph Biden’s administration has tightened Washington’s decadeslong economic and political war aimed at starving the Cuban people into submission.

The U.S. rulers will continue this offensive as the social and economic crisis of capitalism deepens here, leading workers to use and strengthen our unions to defend our wages, conditions and rights, and to aid all those who fight against the exploitation and oppression inherent in capitalist rule. You can see this unfolding in strike battles across the country today.

“What Cuba gives to the peoples,” Fidel Castro said in 1962, “is its example.” It’s an example to millions of workers and farmers in the U.S. who reject being made to bear the brunt of capitalism’s worldwide crisis and the impact of its never-ending wars.

Led by Castro and the July 26 Movement, Cuba’s people showed what the working class is capable of accomplishing and what we can become.

They overturned capitalist rule and brought to power a workers and farmers government. Millions were organized to end capitalist property relations, by taking into their own hands the factories, plantations and banks, and reorganizing production to meet the needs of the toiling majority. At every step the revolutionary government relied on working people through their struggles, gaining confidence in their own capacities. It opened the door to deepening the fight to eradicate racism and to win women’s emancipation.

As they fought, workers and farmers increasingly recognized the socialist character of their accomplishments and the importance of the Marxist character of their leadership. In making a socialist revolution, they transformed themselves, becoming disciplined and class-conscious revolutionaries. Defending their conquests, they defeated a U.S.-backed invasion and have brought crucial internationalist solidarity to hard-fought struggles against imperialist exploitation ever since.

Che Guevara, one of the Cuban Revolution’s central political leaders, explained, “To build communism it is necessary, simultaneous with the new material foundations, to build the new man.” This is the potential of the working class everywhere.

Some 425,000 Cuban internationalist volunteers fought courageously to defeat the South African apartheid army’s invasion of Angola in the 1970s and ’80s. This great battle brought forward the end of apartheid’s hated regime — an “unparalleled contribution to African independence, freedom and justice,” in the words of Nelson Mandela.

The more working people in the U.S. understand about how Cuba’s socialist revolution was led to victory and why it has endured, the better prepared we will be to meet the challenges posed by the crisis of capitalism here.

Cuba’s socialist revolution: ‘No one is left on their own’

How Cuba’s working people made a socialist revolution