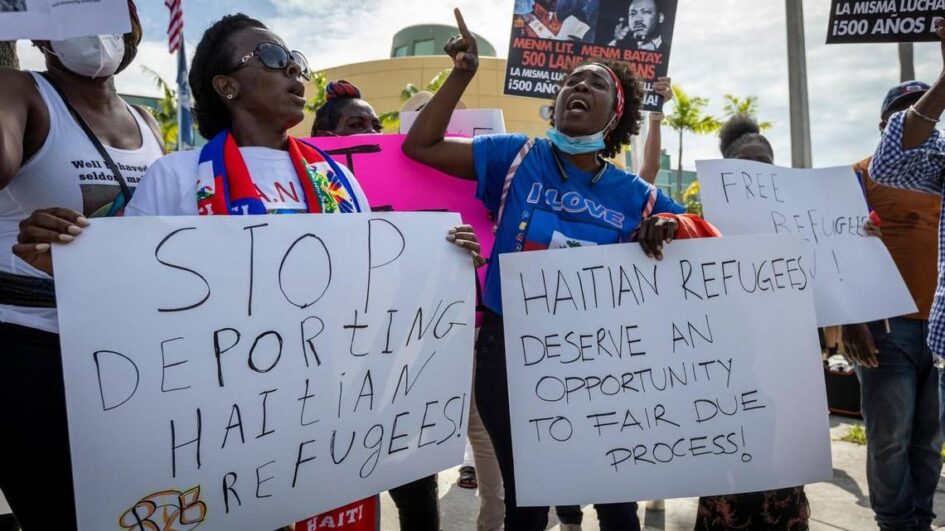 After images of the U.S. Border Patrol agents using long reins as whips against Haitians camped in Del Rio, Texas, trying to get into the U.S., spread worldwide, a top-level decision was made to shut the Del Rio camps down. Haitian migrants crossed the Rio Grande between Texas and Mexico with supplies Sept. 23 and spent the night under the international bridge connecting Del Rio and Ciudad Acuña.

Hundreds of progressive organizations condemned the Border Patrol’s actions — from the World Federation of Trade Unions, representing more than 105 million workers in 133 countries, to U.S. labor unions, to the NAACP’s local affiliates and celebrities of all stripes. News from Del Rio made the front page of Le Nouvelliste, Haiti’s major daily newspaper, and was prominently featured on all the YouTube and web chats Haitian-oriented social media use.

There have been scores of demonstrations throughout North America, calling on the U.S. and Canadian governments to stop expelling Haitians and accept their asylum claims. According to the AP, the U.S. only accepted 5% of Haitian asylum claims in 2020, the lowest rate for any national group. The Sept. 23 resignation of Special Envoy Daniel Foote really irritated the White House. Foote is a senior career foreign service officer, and this is the first time in over 30 years that one of this elite group resigned over his bourgeois “principles.”

Foote argued that the deportation policy was self-defeating as it would only fuel more migration. His explanation was: “The people of Haiti, mired in poverty, hostage to the terror, kidnappings, robberies and massacres of armed gangs and suffering under a corrupt government with gang alliances, simply cannot support the forced infusion of thousands of returned migrants lacking food, shelter and money without additional avoidable human tragedy.”

He was answered by Deputy Secretary of State Wendy Sherman, who said in a press conference on the issue that Foote had given a misleading version of the events leading to his resignation and had advocated military intervention.

The Department of Homeland Security said nearly 30,000 migrants had been encountered in Del Rio in the past two weeks, but none were left by Sept. 24. Around 2,000 were expelled to Haiti in nearly 400 flights.

While Haiti didn’t formally object to receiving them, the Haitian office of Immigration didn’t provide much help. Often refugees did not get all of the $100 that they were supposed to get — just $25 and a promise of more later. Sometimes the promised meals were missing. People were tested for COVID, but no plan was in place to quarantine anyone.

Le Nouvellistes ran a short piece Sept. 24 on how the people expelled on the flights had to struggle to get their passports back. A Haitian passport, according to their website, cost $125 — more than an average Haitian worker makes in a month.

One of the workers interviewed was Belone Mpembele, an Angolan who became friendly with some of the Haitians he worked with in Brazil. Mpembele decided to try to get into the U.S. with them. When he got picked up in Del Rio, U.S. immigration didn’t believe him when he said he was Angolan and had never lived in Haiti.

More than 12,000 migrants will have a chance to make their case for asylum before U.S. immigration judges. Many of the families have mixed citizenship, with at least one Haitian parent but the children being Brazilian, Chilean or Panamanian, depending on where they were born. The odds of a Haitian getting permission to stay are low.

An estimated 8,000 voluntarily returned to Mexico; some of them are hoping to get permission to work there. The rest were taken to ICE detention centers to be processed and learn their fate.

The U.S. establishment seems to believe that if they proclaim they are nasty and illegally reject refugees and asylum seekers, then all their immigration problems will be solved. But the United States has spent over 200 years inflicting pain and economic suffering on Haiti, and Haitians still keep coming.

Thomas Jefferson, the third U.S. president (1801 to 1809), set up an economic and political blockade of Haiti in 1804 that lasted until 1862. In 1915, just before the U.S. began a 19-year-long occupation of Haiti, a Marine brigade stole Haiti’s gold reserve and turned it over to CitiBank.

Economically, whenever the U.S. supplies financial, material, medical aid to Haiti, it demands Haiti undertake “reforms,” such as cutting the duties on U.S. subsidized rice so it can drive Haitian rice, and the farmers which grow it, out of business. Former President Bill Clinton apologized for this, but in 2009 when Hillary Clinton was Secretary of State and Haiti tried to raise its minimum wage to 61 cents an hour, roughly $5 a day, the U.S. forced Haiti to maintain their 24 cents an hour wage — less than $2 a day.

There have been whole books written on how, and why, the U.S. economically exploits Haiti, but until the U.S. stops, people are going to be pushed out of Haiti towards the U.S.