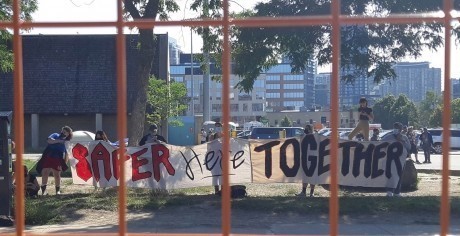 The vicious attacks by Toronto police on the encampments in city parks – with the support of a city council majority – is part of a long history of demonization and violence against people experiencing homelessness. It is not an aberration but a pattern. What has changed is the context. The people living in encampments are doing so because they have no other options and the pandemic means more and more people have been pushed onto the streets. All of this is happening after decades of skyrocketing rents and housing prices which give working people even fewer options.

The city justifies the attacks by saying that the encampments are not safe and that they are trying to get people into housing. They could solve those problems by putting some effort into increasing safety and building proper affordable housing but they are not doing either.

If, for example, the issue is fire safety – governments in cities around the world have solved this problem by having firefighters provide fire safety tips and fire extinguishers on site. That would solve the problem and would save a considerable amount of money. Having police and private security attack the camps is expensive and wasteful.

The city will also say that they are working to find housing for those in the camps. But what kind of housing are they proposing? Given the massive wait times for affordable housing, what they are really doing is pushing people into an already overcrowded and dangerous shelter system. During the pandemic there have been numerous outbreaks of covid in the shelters. The new hotel shelters are not much better and leave many people feeling that they are still in a state of institutional supervision.

And many of the housing options being offered are far away from the centre of the city in locations that have few services. This just means people will end up back in an encampment soon after being sent to housing.

There is also another equity issue at play. Many in the encampments are people who have experienced trauma – often at the hands of the system – and they are unwilling to be brought into a daily interaction with that very same system. Almost 40% of those in encampments are Indigenous people who have already suffered from the genocide meted out by the Canadian state. The fact that Toronto police are evicting them from their own land just ads insult to injury.

City arguments about needing the parks for children’s programs are bogus. Several days after Alexandria Park was violently cleared, the park was ringed with fences and security guards reserving the area for a film shoot. Money from the movie industry is higher priority than either homelessness or children.

It is absurd that this is the response from the city but it is logical when put into the framework of capitalism.

The capitalist system has no interest in solving the housing crisis. In fact, any long term solution that would provide adequate affordable housing puts the profits of the banks, developers and landlords in danger. Far from being a problem that politicians cannot solve – they are deliberately ensuring it will not be solved.

Doug Ford and John Tory and Justin Trudeau are in league with the capitalists who make money off of the housing crisis. They listen to them and not to us. That’s what is behind the opening of the Greenbelt to housing development or the removal of strong rent controls in most cities in Canada

But that doesn’t mean we cannot have change. Campaigns to defund police and have some of the money allocated to them used for affordable housing are growing around the world. The city of Toronto spends $1.2 billion on police each year. Half of that would be enough to provide housing – thus making the police who attack the encampments redundant.

But ultimately, if we want to permanently solve the housing crisis we need to overthrow the capitalist system that makes housing a commodity rather than a right.

Housing is a human right!