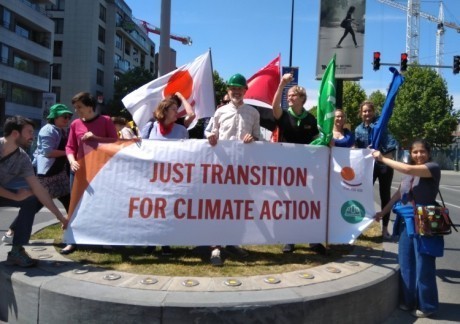 There is an image often presented of workers in fossil fuel extraction and processing industries as diehard supporters of these industries and the environmentally destructive methods they are paid to employ. The implication is that it’s a waste of effort to try to convince these workers that our economy needs to shift away from fossil fuels, and that our only hope is for enlightened political and business leadership that can solve the crisis and keep the economy afloat.

But we’ve been waiting for this leadership for 3 decades to go beyond talk to take real action and the wildfire smoke across the continent shows we can’t wait anymore. Thankfully this image of high carbon industry workers is a myth.

A new poll of workers with jobs in fossil fuel extraction and processing industries in Canada puts it to rest. Commissioned by worker-led non-profit group Iron & Earth in May, the results showed that workers in these industries have a lot of concerns about the future and are open to a transition away from fossil fuel industries. 67% of those polled agreed that climate change needed to be addressed; 69% are interested (39% very interested) in transitioning to the “net-zero” economy; 88% are interested in training in technologies for it.

Workers in these industries do have very serious concerns: 94% for the current and future economic well-being of their children (52% very concerned); 77% about environmental protection and conservation (30% very concerned) and 68% about action on climate change (27% very concerned). These numbers reveal that there is a great deal of interest in a transition to green jobs.

Under capitalism, owners and managers control the workplace from hiring to firing and everything in between. When the boss hires a worker, it is primarily because their labour will generate profit for them. Profits from fossil fuel extraction, processing and distribution form a key sector of capital accumulation in the economy. The portability of fossil fuels also provides greater flexibility and control to the boss compared to the fixed locality of zero-carbon energy production. There is a need for the government to intervene and provide a just transition plan, but a mass movement that includes fossil fuel workers will be needed to press for action.

Iron & Earth have launched a campaign proposing that the federal government invest $110 billion in what they call the Prosperous Transition Plan, to train workers for the “net-zero” economy, assist business and industry in the transition, retrofit and repurpose infrastructure and support and strengthen the earth’s ecosystems, carbon sinks and natural technologies. By building a campaign around this type of bold plan, it could concretize the key question of justice for workers whose livelihood currently relies on a carbon intensive industry but who want to transition to a green job.

Some elements of the Iron & Earth plan need to be challenged, such as including carbon capture and storage, biofuels and other elements as part of the “net-zero” economy, where sunk carbon is subtracted from carbon emissions to describe net carbon emitted. The problem is that “net-zero” allows governments and corporations to avoid reducing emissions in favour of carbon sink technological fixes that allow continued funding of the fossil fuel industry. This distraction becomes even more problematic every day, as the massive wildfires burning across Turtle Island and elsewhere around the world are releasing huge amounts of carbon that make actually reducing fossil fuel carbon emissions even more urgent.