Engineering disaster and the legacy of colonialism in Pakistan’s floods 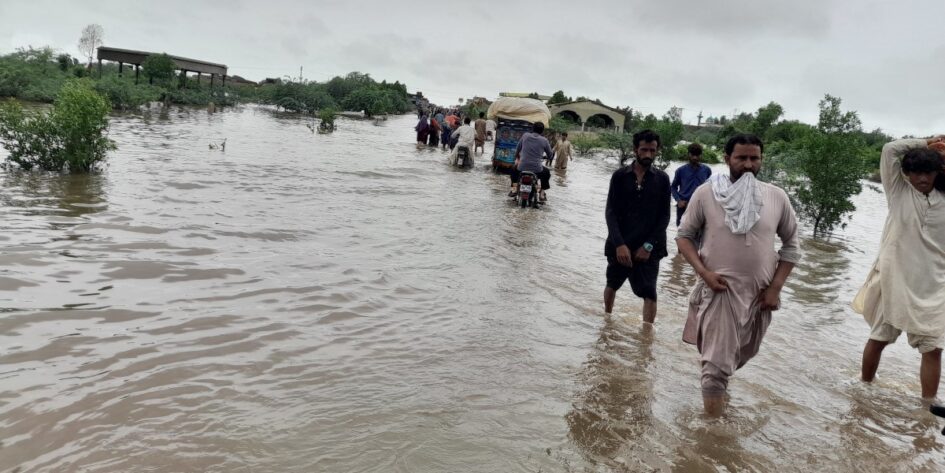 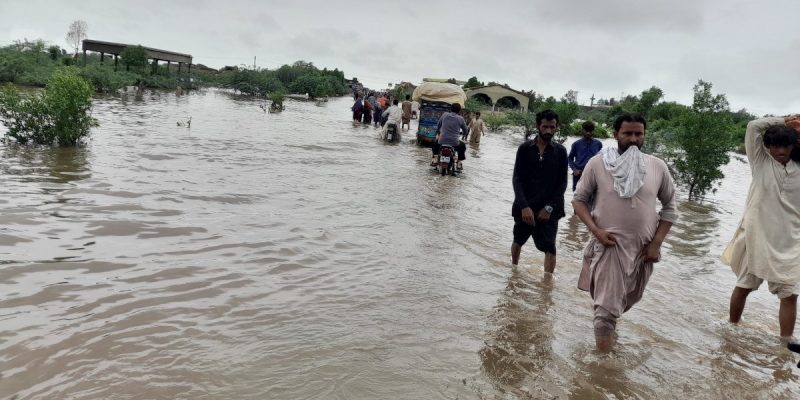 In Pakistan, many mainstream politicians, activists and journalists blame the global north for 2022’s devastating floods. The north contributes 92 per cent of excess global carbon emissions. Yet it is countries like Pakistan, which contributes less than one per cent, that are on the frontline of global warming’s effects.

In addition to a global-north induced climate crisis, the scale of Pakistan’s floods has been exacerbated by hydrological infrastructures built over centuries by western imperialism and allied local elites. For empire’s drivers and beneficiaries, controlling rivers – and the people and ecologies around them – was a way to secure hegemony and profit. Hydrology – the scientific study and management of water – became a colonial counter-insurgency strategy, which would later be adopted by the post-colonial state and its imperialist patrons. Colonially-inherited hydrological infrastructures have ultimately left Pakistan’s poor more vulnerable to flooding and other effects of climate change.

When the British first annexed south Punjabi districts such as Dera Ghazi Khan in 1849, an epicentre of this summer’s flooding, they encountered several transhumant pastoralist tribes. Tribes would seasonally migrate between the hills, where they engaged in pastoralism, and the plains, where they farmed on alluvial land irrigated by hill torrents and inundation canals. This pattern of seasonal migration reflected a local ecology where flooding was periodic. Even the homes and villages people built were designed to be disassembled and reassembled quickly. For instance, when flood water approached Dera Ghazi Khan in 1819 (before annexation), locals easily moved villages four miles away from the river.

But these tribes’ seasonal migrations, combined with their combativeness, posed a threat to British security and profit-making ambitions. To solve both, the British, in collaboration with local elites, built a system of perennial irrigation and settled farming on the Indus basin over the 19th and 20th centuries – a process historian Neeladri Bhattacharya describes as the invention of ‘the agrarian’. Perennial irrigation and settled agriculture provided the British and local elites profits through land revenues and the export of cash crops such as sugar, indigo and cotton. It also facilitated British surveillance of the pastoralists-turned-peasantry, a concern that became especially acute after the 1917 Russian revolution and western fears of this ‘Russian menace’ spreading elsewhere.

However, British-led settlement meant that when the floods did hit, as they periodically would, villagers had nowhere else to go and no other source of livelihood. In 1857, when floods struck again, entire villages, cattle and crops were washed away in places such as Dera Ghazi Khan, even though the Indus river was three miles west.

In exposing villagers and agricultural land to flooding, permanent settlement also ironically threatened to undermine the profiteering objectives that led the British empire and local elites to settle populations in the first place. Thus, following the 1857 floods, the British built a series of close embankments to prevent future flooding and protect revenue streams, inaugurating an imperial approach to river and flood management that ignored local epistemologies and elevated hydrological science – what historian Benjamin Weil calls the ‘engineering paradigm’.

These embankments, as Weil explained, actually exacerbated the effects of floods. Built close to rivers, they forced them to carry sediment further downstream, not only devastating the alluvial farming upon which locals had depended on for centuries but also undermining the rivers’ own natural ability to raise their beds and hinder flooding. So when waters breached the close embankments – which happened in 1882, and again in 1888 – the damage was often far worse than prior to the construction of embankments. Indeed, the main town in Dera Ghazi Khan had to be relocated and rebuilt because of flood damage, with the new one founded in 1911.

The dominance of this engineering paradigm continued in the post-colonial period. In 2022, it’s still in effect.

From the 1950s, Pakistan’s political elites, in collaboration with western firms, started expanding the Indus basin’s irrigation and hydropower infrastructure, building a series of dams, barrages, canals and link canals. In 1958, the Pakistani state oversaw the construction of the Taunsa barrage, while in the 1960s, it developed the Mangla and Tarbela dams, the former with the support of British and American engineering and construction firms, the latter with Italian and French ones. Flood protection infrastructure such as spillways was also built to carry surplus water, though landlords often used their influence to direct construction in ways that protected their land at the expense of smaller peasants.

Much like the US-led agricultural modernisation programme known as the ‘green revolution’, the US New Deal-inspired hydraulic ‘blue revolution’ sought to combat the threat of a ‘red’ one

Though this infrastructure building only worsened flood vulnerability, it was pursued because it met several counter-insurgency and economic objectives. Local landlords protected their land, western firms acquired lucrative contracts, and the US government promoted a ‘modernisation’ development model that could secure debt dependency in global south countries such as Pakistan and offset Soviet influence in the cold war.

As anthropologist Maira Hayat shows, in developing the Indus basin, the US took inspiration from the Tennessee Valley Authority (TVA), a development agency established in 1933 as part of Franklin D Roosevelt’s New Deal, itself aimed at protecting capitalism and countervailing the spectre of communism amidst the great depression. Much like the US-led agricultural modernisation programme in South Asia, known as the ‘green revolution’, this TVA-inspired hydraulic ‘blue revolution’ sought to combat the threat of a ‘red’ one. During the 1970s, places such as Dera Ghazi Khan were the site of major communist-led peasant movements for land, which were undermined through these modernisation initiatives, as well as by local elites mobilising a paramilitary apparatus (the border military police) originally handed to them by the British empire.

Throughout the 2000s and 2010s, successive Pakistani governments have never questioned these hydrological infrastructures – if anything, they have expanded them. The country’s elites have continued to construct dams and drainage systems, as well as extend perennial irrigation along the Indus basin with projects such as the Greater Thal and Kachhi canals.

Typically supported by foreign technocratic expertise and financing, these mega-projects have often dispossessed ethnically marginalised groups and exacerbated flooding. The 2010 floods, for instance, were blamed on the faulty World Bank-led repair of the Taunsa barrage, whose initial construction also displaced local Siraiki ethnic groups in the peripheral South Punjab region. These mega-projects continue to be built, however, because of an engineering paradigm shaped by colonial hydraulic interventions and now cemented as a commonsensical approach for the pursuit of elite hegemony.

Yet hydrology as counter-insurgency has always had its insurgent foe, from nomadic tribes evading settlement in the mid-19th century to peasants occupying land in the mid-20th and ethno-nationalist movements combating displacement in the 21st. More recently, we have also seen calls for climate reparations. But reparations can be (and have been) folded into a reformist, counter-insurgent logic. To avoid that, we need to understand reparations, following philosopher Olúfẹ́mi Táíwò, as not an end in themselves but part of a much larger project oriented ultimately towards remaking the world.

This article first appeared in issue #238, Winter 2022, Deluge and Drought. Subscribe today to get your magazine delivered hot off the press!

Pakistan: How the Sindh Workers’ Alliance reacted to the flood disaster

The California floods and the climate crisis