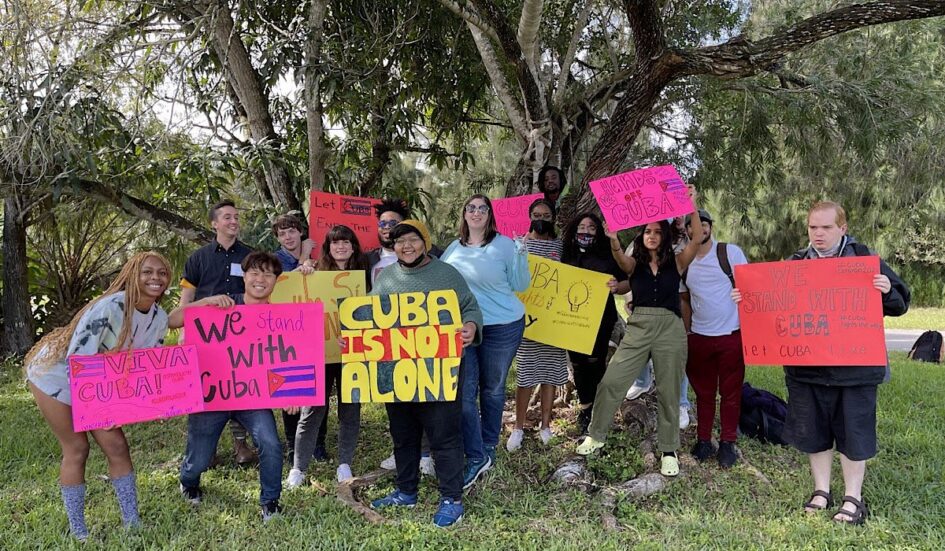 Buenas, if you are reading this and don’t know me, my name is Salifu. I am a member of the AAPRP, the Black Alliance for Peace and the Lowcountry Action Committee in Charleston, SC. This is my diary in Cuba.

By the time I publish this, me and 75 other people are boarding a plane headed to Havana. On the flight with us are over two tons of medical supplies to be donated directly to the Cuban government. But the medical supplies are not what is bringing us to Cuba. As Gail Walker, the director of our delegation, has explained to us, “Cuba does not need charity and this is not a charity trip. Cuba can take care of itself.” What Cuba needs is an immediate end to the blockade which has been suffocating its people at the hands of the US, since 1962. The purpose of this blockade is to make life unbearable for the people of the island, who, in 1959 created a successful revolutionary project that freed themselves from the control of the United States. IFCO/Pastors for Peace has brought us here as a testament to the fact that the overwhelming majority of the people living within the borders of the US do not support the genocidal blockade. And after getting to know the rest of my fellow caravanistas over the course of a 3-day orientation, I can say that the vast majority of us are here because we want to study Cuban society with hopes that sooner than later, we will be able to build our own.

We have spent the past three days in an undisclosed location in Miami, a city that has both a cooperative and antagonistic history with the Cuban revolution. In recent years, the power and influence of white Miami Cubans who wish to see the work of the revolution undone has grown, and Miami has become a breeding ground for anti-communist, reactionary activity. Across the city, reaching over into the island, people are preparing to engage in CIA-backed counter-revolutionary protests and activities all aimed at trying to convince the world, and the Cuban people themselves, that Cuba’s revolutionary project has failed and should be abandoned. As you can imagine, this presented somewhat of a challenge to the safety of my brigade. For those of us flying into Miami, we were encouraged not to wear shirts with explicitly political imagery (like a Che Guevera shirt lol). As I was packing I had to remember to remove my Fidel Castro pin from my backpack. We were bused from the airport to a safehouse provided to us by Cuban people and other Latin American friends of the Cuban Revolution living in Miami. We have been discouraged from using our phones too much and from posting to social media at all until we depart for Cuba in order to keep our location secure. This was not only about our safety but also the safety of the comrades who have provided us food and shelter here. The location needs to remain secure for future delegations and good-natured organizing for years to come, and the people who run it deserve to be safe after our departure. There is so much negative news to consume about the evil desires of the Miami ex-pat community that it has been overwhelming to experience the revolutionary love of Cubans who live here and want nothing more than to see Cuba successfully carry out its ambitious project.

In the US, education about Cuba is either so scarce or biased that most of us fear or hate Cuba without knowing what in the world we are talking about. We took three days to be re-educated on the history of the Cuban revolution, to get to know each other, as this is a trip that will require trust, and to understand how we should behave ourselves as visitors in a country that is struggling to succeed under the weight of the country that we live in and pay taxes to. We have spent the last three days trying to undo the programming of the tourism industry in our minds. The Cuban people are not dolls or maids. They are under no obligation to live up to whatever caricatures of Cuban people we have made up in our heads. The sun does not have to shine every day in Cuba while we are there. We are here to learn from the soil, from the people and from their project. We are expanding our capacity to be friends of the Cuban revolution.

This space was important because before leaving the country, we needed orientation. When you grow up in the US, or any capitalist society, there is a lot of anti-human, anti-social programming that you must work through before attempting to integrate yourself into someone else’s home. Capitalism encourages values like individualism. We see and hear this every day in the popular messages we receive via the media, “Me myself and I,“ “I’m self made,” “I don’t need nobody,” etc. These are not values conducive to traveling into a society where people have worked to shed individualist behaviors in favor of collective ones.

Among the 75 of us here, you can find many walks of life. People are here from the Palestinian Youth Movement. There are older white folks who have dedicated a majority of their lives to supporting the Cuban people and have visited the island many times. There is a man who was born in Cuba and sent away (not of his own will) at 12 years old. There are revolutionary African internationalists. There are Black labor organizers. There are three children under the age of 10. But what I am most excited about is that there is a large contingency of young, African and Indigenous organizers from the US SOUTH, particularly South Carolina and North Carolina. Not many of us knew each other upon arrival, but we have already begun to grow a camaraderie that must continue to flourish when we return. Before we have reached it’s shores, the revolutionary spirit of Cuba is embracing us from 90 miles away. We are ready to work.

I have many questions swirling around in my head as I prepare to touchdown in a land that for many years has existed in my imagination as a sacred place. All morning my heart has been beating really fast. I feel like I am about to make a pilgrimage. I am grateful to have had these three days to level my expectations and think about principled ways to engage when I arrive. I think it is no coincidence that over the months that I have been preparing to depart to Cuba, I have also been drawn toward the spirit Islam. Praise to be God (Alhamdulillah) for providing me with this opportunity to see and experience the reality of a place where people are fighting against all odds to create a different world.

Cuba, COVID-19, and ending the US blockade

The Road Ahead: Cuba After the July 11 Protests