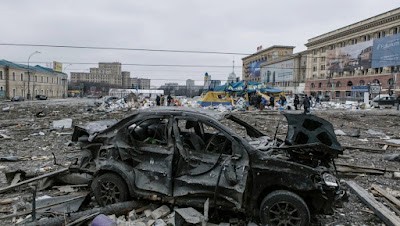 “Three decades
after the dissolution of the USSR and the imperialist war in Yugoslavia,
a new war broke out on European territory. The unacceptable Russian
military intervention and invasion of Ukraine has been prepared all the
previous years through the USA, NATO, and EU intervention, their support
for the reactionary government of Kyiv, the paramilitary mechanisms
andfascist groups in Ukraine as well as the plan for the economic,
political, and military encirclement of Russia.

Both the imperialist pretexts about
“defence”, “safety”, and “guarantees” as well as the hypocritical calls
for peace made by the USA, NATO, and the EU—which have massacred Syria,
Libya, Afghanistan, Mali, etc.— constitute a provocation. Putin’s
anti-communist slander against the Bolsheviks, Lenin, and the Soviet
Union is also unacceptable. He attempts to conceal the fact that the
same people and ethnicities that had been living in peace under
socialism for 7 decades are now experiencing the sufferings caused by
capitalist restoration.

Behind the pretexts used and the
unhistorical sermons lies the fact that this imperialist conflict
concerns the fierce competition between USA-NATO-EU and capitalist
Russia for market shares, the energy transport routes, and the spheres
of influence. The peoples pay a heavy toll for the consequences of this
competition both with their blood and with a new round of risingprices
of energy, fuel,and other consumer products.

It is in the peoples’ interest to deny
choosing an imperialist camp and to organize their own independent
struggle against imperialist war.

The peoples need to condemn the
bourgeois classes and governments of their countries, which are involved
in this war in a multifaceted way by missions abroad, Euro-Atlantic
bases on their territory, and an arms race for EU-NATO needs. They must
struggle for the disentanglement from imperialist plans and strengthen
the struggle for disengagement from the imperialist unions of NATO and
the EU so that the people are masters in their own land.”

Joint Statement of Communist and Workers’ Parties: No to the Imperialist War in Ukraine!