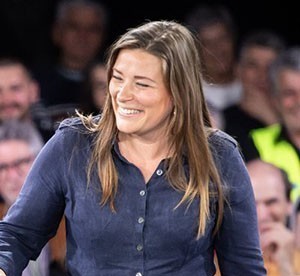 Interviewed by Andreas Thomsen, Deputy Head of Regional Coordination of the Rosa-Luxemburg-Foundation, on the outcome of the Danish municipal elections.

Eva Milsted Enoksen, long-time member of Red-Green Alliance, a former member of the Copenhagen party leadership and now candidate for the national parliament.

Andreas Thomsen: The Red-Green Alliance (Enhedslisten – De Rød-Grønne) scored a very good result in Copenhagen, coming in first place with 24.6%. Can you briefly describe the political situation? What were the reasons for this success from your point of view?

Eva Milsted Enoksen: The Red-Green Alliance (Enhedslisten, EL) had the best election results in our 32-year long history. With 24.6 % of the votes, we are now by far the largest party in Copenhagen, the second largest being the Social Democrats (SD) having had the catastrophic result of only 17.3 %. This is the culmination of a more than 10-year trend. It is the first time in over 100 years that the Social Democrats are not the largest party in the capital.

We can mention a few reasons why. First, there is the controversy of urban development in Copenhagen, where housing prices are exploding. Social Democrats, together with the right wing, the Social Liberal (RV), and Socialist People’s Party are planning to create an artificial island at the entrance of Copenhagen harbour with housing for 35,000 people. Their argument is the crisis of affordable housing. However, these apartments are to a large extent going to be sold on the free real-estate market, which means very expensive flats that no ordinary worker, let alone student or unemployed person, will be able to afford. The real reason behind the project is that the city is in debt and needs money to pay for a costly metro system. Moreover, the project will have a severe climate and environmental impact, and many oppose the growth logic behind the it: more (expensive) housing calls for more investments in infrastructure (including cars), which would be paid for by selling off more building plots to build more (expensive) housing, in turn requireing more infrastructure, etc. The environmentalist movement opposing this urban development in one of the very few nature areas in Copenhagen has, in fact, been very large…

Also, voters are now more concerned about the climate emergency. Here the Red-Green Alliance has an advantage over the Social Democrats, being traditionally both red and green and enjoying very strong support from young voters. Finally, the Social Democrats did not field a well-known top candidate. The Social Democratic Former Lord Mayor, (Frank Jensen, was forced to leave politics last year after a series of sexual harassment cases; but the new Social Democrat candidate is much less known in Copenhagen.

How does the municipal system work in Copenhagen? Will we see a Red-Green Lord Mayor of Copenhagen now?

Being the largest party does not necessarily translate into being awarded the lord mayor post in Copenhagen. To do this the system requires you need to form a majority of the 55 seats in the city council. Copenhagen has one lord mayor and six deputy mayors, each with a certain administrative autonomy. After elections, parties form loose alliances in order to form majority or minority groups that can then claim deputy mayor posts according to their size. A minimum of seven seats is required to name a deputy mayor, and 28 seats is required to name the lord mayor. The majority group gets to choose posts first. After this election, the Social Democrats quickly formed a group with three small far-right parties, the Conservatives, the Liberals, and the Social Liberals. This was not a major surprise as all these parties had previously declared that they would not tolerate a lord mayor from the far left. This majority group (32 seats) claimed the lord mayor post for the Social Democrat Sophie Hæstorp Andersen and three deputy mayor posts for the largest right-wing parties. The Enhedslisten together with the Socialist People’s Party and the Alternative formed a minority group (23 seats) and claimed two deputy mayors for Enhedslisten and one for the Socialist People’s Party.

Be that as it may, the election leaves the Enhedslisten in a stronger position. The party´s two deputy mayors are in charge of urban development, housing, energy, and environment, as well as social affairs. It is to be seen if this will mean a substantial change in development and priorities in Copenhagen such as many voters seem to have wanted. If the Social Democrats choose to work exclusively with the right wing in the next four years, it will leave Enhedslisten in the difficult position of having a strong electoral result but difficulties delivering major results. On the other hand, there is no doubt that the Social Democratic power position in Copenhagen has been weakened, and Enhedslisten might succeed in bringing along the Social Liberals, whose numbers just tip the scales in favour of Enhedslisten, on specific issues – such as the environment and climate mitigation – to form alternative majorities.

The challenges for progressive urban policy are similar in many large European cities, especially in the area of housing.  What do you think can be achieved in the next few years? Do you follow the debates in Berlin on this issue? Is there cooperation?

Many in the Enhedslisten have followed the successful referendum on remunicipalisation of housing in Berlin. That’s a great inspiration. The model we propose as a radical alternative to the current market-based development in Copenhagen is partly inspired by Vienna. We are campaigning for a rent cap. We propose that the municipality provide low-interest loans for non-profit housing. And we want to create a municipal fund for housing construction and urban renewal. All in all, we want 75%of new construction to be affordable housing.

You are explicitly a red and green party, an organisation that is committed to ecological transformation as well as socialist class politics. Doesn’t that create contradictions? How do you deal with them?

Actually, I don’t’ think there is a contradiction. The green transition is acutely necessary, and it is at the same time a unique opportunity to alter the capitalist logic and growth ideology defining most societies today.

Most parties in Denmark are painting themselves green. But their solutions vary widely. While the right wing has just recently accepted that there is in fact a genuine man-made crisis, Social Democrats have long been vocal about the need to act. However, this has not been a political priority for their actual politics, neither in Copenhagen nor in the national parliament. To a large extent, their strategy is the same as the right wing’s; we should invest in better technology, and that way we don’t need to change our society or the way we live and consume. This is also seen as good business for Denmark, which is already strong in green export technologies such as windmills, waste-to-energy, etc.

Enhedslisten is not against having a focus on new technologies but is also saying out loud that we need to fundamentally change the way we have organised our societies. In the city we don’t need more parking spaces for private cars; we need more space for cyclists and pedestrians and better and cheaper buses and trains. Of course, not all workers who depend on a car for their daily commute agree with us on this point, but here we choose the green focus over the (traditionally) red one.

In general, our green policies aim to benefit ordinary people not elites. The wealthiest countries, multinational enterprises, and the very rich are also the ones with the largest carbon footprints. We need to make sure that they are also the ones paying the lion’s share of the bill for the transition.

Thanks you for the interview!