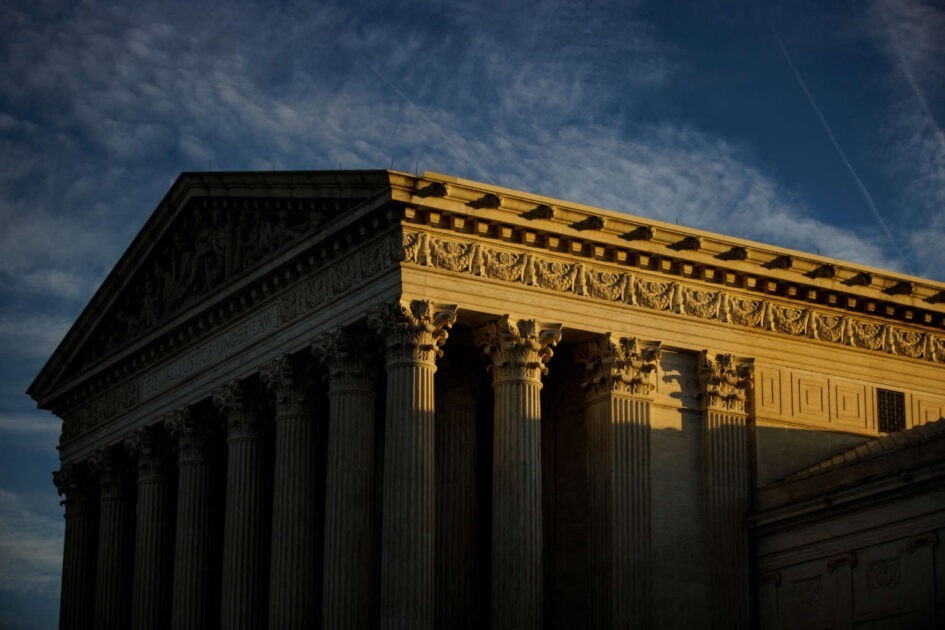 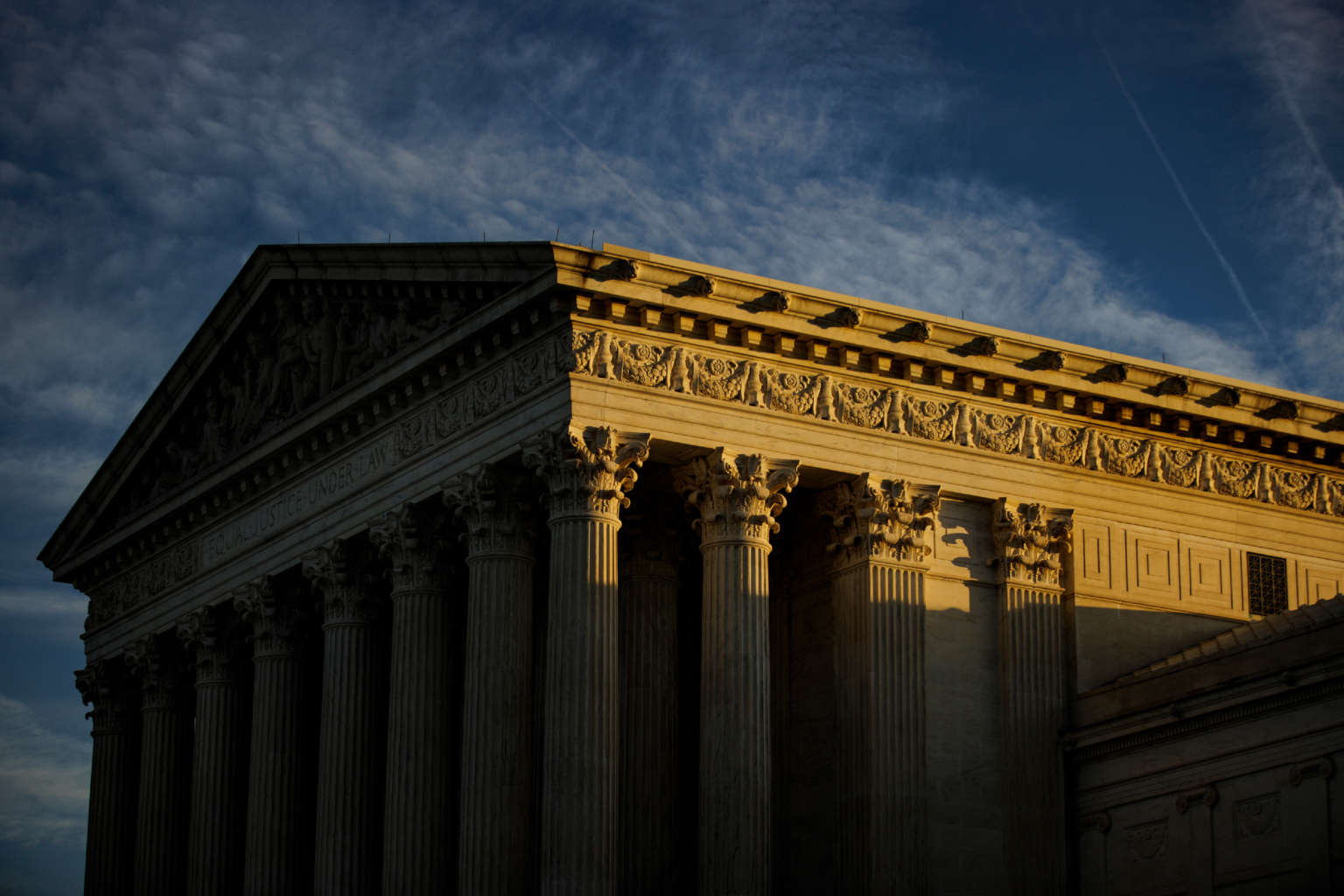 Above Photo: The rising sun creeps across the Supreme Court on November 8, 2022, in Washington, D.C. (Samuel Corum / Getty Images).

Recent exposés have uncovered an emerging pattern of improper lobbying of right-wing Supreme Court justices by wealthy evangelicals. They reveal serious threats to the independence of the judiciary. But equally alarming is that the Supreme Court is unconstrained by a code of judicial ethics.

From 1995 to 2018, the right-wing evangelical nonprofit Faith and Action executed “Operation Higher Court.” It was an organized and systematic campaign “to wine, dine and entertain conservative Supreme Court justices while pushing conservative positions” on social issues pending before the court, *Politico* reports.

Faith and Action “would rehearse lines” in order “to influence the justices while steering clear of the specifics of cases pending before the court.” Faith and Action reportedly arranged for 20 couples to travel to Washington, D.C. to wine and dine Samuel Alito, Clarence Thomas and Antonin Scalia.

In 2014, Alito dined with evangelical lobbyists who left with inside knowledge that Burwell v. Hobby Lobby would go their way. Sure enough, three weeks later, the Supreme Court issued its decision in Hobby Lobby, holding that corporations that claim religious objections can refuse to fund contraception required by the Affordable Care Act. Alito wrote the majority opinion.

It is likely not a coincidence that both decisions served the conservative evangelical agenda and both were leaked by people with advance knowledge of the results. Although the right-wing members of the court had probably already made up their minds in these two cases, the leaks were apparently designed to strengthen their resolve.

The “Ministry Of Emboldenment”

The operation was called the “Ministry of Emboldenment,” Jodi Kantor and Jo Becker reported in their explosive November 19 New York Times article, quoting whistleblower Rev. Rob Schenck who used to run Faith and Action. Its goal was to “embolden the justices” to write “unapologetically conservative dissents.”

Schenck “said his aim was not to change minds, but rather to stiffen the resolve of the court’s conservatives in taking uncompromising stances that could eventually lead to a reversal of Roe,” Kantor and Becker wrote.

For years, Schenck was at the center of the anti-choice movement. “He gained access through faith, through favors traded with gatekeepers and through wealthy donors to his organization, abortion opponents whom he called ‘stealth missionaries,’” according to Kantor and Becker. Schenck even bought a building across the street from the Supreme Court to facilitate his campaign.

Schenck recruited rich donors and urged them to invite some members of the Supreme Court to dinner, vacation homes and private clubs. He encouraged them to contribute to the Supreme Court Historical Society, schmooze the members of the court at their functions and invoke “biblical truth.” Schenck established close relations with court officials who provided him with access.

“You can position yourself in a special category with regard to the Justices,” Schenck told The Times. “You can gain access, have conversations, share prayer.”

Alito, Thomas and Scalia were receptive to these overtures. Schenck prayed with Scalia and Thomas in their chambers, invoking “the sanctity of human life” to encourage them to end abortion.

In June 2014, Gayle Wright, one of Schenck’s largest donors, had dinner with Alito and his wife Martha-Ann. Schenck said that the “Wrights had strongly conservative views on abortion, homosexuality and gun rights, and dedicated themselves to reinforcing the Supreme Court justices’ own conservative views on these issues.”

The next day, Wright emailed Schenck, “Rob, if you want some interesting news please call. No emails.” Schenck said that Wright told him Hobby Lobby would be decided the way they wanted and Alito would write the majority opinion.

Both Alito and Wright denied the truth of Schenck’s report.

But The Times located contemporaneous conversations and emails, and Politico provides a timeline that corroborates Schenck’s account of what Wright told him.

Schenck reported to the Christian magazine Charisma that he met and prayed with Scalia just 24 hours after the court issued Bush v. Gore, which handed the 2000 presidential election to George W. Bush.

“The Supreme Court is the most insulated and isolated branch of the U.S. government,” Schenck told Charisma. “They do not interface with the public, so we’ve literally had to pray our way in there each step of the way.”

Now Schenck’s views on abortion have changed. He broke with the religious right and seeks to establish himself as a progressive evangelical leader. “What we did was wrong,” he said.

“If evangelical activists or lawyers are wining and dining judges and/or Supreme Court Justices, that certainly creates an appearance of impropriety,” Suffolk Law School Professor Emeritus Michael Avery told Truthout. “The justices are not subject to the Judicial Conduct Code, but they should be,” added Avery, who is coauthor of The Federalist Society: How Conservatives Took the Law Back from Liberals.

Other Judges Must Avoid Even The Appearance Of Impropriety

The Code of Conduct for United States Judges (“Code of Conduct”) requires an independent judiciary. Although lower court judges are bound by it, the Supreme Court is not. Chief Justice John Roberts, however, claims that the members of the court “consult” the Code of Conduct.

Here are some of the provisions of the Code of Conduct:

Canon 1 requires judges to uphold the integrity and independence of the judiciary. That depends “on their acting without fear or favor.”

Canon 2 says that judges “should avoid impropriety and the appearance of impropriety” and “not allow family, social, political, financial, or other relationships to influence judicial conduct or judgment.”

“An appearance of impropriety occurs when reasonable minds, with knowledge of all the relevant circumstances disclosed by a reasonable inquiry, would conclude that the judge’s honesty, integrity, impartiality, temperament, or fitness to serve as a judge is impaired.”

Canon 2 also states that judges should not “convey or permit others to convey the impression that they are in a special position to influence the judge.”

Canon 4 forbids a judge from participating “in extrajudicial activities” that “reflect adversely on the judge’s impartiality.” That canon says: “A judge should not disclose or use nonpublic information acquired in a judicial capacity for any purpose unrelated to the judge’s official duties.”

Supreme Court members, like other judges, must recuse themselves from cases in which their impartiality may reasonably be questioned. But members of the Supreme Court rarely provide reasons for their failure to recuse and there is no means of enforcement if they refuse to properly recuse themselves.

Title 28, Section 455 of the United States Code says, “Any justice, judge, or magistrate judge of the United States shall disqualify himself in any proceeding in which his impartiality might reasonably be questioned” or when his spouse “is known by the judge to have an interest that could be substantially affected by the outcome of the proceeding.”

Clarence Thomas’s wife Virginia (“Ginni”) has been a prominent proponent of the “Big Lie” that the 2020 presidential election was stolen from Donald Trump. She texted then-White House Chief of Staff Mark Meadows 29 times urging him to reverse the election results and falsely told Republican state legislators in Arizona and Wisconsin that the authority to choose electors was “theirs and theirs alone.” This implicates the “independent state legislature” theory, which maintains that only state legislatures can draw congressional maps with no review by state courts. That theory is at issue in Moore v. Harper which is now pending in the Supreme Court.

Thomas, however, is unlikely to recuse himself in Moore. He issued a temporary stay of a federal appellate court ruling ordering Sen. Lindsey Graham (R-South Carolina) to comply with a subpoena to testify before a Georgia state grand jury in a criminal investigation into efforts to overturn the 2020 presidential election. The full Supreme Court later lifted Thomas’s stay and ruled that Graham must testify.

On September 7, Sen. Sheldon Whitehouse and Rep. Henry Johnson — chairmen of the Senate and House Judiciary Federal Courts Subcommittees — wrote a letter to Chief Justice John Roberts. They asked the Supreme Court to list dinners, travel, lodging, and other hospitality received by the justices and paid for by Faith and Liberty, and its predecessor Faith and Action. They also asked if any justices were aware of Operation Higher Court at any time before the recent news reports. And they asked whether any of the justices who accepted dinners, travel or lodging knew that the gifts were part of Operation Higher Court. They also urged the court to adopt a code of conduct without delay.

On November 7, Roberts and Supreme Court legal counsel Ethan Torrey answered Whitehouse and Johnson’s letter. They wrote that “the Justices rely on the Code of Conduct for United States Judges in evaluating ethics issues.” But they did not respond to the chairmen’s questions about the relationship between the justices and Operation Higher Court.

On November 20, Whitehouse and Johnson wrote a letter to Roberts and Torrey, asking whether the court had opened an investigation into the allegations involving Faith and Action. The two chairmen also asked whether the court had reevaluated any of its practices, procedures or rules on judicial ethics and the receipt and reporting of gifts and travel.

But as Dahlia Lithwick wrote at Slate, “this court will keep burning its own legitimacy candle at both ends. They don’t even recognize it as a problem. The unfettered and lucrative sucking up, lobbying, and currying of favor — and the attendant rewards — are all recast as harmless socializing.”

Indeed, on November 28, Torrey wrote to Whitehouse and Johnson, reiterating the denials by Alito and Wright and stating, “There is nothing to suggest that Justice Alito’s actions violated ethics standards.”

In their November 20 letter, Whitehouse and Johnson wrote, “If the Court, as your letter suggests, is not willing to undertake fact-finding inquiries into possible ethics violations that leaves Congress as the only forum.”

Congress should enact the Supreme Court Ethics, Recusal, and Transparency Act of 2022, which was passed by the House Judiciary Committee in May.

“We expect the justices of our nation’s highest court to hold themselves to the highest standards of ethical conduct, but, in fact, their conduct too often falls below the standards that most other government officials are required to follow,” Committee Chairman Jerrold Nadler said. He cited “recent, high profile ethical lapses on the Supreme Court, including Justice Thomas’s refusal to recuse himself from a case regarding his wife’s involvement in January 6th activities.”

There are calls for an investigation of Schenck’s disturbing allegations. “The Senate Judiciary Committee should immediately move to investigate the apparent leak by Justice Alito,” Brian Fallon, executive director of Demand Justice, said. “The whistleblower in this report, Rev. Rob Schenck, should be called to testify about both the leak and the years-long lobbying effort he once led to cultivate Alito and other Republican justices.”