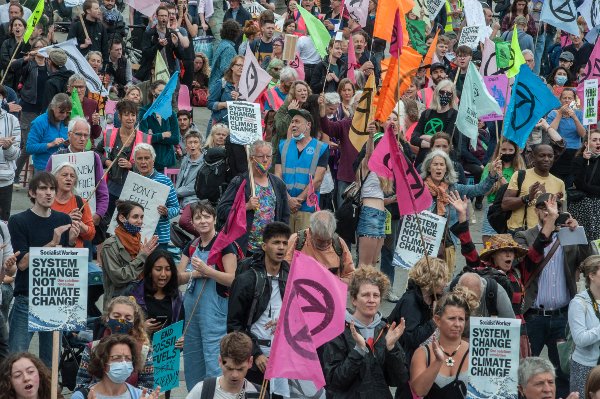 Extinction Rebellion (XR) kicked off their fourth major rebellion on Monday which they have named, “The Impossible Rebellion.”

On Sunday over 200 XR rebels gathered outside the Guildhall in Central London. A handful of activists scaled the building and set off red flares.

XR said that this action was to target the capital’s financial district.

On Monday morning more than a thousand activists gathered in Trafalgar Square with one instruction—to bring a chair. This is to open a round table discussion with the general public regarding the climate and ecological emergency and what to do next.

Michael is new to XR, he told Socialist Worker that at the root of the climate crisis is the “concentration on profit“.

“It doesn’t seem like an emergency to those in power,” he added.

Activists heard speeches from the XR International Solidarity Network, including some activists from Haiti.

Istem is from Turkey. She told Socialist Worker that she was pushed to join the rebellion after seeing the extreme weather events that have occurred in recent months.

“In Turkey the wildfires mostly killed poor people, they suffered the most,” she said.

“Also, Britain dumps millions of tonnes of rubbish in Turkey. Rich countries everywhere are dumping in poor ones.

“For me, it’s easy to see where the problem is coming from.”

Ellie is an XR member from Medway, Kent. She decided to rebel because of the threat that the climate crisis poses to humanity and the lack of action from those at the top.

“Those in power don’t seem to understand that if we don’t act we’ll have no future.

“And yet it’s still poor people that are often blamed for not making ‘sustainable choices’. It’s not people on low incomes who are driving this crisis, it’s the rich,” she said.

Activists in the crowd carried the flag with XR’s iconic hourglass logo. Banners read, “How many more pollution deaths” and “Stop denying the planet is dying.”

Many activists carried placards that opposed plans for the construction of the new Cambo oil field, west of the Shetland Isles. Caroline is part of the XR Scientists group she believes the proposed oil field would be “criminal”.

“For this rebellion, we have very specific demands,” she said. “We want to stop the drilling and extraction of fossil fuels.

After speeches in Trafalgar Square rebels marched from there to St. Martins Lane.

The march was able to distract the police as activists erected a massive pink table. Sound systems and hundreds of chairs were also set up in the square.

As crowds settled into the square, the police very quickly established lines to trap activists inside the square.

Anna is an NHS nurse who travelled from Leeds to be part of the rebellion. She told Socialist Worker that she is already noticing the impact of the environmental crisis on her patients.

“We are seeing increasing numbers of patients coming in with respiratory problems caused by air pollution,” she said.

“It’s scary and heartbreaking to see. I had to come to the rebellion to do something.”

Anna pointed out that the newest Intergovernmental Panel on Climate Change report was terrifying but also should be a call to action.

“It said that the climate crisis is without a doubt man-made,” she said. “I hope it provided a wake-up call for people like the last report did three years ago.”

The rebellion will be ongoing for two weeks with various actions planned.

The state has been stepping up the repression against XR in the last year, and they will likely want to crush the rebellion as quickly as possible.

Climate activists and socialists everywhere must support and build the rebellion.

For more information about how to join the rebellion go to extinctionrebellion.uk/next-uk-rebellion