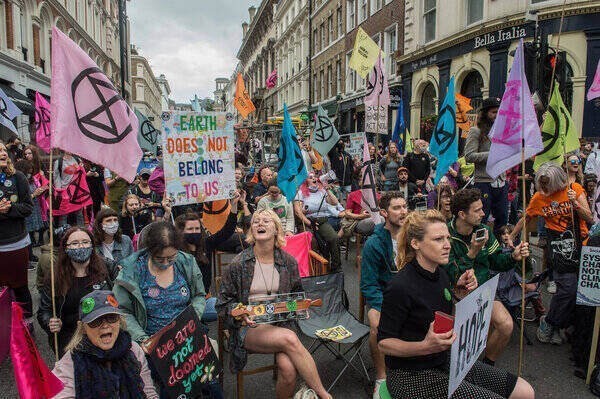 Climate activists took the streets of central London on Monday as part of the ‘Impossible Rebellion’ (Pic: Guy Smallman)

Extinction Rebellion (XR) activists entered their third day of protest on Wednesday as part of the Impossible Rebellion, taking part in actions across central London.

In the morning XR joined with several charities, including Greenpeace, at the Brazilian embassy for a protest to say no to the destruction of the Amazon rainforest.

They called out his damaging views on the climate, handling of the pandemic and terrible treatment of minorities.

Lusiana is originally from Brazil. She told Socialist Worker that the struggle for indigenous rights and climate justice go hand in hand.

“Indigenous people’s homes, practices and culture are being destroyed by the presidency of Bolsonaro,” she explained.

“He has also sided with the agriculture bosses who want to destroy the Amazon. And of course, agriculture on such a large scale will be having a damaging effect on the planet.”

A short walk from the Brazilian embassy at Piccadilly Circus women, non-binary and trans activists gathered for more action.

Speakers were clear to highlight the plight of women in the climate crisis, and also called for unity. The crowds also chanted, “Black Lives Matter” and “Black Trans Lives Matter”.

Susie travelled from Totnes in Devon to be at the rebellion. She told Socialist Worker about the work she and other rebels have been doing in the lead up to the Impossible Rebellion.

“We organised banner drops and campaigned outside banks to highlight their unethical and ecologically damaging practices,” she said.

“People have to look at the IPCC report as code red for humanity. There might be some moves being made by those in power but it’s too slow and too late.”

Joanna, another protester, said that they had joined the rebellion because of the hypocrisy of leaders who talk about been climate leaders yet do nothing.

“I have no hope that the Cop26 talks will do anything. We need radical policies but those in power are just not prepared to do what is needed,” they added.

“We need to build protests against Cop26 as big as possible. We need to show that those in power are going against the people’s will by not addressing the crisis.”

Rebels then marched towards Oxford Circus, where smaller feeder marches joined and swelled the crowds to more than 500. At Oxford Circus, XR activists set up an occupation. Structures were built from pink crates that people were able to lock and glue themselves onto.

The police quickly attempted to forcibly remove those sitting on the ground.

One XR medic said that a police officer forcibly removed a woman who had glued their hands to the floor. She sustained injuries from the incident that had to be treated.

Mary from Dover pointed out that it is always the police who escalate fear and panic.

“You really see what kind of world we live in when you come to XR’s rebellions,” she said. “You see the police suppressing climate protesters—you see which side they’re on.

“And as you march through the streets of central London the divides between the rich and the poor are also so clear.”

She asked, “If we don’t what have we got ahead of us? More droughts? Wars over water? We need to keeping fighting for the future of the next generation.”

The Impossible Rebellion is making it clear that the solution to the climate crisis will mean changing the present system. And its also clear that drastic action must be taken now.