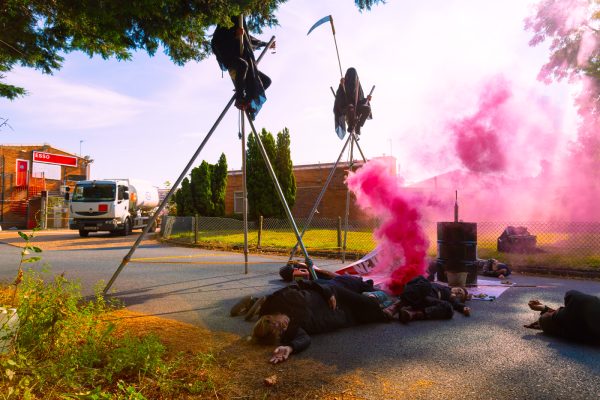 The action comes ahead of the launch of the next major rebellion beginning in London on Monday. It has the immediate demand of “stop all new fossil fuel investment now”.

XR is right to say that only fundamental change “can even begin to set limits on the scale of death, destruction and mass extinction that climate change brings”.

From around 9am climate campaigners dressed as Grim Reapers and mounted on two metre high steel tripods blocked the entrance to ExxonMobil’s Hythe Terminal at Fawley Refinery.

Below them a protester dressed as an ExxonMobil executive, in a faceless mask, pumped fake blood from an oil barrel. Others held a die-in.

Protester Jon Kennedy, a mechanical design engineer from Brighton, said, “The impacts of just 1.1 degrees increased heat are all around us.

“From the droughts that bring massive forest fires to the increased evaporation that’s resulting in fatal flooding.

“These impacts are coming faster than predicted, yet worse is to come and soon it could be beyond human control to set limits on heating as more climate feedback loops are triggered.”

ExxonMobil has begun a massive expansion of its diesel production facilities at Fawley. This is alongside laying a new, larger bore pipeline to supply Heathrow and other airports with ever greater quantities of fossil fuel.

Irrefutable evidence shows that ExxonMobil has known about the devastating effects of fossil fuel production on the environment for over 40 years. It concluded in 1979 that it “will cause dramatic environmental effects” in the coming decades and said “the potential problem is great and urgent”.

Yet, instead of acting, it has spent tens of millions funding climate denial and misinformation and obstructing a transition to cleaner energy sources.

The protesters pledged to continue their blockade until the Fawley management come to the gates to answer their concerns.

James Knapp, a photographer from Dorking who took part in the action, said, “The IPCC report released on 9 August is a Code Red for Planet Earth.

“ExxonMobil’s expansion of production at Fawley is another nail in our coffin. We call on the government to act now to stop all new investment in fossil fuels.”

For details of XR’s actions from Monday 23 August go to bit.ly/XR2308