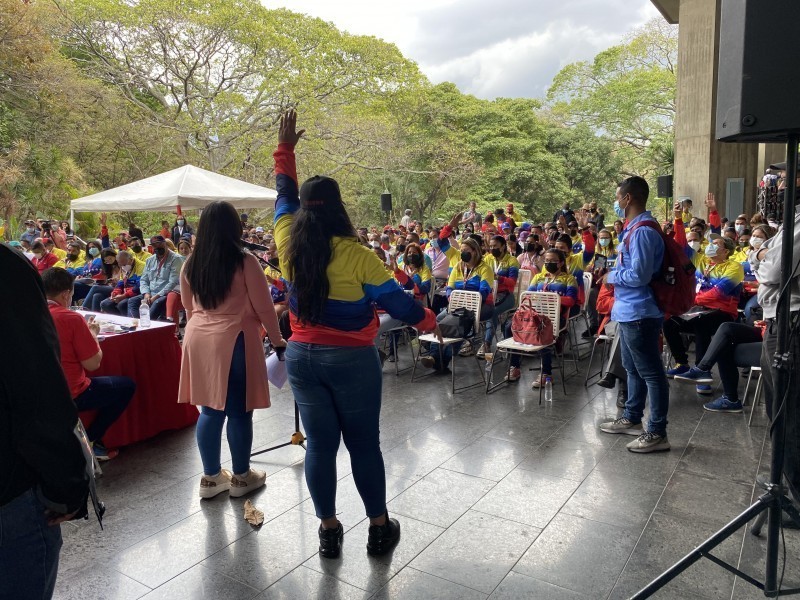 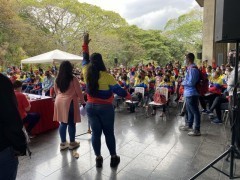 Caracas, Venezuela – Day three of the PSUV 5th Congress began on March 8, with thousands filling the large auditorium again as Afro-Venezuelan dancers took to the stage and Caribbean coast music filled the air. The Chavista delegates smiled and swayed to the steady rhythm of folkloric songs about the Bolivarian Revolution. PSUV militants came prepared to listen to speeches and consider the changing conditions and forces in motion, explanations of errors, questions about how to achieve new goals, and implementation of the Three R’s: Resistance, Rebirth, and Revolution.

Luis Brito Garcia, a professor, spoke on ethics, responding to the arrest of a mayor and others in a drug smuggling scandal. He taught theory, using the ideas of ancient and modern philosophers. He gave people the words and ability to discuss and formulate anti-corruption campaigns within the party and society. He warned against relying too much on criminal justice systems and courts to obtain good outcomes.

His entertaining style included teaching hard lessons from the U.S. He warned of the weaknesses and problems of relying on prohibition laws to deal with drugs. He explained how U.S. prohibition of alcohol caused large mafia gangs and criminal families to arise, including the Kennedys, who smuggled whiskey. He also challenged the current casino culture in Caracas and its role in society. At one point he joked that the U.S. failures to undermine Venezuelan society might lead the White House to consider, “using Amazon to make the invasion.”

Later that day, thousands rose to their feet when Venezuela Vice President Delcy Rodriguez was introduced by current Minister of Education Eduardo Pinate. Rodriguez spoke of the PSUV leaders setting an example and the role of the Units of Battle Hugo Chavez (UBCH). The UBCH is the basic party and self-defense unit, organizing as a political body of the grassroots that elected officials must be responsible to.

Rodriguez explained how the party and state needed to act together to meet the needs of the people, repairing derelict hospitals, abandoned by private owners. Rodriguez described the party organizing health brigades that sought out sick people during COVID, to both stop the spread and provide the best treatment possible. Venezuela has one of the highest vaccination rates, and lowest death rates in the world.

On an international level, Rodriguez spoke of how capitalism causes war, including the war in the Ukraine. She asked, “What is the U.S. purpose of aggression against Russia? Why not peacefully settle conflicts?”

She explained Venezuela experienced 500 years of violence and environmental destruction by foreign interests, that continues today with U.S. raids and sanctions.

Rodriguez ended her speech by saying, “This is a meeting of the working class, of women and youth. We need to use the ‘one times ten’ method to consolidate the revolutionary state. We are consolidating people’s power on the road to socialism!”

In the late afternoon, PSUV delegates attended breakout sessions where one after the other they rose and spoke to proposals according to sectors and issue. Their passionate arguments were well thought through and based on summations of local experiences. After back-and-forth debates on proposals, the outdoor gatherings of hundreds would raise their hands to vote up or down.

Landslide victory for Maduro and the PSUV in Venezuelan election

Averting Disaster: Declaration of the 5th European Forum of the Left

Venezuela: How did the PSUV lose the local elections in Chávez’s home state?